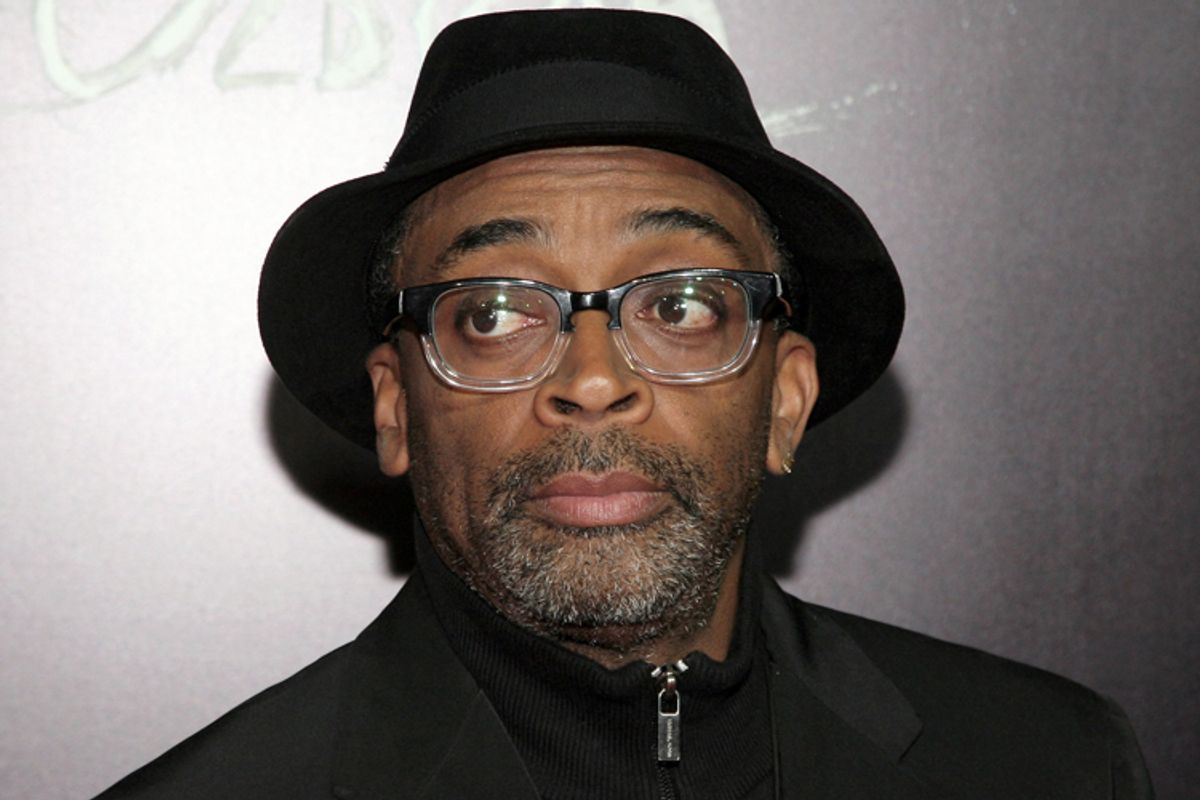 Filmmaker Spike Lee has never been one to hold back his feelings. This, after all, is a man who's compared Tyler Perry to Amos n' Andy and said that Clint Eastwood ought to have an encounter "with a .44 Bulldog." And at an African American History Month lecture at Pratt Institute Tuesday evening, he had some strong words for the mostly local crowd, this time about "the other side" of gentrification. His response to an audience member who brought it up: "Let me just kill you right now."

Lee, who's been famed for his explorations of class tensions and community ever since his groundbreaking 1989 "Do the Right Thing," went on to expound about "some bullshit article in the New York Times saying ‘the good of gentrification.'" As Joe Coscarelli reports Wednesday in New York, Spike told the crowd, "I don’t believe that" before launching into an expletive-laced seven-minute discourse on the G-word.

"I grew up here in Fort Greene," he explained. "I grew up here in New York. It’s changed. And why does it take an influx of white New Yorkers in the south Bronx, in Harlem, in Bed-Stuy, in Crown Heights for the facilities to get better? The garbage wasn’t picked up every motherfuckin’ day when I was living in 165 Washington Park … The police weren’t around. When you see white mothers pushing their babies in strollers, three o’clock in the morning on 125th Street, that must tell you something."

But what, exactly, does it tell you? Earlier this month, the reliably rage-inducing Times Real Estate section ran a piece on the controversial "Case for and Against a Bed-Stuy Historic District," a piece on what's still one of the most dangerous, crime-riddled neighborhoods in New York City that came replete with dainty captions like "In Bed-Stuy, many a playful turret is to be found." And New York magazine recently asked, "Is Gentrification All Bad?" in a story that focused heavily on the "Dickensian juxtapositions" of changing lower-class New York neighborhoods like Inwood, where I've lived for the past eight years. My family and I moved here when we were squeezed out of our old, insanely gentrifying neighborhood in – where else? – Brooklyn. Now Inwood has become the subject of much of the recent conversation around gentrification. The Wall Street Journal sat up and took notice last month when the mostly Dominican area got its very first Starbucks -- where it naturally began offering overpriced, "exclusive" café con leche.

With his trademark passion and irritability, Lee made strong points Tuesday night about the exasperation felt by long-term residents when newcomers arrive with an inflated sense of entitlement. "The motherfuckin’ people moved in last year," Lee said, "and called the cops on my father. He doesn’t even play electric bass! It’s acoustic!" And he certainly can't be argued with regarding his questions over "Why did it take this great influx of white people to get the schools better? Why’s there more police protection in Bed-Stuy and Harlem now? Why’s the garbage getting picked up more regularly? We been here!"

Yet in Lee's eagerness to be enraged, he glosses over the profound complexities of neighborhood flux. He rather dramatically announces that "You can’t just come in the neighborhood and start bogarting and say, like you’re motherfuckin’ Columbus and kill off the Native Americans. Or what they do in Brazil, what they did to the indigenous people." The opening of a Connecticut Muffin shop is not now nor ever will be akin to genocide. And Lee can rail about "the white people" moving in, but that simplistic breakdown ignores issues of income and class.

I'm a white mom in a racially and socially diverse neighborhood, but I'm certainly at an exponentially lower socioeconomic level than Mr. Spike Lee. As are plenty of working families looking for affordable housing in an increasingly prohibitive market. Where are we all supposed to go? And though Lee can rightly question why it takes an influx of newcomers for the public schools to improve and the police presence to increase and the garbage to get picked up, there's also no denying that most of us – of all races and classes -- prefer to live in places with better public schools and lower crime and regular garbage pickup. The conflict that arises is, what happens when you start to get those things, and with them comes an artisanal cheese shop?

The challenges faced now are the same one Jane Jacobs wrote about beautifully over 50 years ago in "The Death and Life of Great American Cities," the same ones Lee himself confronted 25 years ago in "Do the Right Thing." How do we support the existing community of a neighborhood while welcoming newcomers? How do we improve living conditions for everybody, without pushing people out? These are hard issues for those of us who live in and love our neighborhoods and the people who inhabit them. They require considerably more than the untrammeled greed of real estate developers and trust fund kids looking for someplace edgy, but with kombucha. They also require more than just being pissed off. But though Lee is very much a mixed bag on the subject of gentrification, where he is correct is in his assertion that whoever you are, "You can’t just come in when people have a culture that’s been laid down for generations and you come in and now shit gotta change because you’re here?" As he says, "Get the fuck outta here."