Amid a backlash, Rowe likens emails critiquing his Wal-Mart ad to "a bag of dog crap set ablaze on my front porch" 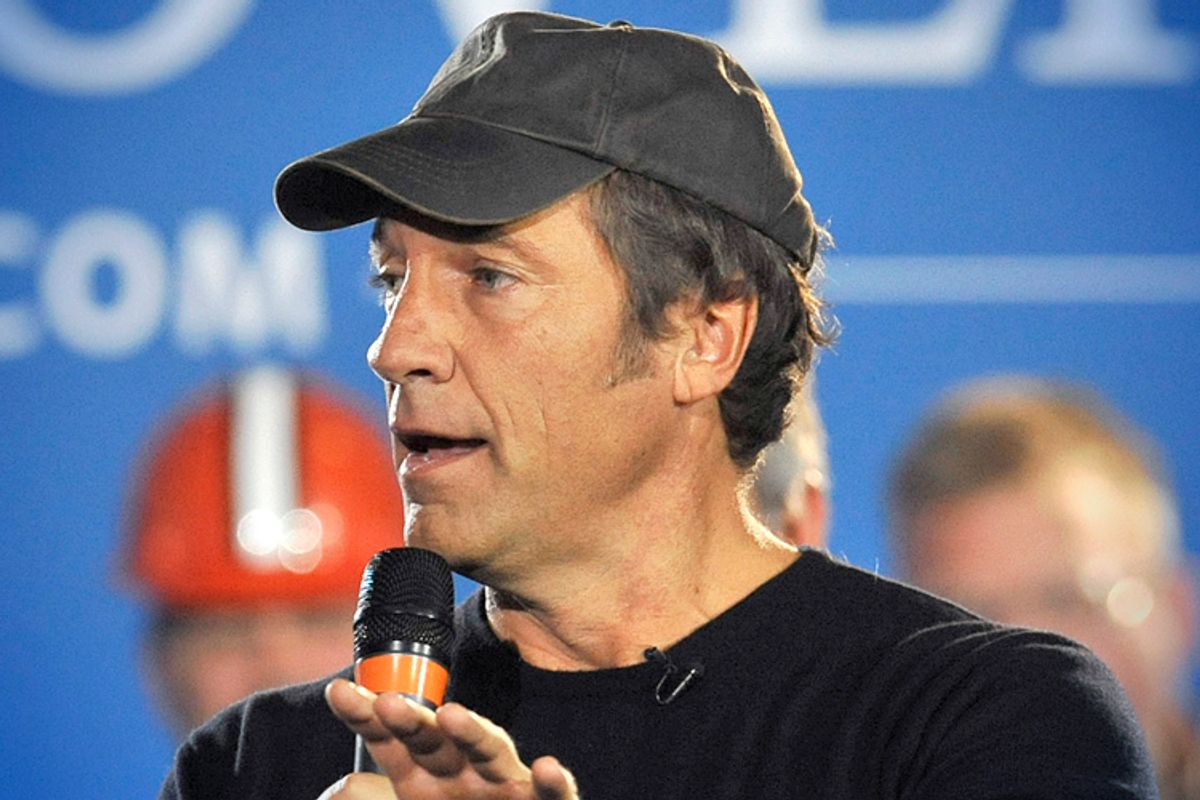 “Dirty Jobs” star Mike Rowe pushed back against Wal-Mart critics Monday, comparing a mass email campaign to “a bag of dog crap set ablaze on my front porch” and urging that “unhappy” workers apply for scholarships from his foundation because their “jobs could very well become obsolete in just a few years.”

Rowe has drawn waves of praise and scorn since narrating an ad for Wal-Mart, the largest private employer in the world. In the ad, “I Am a Factory,” which began airing during the Olympics, Rowe states, “We will build things and build families and build dreams.”

The Wal-Mart ad’s on-screen text touts Wal-Mart’s commitment to put “$250 billion to work to help create new manufacturing jobs in America” over the next decade. Reuters reported last September that “In many cases, Wal-Mart’s suppliers had already decided to produce in the United States, as rising wages in China and other emerging economies, along with increased labor productivity and flexibility back home, eroded the allure of offshore production.” Rowe and Wal-Mart did not respond to Wednesday inquiries.

In a Monday post on his Facebook page, Rowe offered the latest in a series of responses to critics who’ve cited recent Wal-Mart controversies. Rowe wrote that Wal-Mart’s “$250 billion investment in US manufacturing is worth talking about,” and “I’m happy to ‘shill’ for any company that gets this country back to work.” Rowe then turned to a CBS story on the controversy, taking issue with the reporter’s framing and word choice, emphasizing that he was not “empowered to speak on Walmart’s behalf in some sort of official capacity,” and then offering an open letter to Jobs With Justice press secretary Ori Korin, who was quoted in the CBS piece saying Rowe had “dismissed people’s concerns.”

Jobs With Justice, a labor-backed nonprofit, has helped organize protests in support of striking Wal-Mart workers over pay, hours and alleged retaliation. It urged its members (mostly not Wal-Mart employees) to send Rowe an email supporting Wal-Mart workers who've asked him for a meeting; the message drafted by JWJ says Wal-Mart workers “deserve more than their dirty jobs, and they deserve to be heard.”

Addressing Korin by name, Rowe said he was “sympathetic to your objectives and sensitive to the needs of your members,” but that having 5,048 people email his office “had the same effect as a flood of telemarketing calls during my dinner, or a bag of dog crap set ablaze on my front porch.” Rowe called it “ironic” that a group concerned about excessive workloads didn’t “think twice about flooding an unsuspecting non-profit foundation with an endless stream of form letters,” and warned that another 5,000 “just might inspire the nice woman who oversees my foundation to throw herself out the window.”

Rowe wrote that his foundation didn’t “take sides between employers and employees,” but that he was “trying to encourage hardworking people who are unhappy in their jobs to make a meaningful change in their life. A lasting change.” Arguing that “Our country has a massive skills gap, and the chance to retool and retrain has never been better,” Rowe wrote that while JWJ was “trying to wring out a modest increase for people who feel unappreciated by their employer and unhappy in their work,” Rowe instead was “trying to get those same people excited about possibilities and opportunities that go beyond their current positions.” He  added that he didn’t believe Jobs With Justice’s strategy was “in the long-term interest” of “anyone who wants to improve their lives in a meaningful way.”

“Think about it, Ori,” added the “Dirty Jobs” star. “Many of the workers you represent have jobs that could very well become obsolete in just a few years. Automation, technology, automatic checkouts … the writing is on the wall. But the skilled trades are different.” Saying, “I want to help,” Rowe asked Korin to forward “your members” a link to a page that describes his foundation’s “current partnerships and scholarship opportunities for high school seniors wanting to learn a skill.” The page notes that applicants would need to submit a signed “S.W.E.A.T.” (“Skills & Work Ethic Aren’t Taboo”) Pledge.

Progressive economists have cast doubt on whether skills-mismatch is a major cause of U.S. economic strife. “Of those who have looked at the data, you just don’t find evidence that the problem right now is due to workers not having the right skills,” the Economic Policy Institute’s Heidi Shierholz told Salon last month. If it were, she argued, “you would have to see some evidence in some meaningfully sized group of workers of actually tight labor markets relative to 2007,” and thus “you’d see wages being bid up for the workers who can’t be found.” Instead, she said, “You actually find basically no group that is even seeing wage growth keep pace with overall productivity growth.” Center for Economic and Policy Research economists John Schmitt and Janelle Jones have also questioned whether education can explain what’s ailed U.S. workers over recent decades, estimating that the share of “good jobs” actually declined between 1979 and 2010 – including for college graduates -- even as the ranks of U.S. workers with advanced degrees nearly doubled. “The question,” Schmitt told Salon last year, “is how do we reconstruct bargaining power for workers?”

Wal-Mart, the world’s largest private employer, has repeatedly been accused of flouting the law in order to shut down efforts by workers to secure power on the job. Last month the National Labor Relations Board announced it was issuing a complaint (similar to an indictment) on allegations including the firings of workers who participated in strikes by the union-backed group OUR Walmart last year. Wal-Mart stated in November that its employees average “close to $12.00 an hour”; OUR Walmart has seized on a September statement to Goldman Sachs, touting that “over 475,000” U.S. employees made more than $25,000 in the previous year, as evidence that the majority of Wal-Mart’s U.S. workforce falls below that threshold. The retail giant has also drawn scrutiny over the past year on issues including the deaths of Bangladesh garment workers in factories that supplied Wal-Mart clothes, alleged discrimination against female workers, and evidence of illegal bribery abroad.

Asked Wednesday about Rowe’s open letter to her, Korin told Salon she would have preferred Rowe respond to Wal-Mart workers seeking a meeting, rather than to her. “Our main goal,” she said, “is to turn the focus back to our original request, which is that he sit down with Wal-Mart workers and hear what it’s like to really work there.” In an open letter of its own, released Thursday, Jobs With Justice thanked Rowe for responding but said it was "hard for us to trust Walmart's promise" on manufacturing, given that after a past such pledge, "the Alliance for American Manufacturing reports that Walmart actually upped its overseas purchasing and increased pressure on its suppliers to reduce costs, even if that meant outsourcing at our economy's expense."

Jobs With Justice saluted the work of Rowe's foundation, but wrote that far from being "increasingly obsolete," "retail workers -- the ones who work at Walmart and other stores (and the ones who likely sold you that amazing bathrobe) -- belong to one of the fastest growing industries in our country and also one of the lowest paid." The group said it was "working to create an economy that doesn't have to rely on the generosity of people like you and the work of your foundation -- private companies like Walmart can and should pay their workers enough to make ends meet."

"Even without our emails," the activist group told Rowe, "you've drawn some incredible attention to yourself as it relates to this issue. All we're asking is that Wal-Mart workers have a chance to have their voices heard as well."