The show plays it safe, but Pharrell and Matthew McConaughey add surprises 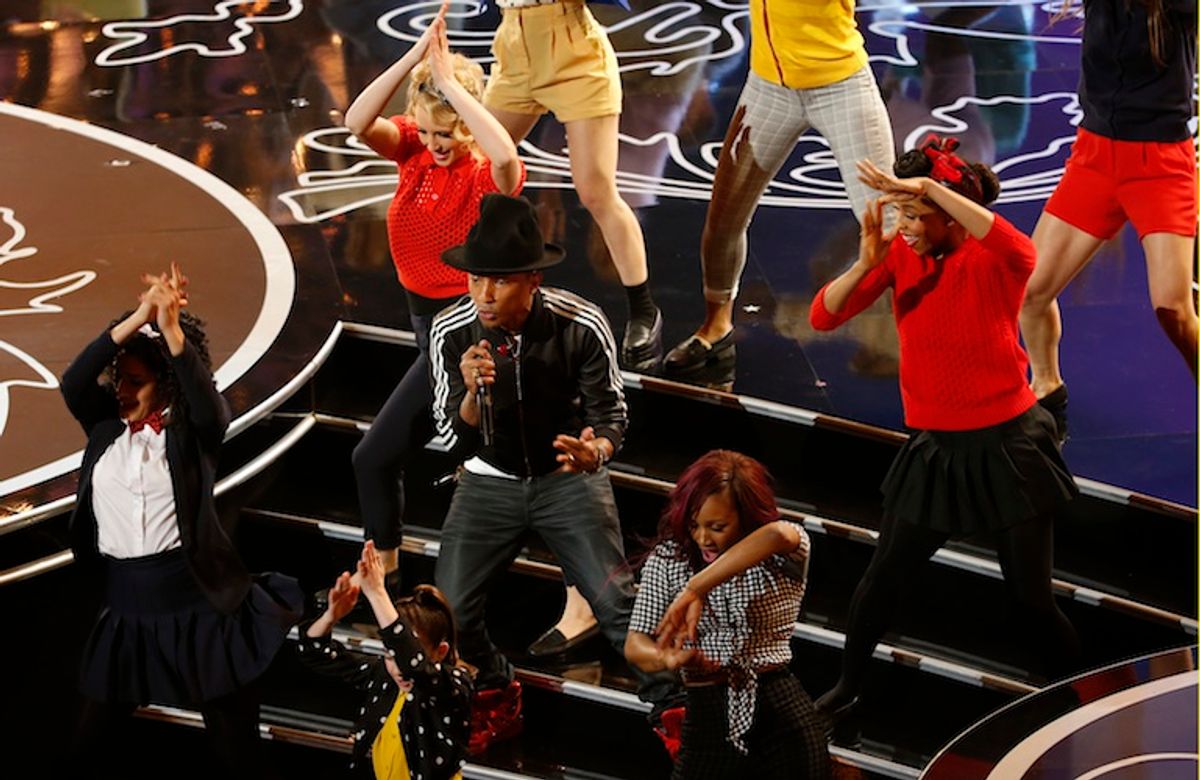 It wasn't an especially witty, innovative or even smooth Oscar night. There were teleprompter fails and missed cues and mispronunciations and so much schmaltz that we were treated to performances of both "Somewhere Over the Rainbow" and "Wind Beneath My Wings." There was a pizza delivery and a declaration that "We made history" by mass retweeting a selfie – a somewhat distorted view of what constitutes a historic event. Maybe ThinkProgress summed it up best when it declared this year's show and host Ellen DeGeneres' performance "inoffensive." But though the highlights punctuated long stretches of yawns in a remarkably tame evening, Oscar night still had its share of surprising, noteworthy moments. Here are our picks.

There was no big musical number, no clever clip montage. But after Seth MacFarlane's  tasteless "We Saw Your Boobs" fest last year, it wasn't such a bad thing to have the show go in a conspicuously less in-your-face direction. Sure, Ellen DeGeneres delivered jabs about the La La Land bubble, noting Hollywood's absolutely tragic recent few days of rain. But her teasings – like her reminders of Jennifer Lawrence's struggles with the forces of gravity -- were generally light and pleasantly show-bizzy. It wasn't the funniest hosting job in memory, but it wasn't a cavalcade of raging misogyny either. So, progress!

In his well-prepared but deeply heartfelt supporting actor acceptance speech for "Dallas Buyer's Club," the actor managed to gratefully and gracefully acknowledge a whole slew of frequently disenfranchised groups. Leto thanked his mother, a former "teenage girl who was pregnant with her second child." He gave a message "to all the dreamers in places like the Ukraine and Venezuela," saying, "We are here, and as you struggle to make your dreams happen, to live the impossible, we’re thinking of you tonight." And he remembered "the 36 million people who have lost the battle to AIDS and to those of you out there who have ever felt injustice because of who you are or who you love," declaring, "I stand here in front of the world with you and for you." Well done, Jordan Catalano. Well done.

Pharrell and his hat bring the crowd to its feet

Keeping to the show's kinder, gentler mood this year, Pharrell and his epic, auction-inspiring  headgear brought a squeaky clean, cardigan-heavy, and very Up With People vibe to the proceedings with a crowd-pleasing version of "Happy" from "Despicable Me 2." Enlisting an eager Lupita Nyong'o to join in the dancing was brilliant and seeing Amy Adams bust a move was grand, but it was Meryl Streep's shoulder shimmy that won the night.

Darlene Love has some crazy pipes

You thought Pharrell was happy? Onstage with the best documentary winners from "20 Feet From Stardom," the 72-year-old original girl group singer belted out that she was "haaaaappppppaaaaayyyy," killing it with a spontaneous, a cappella, and distinctly unautotuned version of "His Eye Is on the Sparrow." It was a showstopper – and a potent demonstration of what real singing sounds like.

Lupita Nyong'o wins at everything

The best supporting actress winner, style icon and all-around role model of awesomeness scored an unsolicited hug from Liza Minnelli before going on to deliver an emotional, exuberant acceptance speech, thanking her "12 Years a Slave" colleagues and her family, and tearily acknowledging that "This has been the joy of my life." Her triumphant, giddy walkoff, after telling the world that "No matter where you're from, your dreams are valid," was the feel-good tear-jerker moment of the night -- from a newcomer who happened to hit it out of the park on her very first film.

Presenting with Amy Adams for cinematography, Murray paused at the end of the list of nominees to add, "Oh, we forgot one: Harold Ramis, for 'Caddyshack,' 'Ghostbusters' and 'Groundhog Day.'"  It was an unexpected and generous acknowledgment of one of Murray's most famed collaborators – and a man he'd famously been estranged from.

John Travolta has no idea who Idina Menzel is

You'd be forgiven if you'd thought for a moment that some new artist you weren't cool enough to know yet was performing the nominated (and eventual winning) "Let It Go" from "Frozen." After a waxen Travolta, apparently paying homage to the film's title via his face and hair, introduced "the talented, one and only … Adele Dazeem," audiences were surprised to see none other than "Frozen's" Idina Menzel take the stage.  Travolta has allegedly battled dyslexia, but you'd think a veteran performer would at least have rehearsed enough to get the single name he had to pronounce right. Naturally, a Vine of Travolta's strange, slurry introduction went swiftly viral, and the "Tony Award-winning star of Wocked" immediately launched her own Twitter account. But what a missed opportunity that he didn't get to introduce the best director, because we'd have loved to have heard his way with "And the Oscar goes to Alfonso Cuarón."

In an evening that included a tribute to cinematic heroes that featured more nonhumans than women, it was cool seeing the best actress winner acknowledge the great work of her fellow nominees, and to dispel the idea that "Female films with women at the center are niche experiences. They are not. Audiences want to see them. In fact, they earn money." Bingo.

Winning best actor for "Dallas Buyer's Club," the eternally quirky McConaughey gave a speech that would have been entirely appropriate at a nude bongo drum circle. He movingly thanked his family, and then it got a little weird. He segued into a tale of how, at a young age, he decided that his hero was him, 10 years in the future – and that that future Matthew McConaughey is still the man he's chasing. And he ended, as he did at the Golden Globes, by invoking his "Dazed and Confused" character Wooderson's signature line: "All right all right all right." It didn't make much sense, but it sure was sweet.

An openly gay host. A supporting actress award for a Kenyan woman. A best director award for a Mexican man. A best picture award for "12 Years a Slave" 75 years after "Gone With the Wind" won the same prize -- and an acceptance speech for it "dedicated to those that endured slavery and the 21 million who suffer slavery today." It's nothing near equality in Hollywood's predominantly white male world. But hey, it's getting better.