Kim Novak and the curse of the beauty 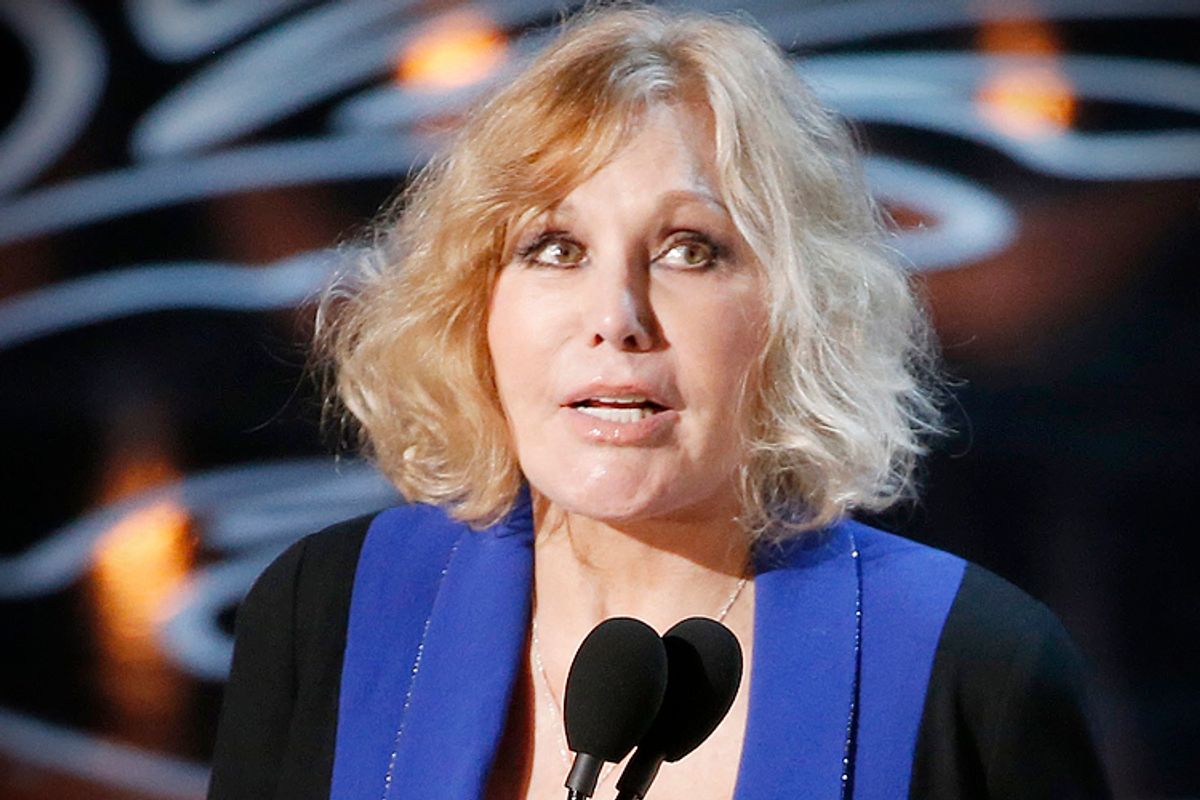 Whom the gods would destroy, they first make beautiful. Just look what they did to Kim Novak.

Until Sunday night, most of the world thought of Novak primarily as the siren of Hitchcock's iconic "Vertigo," a famously stunning actress whose career peak happened nearly 60 years ago. Then she showed up at the Oscars, presenting the award for best animated feature with an admiring Matthew McConaughey. Her hair was a shoulder length tumble of blond, but it was her face that was the most surprising for a woman of her 81 years. Her eyes seemed pulled back, her lips seemed strangely inflated and her skin seemed at once unnaturally taut and puffy. If you were on Twitter on the time, you could almost hear the collective gasp. Donald Trump – hardly one to comment on anybody else's personal appearance – tweeted that she should sue her plastic surgeon. Comic Nick Youssef later joked that she'd been "safely transported back to the Hollywood Wax Museum." Plenty of amateur critics chimed in with their own jibes about the seemingly "Frozen" star, prompting her defenders, like the folks at the Wire, to warn, "Know that we’re judging you if you’re making fun of Kim Novak right now."

Kim Novak, who in just the past few years has survived breast cancer,  bipolar disorder, fire and a serious horse riding accident, doesn’t have to justify her face or her private choices to anyone. She essentially left the Hollywood race years ago, and the snark of the Internet likely has little effect. But hers wasn't the only heavily scrutinized and shock-inducing countenance in an evening that began with host Ellen DeGeneres declaring youth "the most important thing in the world." There was 68-year-old Goldie Hawn's not-exactly-natural-looking appearance. There was DeGeneres' crack about 67-year-old Liza Minnelli looking like an "amazing Liza Minnelli impersonator." There was the entire train wreck known as John Travolta.

These were all people who could once command adulation, who graced magazine covers and bedroom walls. Now they're punch lines -- not so much because they've dared to get older but for the manner in which they seem to have chosen to do so. And it doesn't take any great detection skills to see trickled-down versions of those same factory-issued faces on several other leading actors and actresses – as well as newscasters and politicians -- decades younger than Kim Novak and company. There are entire generations of entertainers now walking around with peculiarly immobilized, sandblasted-looking cookie cutter countenances. In Hollywood's funhouse hall of mirrors, weird is the new normal.

The entertainment system is undeniably far crueler to women than men. Male stars like Clint Eastwood and Robert Redford and Harrison Ford, after all, still get to be exemplars of masculinity, while only Helen Mirren is allowed to be over 60 and remain a goddess. And the quest to keep young and beautiful can take some drastically misguided turns.

Yet the sad part is how unnecessary – even career-killing -- so much of this flat-out disfiguring is. In sharp contrast to the some of those profoundly appearance-altered presenters Oscar night, it was a field of considerably more natural-looking older actors – Bruce Dern, June Squibb, Meryl Streep and Judi Dench – who were among the actual nominees. And it was the still actively working 88-year-old Angela Lansbury and 68-year-old Steve Martin who picked up honorary Oscars. Why might that be so? Could it be because none of them, not even Streep, have ever been famed primarily for being beautiful?

Without the onus of being sex symbols upon them, they've been less fiercely scrutinized throughout their careers and likely less pressured to unnaturally maintain the gifts that by nature belong only briefly to the select few they're ever given to. Though 68-year-old Dolly Parton is untouchably awesome no matter what she does, it's still unnerving to see her become more mannequin-like with every public appearance. She says that "Anybody that’s got the nerve, desire and the money to have surgery, should find a good doctor and just do it," but based on what many aging Hollywood celebrities look like, "good doctors" must be in alarmingly short supply.

With a few notable exceptions – like Joan Rivers, who built an entire career of making fun of her own looks – the most extreme, downright troubling plastic surgery almost inevitably appears on the most once-gorgeous faces. Poor Mickey Rourke, for instance, has admitted, "I went to the wrong guy," and the results speak for themselves. It's sad, because there seems a whole lot to be said for letting go of that youthful beauty – like facial mobility, and career longevity. And though being desirable may be all you want when you're 20, trying to hang on to it can be a curse that lasts a lifetime.