Clueless law firm's out-of-touch boasting: "Got off with just a $5 million fine!”

Former bank prosecutor Lanny Breuer is back defending corporate clients. Wait 'til you see what his new job prizes 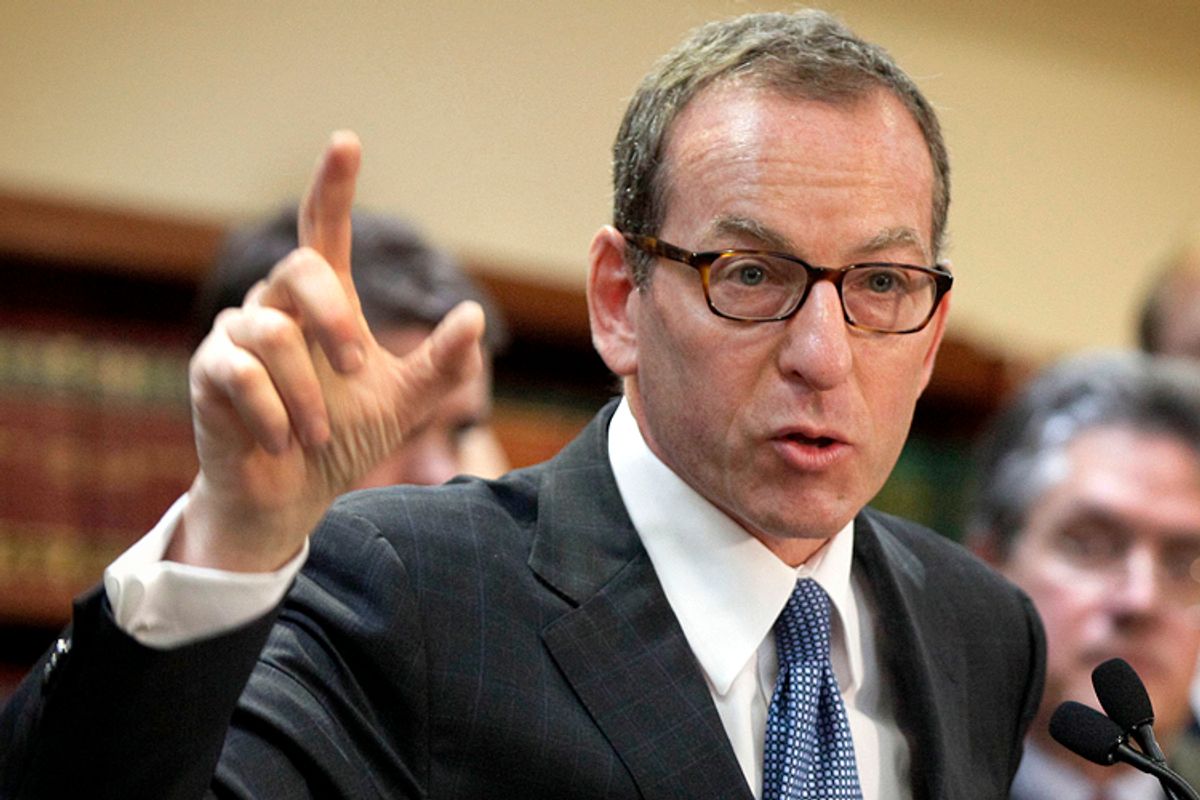 When Lanny Breuer left his position as head of the Justice Department’s criminal division to return to become vice chair at the law firm Covington & Burling, most observers saw it as evidence of the poisonous effect of the revolving door between Washington and Wall Street. After all, Covington (which also counts Attorney General Eric Holder as an alumnus) routinely defends the very white-collar clients Breuer was supposed to be pursuing with criminal charges in Washington. That potential for conflict of interest should be even clearer when you see how Covington & Burling promotes themselves to colleagues and potential clients.

Marketing materials sent out by the law firm highlight an article in the trade publication American Lawyer citing Covington & Burling as “Litigation Department of the Year.” You often cannot get a better read on a company than through how they present themselves in the industry trades, which are usually unseen by the public. And this cover story, proudly distributed by Covington & Burling as part of their own image boosting and available on their website, boasts, “Covington added muscle in all the right places to fight its way back into the top ranks of litigation firms this year.” A picture of Lanny Breuer is prominently displayed.

The article, entitled “Bigger and Better,” begins by noting that Covington increased staff at their litigation group by 40% over the past two years, particularly in the areas of “white-collar, product liability and antitrust.” The character witness given space to endorse Covington’s aggressive strategy in corporate trial defense is none other than John Lynch, the American general counsel for BP, a client of Covington’s in the Gulf oil spill case. In this hidden world, having BP talk up your prowess is seen as a positive.

In recent years, Covington has worked on various pieces of litigation for the biggest banks on Wall Street, including JPMorgan Chase, Wells Fargo, Citigroup and Bank of America. Under “Litigation Highlights,” American Lawyer profiles Covington’s work representing Michael Perry, the former CEO of IndyMac. Perry presided over the second-largest bank failure in history during his tenure. The Federal Deposit Insurance Corporation (FDIC) sued him for continuing to generate subprime loans even after the housing bubble collapsed, which could not be resold and led to $600 million in losses on IndyMac’s balance sheet. The Securities and Exchange Commission (SEC) also charged Perry with failing to disclose the financial problems at IndyMac to investors.

“Everyone wanted to make him the poster child for the financial crisis,” remarks D. Jean Veta of Covington’s financial institutions group for the article. But Veta, a Deputy Associate Attorney General during President Clinton’s second term, would not be denied. In the end, she reduced Perry’s personal exposure for the IndyMac debacle to a $1 million settlement with the FDIC and a mere $80,000 to the SEC. “I would have been in bad shape but for my tremendous counsel at Covington,” Perry exults. Breuer still worked at the Justice Department when Covington resolved the IndyMac case. His agency never brought charges against Perry.

American Lawyer goes on to tout more of Covington’s successes in helping bankers escape justice “with very little damage.” NYSE Euronext “got off with just a $5 million fine” from the SEC, “over allegations that it released market data to some clients faster than others.” And ex-Charles Schwab executive Kimon Daifotis “was fined just $75,000 for allegedly misleading investors about Schwab’s subprime exposure.” Covington set policy along the way, with litigator Tammy Albarran feted for setting the precedent that “the Dodd-Frank Act does not apply retroactively.”

It’s notable that Breuer is featured in this story, considering that he vowed not to represent companies on any litigation under his purview at the Justice Department during his tenure. Yet here, in an article specifically targeting Covington & Burling’s expertise in defending Wall Street from fraud allegations, Breuer is shown as part of the team. (Breuer did acknowledge when joining the firm that he would allow himself to counsel clients on any new Justice Department enforcement from behind the scenes.)

Breuer even gives a quote for the story, about the fact that Covington & Burling’s “regulatory expertise” gives them a leg up on their competitor law firms. “Marrying regulatory expertise with white-collar lawyers is an extraordinary advantage,” says Breuer, who gained that expertise from working for the Justice Department and now uses those skills to fight regulatory scrutiny for his bank clients. Other bigwigs at the firm include Robert Long, a former Assistant to the Solicitor General, and John Dugan, the former U.S. Comptroller of the Currency, the agency that regulates national banks. The American Lawyer story literally says that such expertise helps Covington & Burling’s clients “get the best deal that they can.”

Covington’s success extends beyond Wall Street. The article celebrates their protection of pharmaceutical companies GlaxoSmithKline, Johnson & Johnson and Eli Lilly. Covington also represented Occidental Petroleum in securing a $2.3 billion “investor-state award” against the nation of Ecuador, effectively overturning the judgment of the country’s attorney general by invoking a bilateral NAFTA-style trade agreement demanding “fair and equitable treatment” for corporations. The very feature of trade agreements that has appalled activists fighting the Trans-Pacific Partnership, that these deals hand over national sovereignty to multinational conglomerates, becomes a selling point for Covington & Burling.

The article probably published too late to tout a more recent success by Covington. They filed suit late last year against the Federal Reserve on behalf of the American Bankers Association (ABA), seeking the tossing of a provision of the Volcker rule, meant to prevent commercial banks from trading risky securities for their own profit. The lawsuit intended to stop legitimate accounting practices from forcing mid-sized banks from taking losses on certain collateralized debt obligations (CDOs) that will likely never regain their value. Caving to these demands, the Fed changed the regulation, allowing banks to continue to hide these CDO losses on the books. It’s not surprising that Covington & Burling picked up business from the ABA; one of their partners, Edward Yingling, was President and CEO of the trade group for 26 years.

Continued mismanagement and fraud by banks around the globe ensures a steady stream of business to Covington & Burling in white-collar defense. And as they proudly brag, they’re experts at knowing how to keep their clients out of jail with no damage greater than a petty fine, experience gained from a lifetime on both sides of the negotiating table between regulators and Wall Street banks. The value of corporate law firms hiring from inside government comes from their personal knowledge of the rules and how to get around them, and their relationships with their friends who remain at the various agencies. Ex-regulators like Lanny Breuer can make millions defending the clients they used to regulate, as long as they play ball while in government and prove their future worth. And with few exceptions, it’s all perfectly legal. We just don’t usually get to see the scheme displayed so obviously and transparently as it is in these marketing materials.