Black girls' zero-sum struggle: Why we lose when black boys dominate the discourse 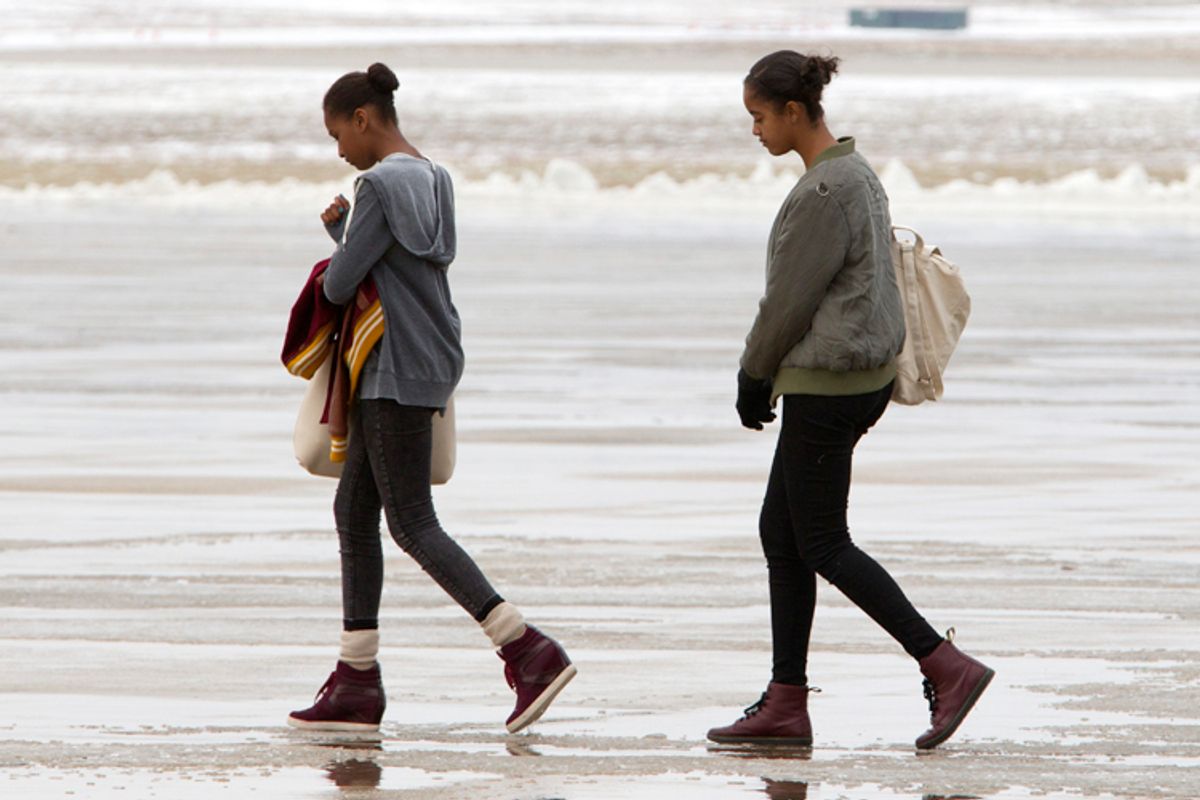 Like many African-American men, the president has bought into the narrative about the problems of absentee black fathers and about the potential danger and destructiveness of fatherless black sons. Donning the role of father-in-chief for back people last week, the president announced his new My Brother's Keeper initiative, designed to address and ameliorate issues of low achievement and lack of mentoring for young black and brown men.

I am ambivalent about My Brother’s Keeper. Yes, by almost every social measure, African-American men, and boys in particular, fall behind at alarming rates. They are suspended from school the most, incarcerated the most, have the highest rates of unemployment, commit disproportionate amounts of violent crime, and have some of the lowest high school and college graduation rates. Frequently their encounters with law enforcement and white male authority figures end with black men dead.

These are alarming times. Times that would make Ida B. Wells weep. Over these many months, as I have watched the failure to convict both Trayvon Martin’s and Jordan Davis’ killers, I have worried. Worried because I know that when African-American boys are being killed with impunity by white people this triggers every kind of deeply held race trauma that African-Americans have. We circle the wagons. We fight fiercely to protect our beloved boys. We demand their right to grow into men. And we should.

The thing is: This “we” is mostly African-American women – doing the fighting, the organizing, the praying, the rearing, the fussing, the protecting, the loving. And the losing.  Black women have been their brothers’ biggest and best keepers.

But when black men occupy space at the center of the discourse, black women lose critical ground. I wish these struggles did not feel like zero sum struggles. I wish that black men — Barack Obama included -- had the kind of social analysis that saw our struggles as deeply intertwined.

According to the African American Policy Forum, black girls are suspended at a higher rate than all other girls and white and Latino boys. Sixty-seven percent of black girls reported feelings of sadness or hopelessness for more than two weeks straight compared to 31 percent of white girls and 40 percent of Latinas. Single black women have the lowest net wealth of any group, with research showing a median wealth of $100. Single black men by contrast have an average net wealth of $7,900 and single white women have an average net wealth of $41,500. Fifty-five percent of black women (and black men) have never been married, compared to 34 percent for white women.

This situation is dire at every level. But perhaps the most troubling thing of all: The report indicates that while over 100 million philanthropic dollars have been spent in the last decade creating mentoring and educational initiatives for black and brown boys, less than a million dollars has been given to the study of black and brown girls!

Several years ago, in line with the rise of the field of Girls Studies in academe, a group of students asked me to teach a course on Black Girls Studies. The number of books and scholarly articles barely added up to enough for a full course syllabus.

No mass movements to address the social plight of African-American women will ever happen because there is not enough collective knowledge about us to be alarmed. And in fact, this failure to study and ascertain the actual social condition of black women is a centuries-old problem.

In 1893, Fannie Barrier Williams lamented before the Chicago World’s Fair: “Less is known of our women than of any other class of Americans.” There were “no organizations of far-reaching influence for their special advancement, no conventions of women to take note of their progress, and no special literature reciting the incidents, the events, and all things interesting and instructive concerning them.” Moreover, “separate facts and figures relative to colored women are not easily obtainable,” she told the crowd.

In her introduction to her 1970 collection of essays "The Black Woman," Toni Cade Bambara sounded a similar note when she wrote that as black women searched various fields in order to determine what liberation for black women might entail, “we note, all too quickly, the lack of relevant material.”

Here we are again.

Black women remain caught between the Scylla and Charybdis of hyperinvisibility and invisibility. Everyone thinks that they know everything there is to know about us, but based on facts alone, very little is actually known. And what we don’t know can hurt us – is hurting us. What we fail to acknowledge is that images of black and brown women drive a startlingly large amount of social policy. Disdain toward supposedly irresponsible black and brown women – welfare queens as those on the right derisively call them – is at the heart of the right’s continued unfeeling push toward austerity. This same disdain toward disproportionately black and brown female wage laborers undoubtedly informs the national resistance to raising the minimum wage. Images of “dastardly” brown women crossing our borders illegally in order to drop anchor babies drives immigration policy.

And the exceptionalism of Michelle Obama and her daughters frankly doesn't help matters. Black women themselves become complicit in this pushing of ourselves to the background, marshaled there by our mythic belief in our own strength, our unresolved traumas over fathers who failed to meet expectations, our self-sacrificial love for black men, and our deep desires to respectably conform to the American nuclear ideal. Michelle Obama makes many black women long for this return to tradition.

There are no easy answers here. Black and brown men’s needs and lives matter. And I’m glad we have a president sensitive to those needs. But as Mychal Denzel Smith argued, “The path to equality for Black and Brown people [cannot be] to uphold patriarchy.” And as Dani McClain argues, it seems that women and girls simply have no place in this new set of initiatives.  Beyond the problems of using personal responsibility and philanthropy as models to solve a deeply systemic set of social problems, the failure to imagine the struggles of men and women of color as linked together is perhaps the most short-sighted aspect of the My Brother’s Keeper initiative.

For there is no saving black and brown men without the labor and love of black and brown women. Yet surely, we have come far enough to imagine liberation strategies that don’t require men of color to tread over “this bridge call our backs.” While we, women of color, are doing the heavy lifting to keep our communities functional and intact, the question remains, “Who will lift us?” Who will fight for us?