“There will be another attack”: Rand Paul ally takes heat over Snowden at CPAC

"All the NSA has to do is watch all the calls made from CPAC, and the IRS would have their audit schedules" 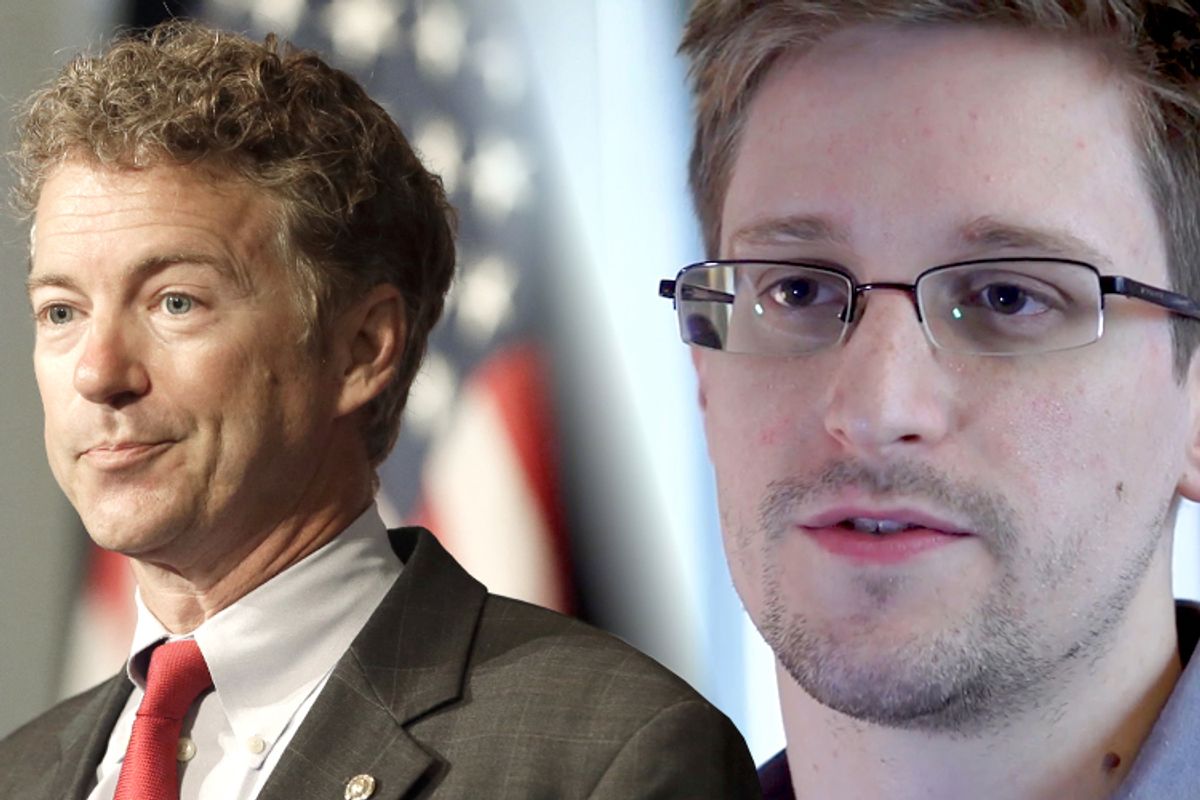 An ex-governor and an attorney behind Rand Paul’s NSA lawsuit clashed passionately and sometimes personally on a CPAC main stage panel devoted to privacy and national security.

“Edward Snowden is a traitor and a coward” who chose to “flee … in order to make common cause with a Stalinist thug,” and “substantially weakened this country against the direct enemies of this country,” charged former congressman and Virginia Gov. Jim Gilmore.

“In a democracy, the people have the right to know what their government is doing, because we get to decide what their policy is going to be,” countered Reagan administration attorney Bruce Fein, who helped draft Paul’s lawsuit. Fein argued that Snowden’s “courage” had put U.S. senators – who have greater constitutional protections to disclose information – to shame. He accused Gilmore of ignoring “the more rampant lawlessness” of the U.S. government.

Both Gilmore and Fein drew cheers from the ballroom’s crowd, though Fein’s stance appeared to have more supporters. Asked by moderator John Solomon of the Washington Times whether they believed the programs revealed by Edward Snowden were making them safer, only about a dozen raised their hands – prompting Solomon to ask Fein whether he needed Dick Cheney to come back and set the crowd straight. Gilmore’s claim that “I understand better than anybody what the Fourth Amendment really means” drew a loud, “You lie!” from at least one attendee.

Gilmore repeatedly referenced his experience serving as Virginia’s governor during the 9/11 attacks, and warned the crowd, “I have to tell you that there will be another attack on the United States. There simply will be.”

Fein charged that “Governor Gilmore does not understand” that the “greatest national asset” is “loyalty of the American people.” Gilmore shot back that that was “nonsense demagoguery.” Fein asked Gilmore why the NSA should be collecting data on everyone’s communications, including Gilmore’s; Gilmore responded, “Because they want to be in a position to understand who the bad guys are talking to.”

Such exchanges overshadowed Gilmore and Fein’s fellow panelist, 21-year-old TurningPoint USA director Charlie Kirk. Asked about Snowden, Kirk told the crowd his generation was less concerned with assessing the man’s character than with what the information he’d revealed suggested about surveillance of platforms from email to Snapchat. Kirk repeatedly tied the NSA question to right-wing causes célèbres, arguing that conservatives should be wary of rhetoric about “enemies” and “bad guys,” because “We as conservatives are viewed as bad guys right now … All the NSA has to do is watch all the calls made from CPAC, and the IRS would have their audit schedules for the next four years.”

Kirk argued that conservatives seeking to engage young people – a frequent theme of this year’s confab – should see an “absolute opportunity” in taking on surveillance, and that Obamacare left the president with no authority on privacy issues. “He’s saying, ‘I’m going to rein in all the NSA,’” charged Kirk, and “‘by the way, go to a website, give me all your information.’”