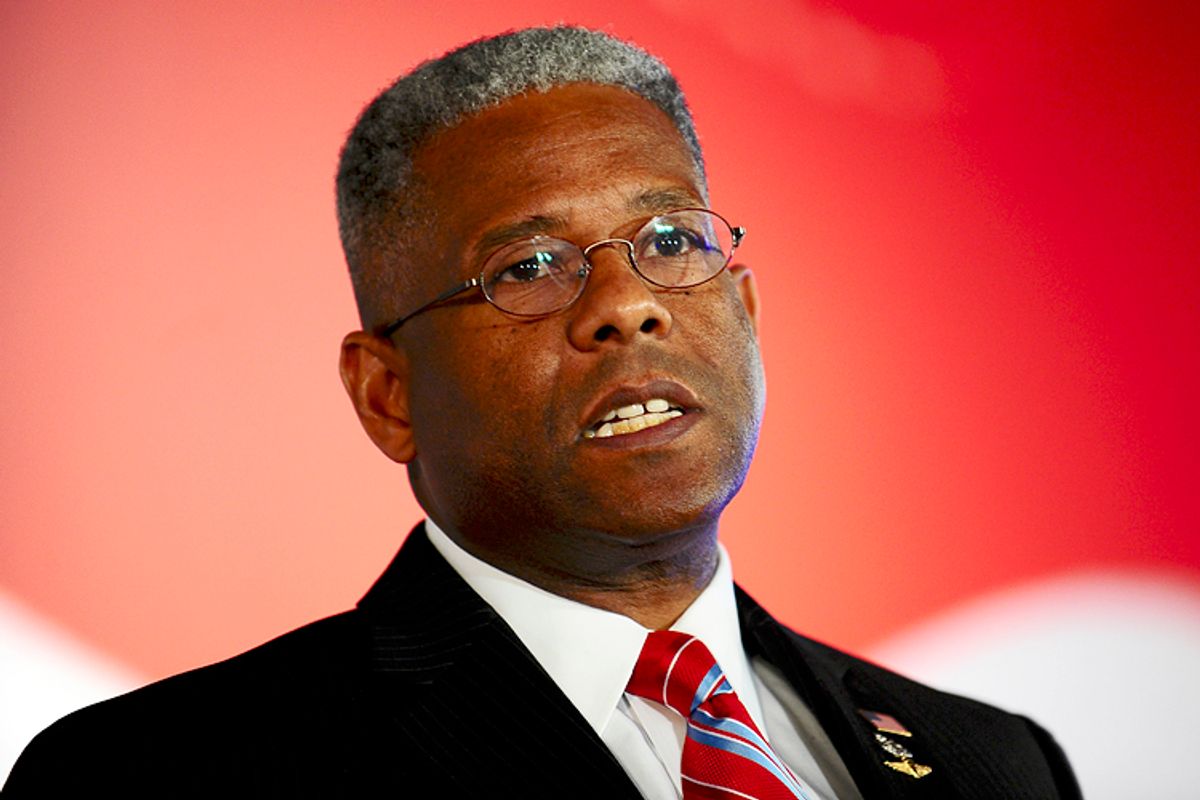 Former Congressman Allen West told Salon he expects the “kind of incursion” underway in the Ukraine in “every country where you see ethnic Russians,” and compared Vladimir Putin’s actions to a 1938 invasion by Adolph Hitler: “If you’re a student of history, you can understand this is exact same thing that someone said in the 1930s, when they went into the Sudetenland – and then, next you know, Czechoslovakia was overrun.”

West spoke with Salon after delivering a fiery address at an “Honoring America’s Military Heroes” reception organized by Citizens United. Calling Barack Obama a “faux commander-in-chief” and Chuck Hagel his “secretary of appeasement and compromise and surrender,” West linked U.S. military cuts to Russian actions in Ukraine, saying that after Hagel “talked about decimating our military capability, it was only three or four days later that Vladimir Putin went into the Crimea.” West underscored his implication with a series of historical examples, telling the packed conference room that “After World War I we decimated our military forces,” and “the Japanese saw an opportunity and they attacked us at Pearl Harbor.”

The ex-congressman also accused Obama of forcing liberalism within the U.S. military, saying the president “believes that the vital national security interest of the United States of America is lifting ‘Don’t Ask, Don’t Tell.’” He warned, “We have people that believe that social egalitarianism is such an important thing, that they are going to say that women should be in the Special Forces and the Rangers,” and “we have a president that believes that the most important thing for the United States military is to have beards, turbans, and hijabs” in the ranks – a statement which drew applause and audible angst from the crowd.

West implied to the veteran-heavy crowd that he may have been snubbed by CPAC, saying that someone had asked him why he wasn't appearing on CPAC's mainstage, but that he'd just met a World War II vet at the event (sponsored by Citizens United, not CPAC), and "Standing here speaking before a man that’s a member of the greatest generation is far more important than standing in that ballroom." After decrying the decline in the number of veterans in office – the focus of an organization he founded after losing his congressional seat in 2012 – West closed by asking the crowd, “Are we truly a great nation when we basically say to the rest of the world that we surrender?” West warned that Putin was “laughing” at the U.S., and told those assembled that it was up to conservatives to “wipe that smile off of his face.”

Asked after the speech what that would consist of, West told Salon “I think one of the most important things is seeking how you expand NATO.” Asked about his comments on women entering the Special Forces, West said that “the problem” was the prospect that “someone should unilaterally make that decision, without the people that are there in the military really advising them about that.” As for whether “Don’t Ask, Don’t Tell” should be brought back, West told Salon, “You need to sit down and you need to talk to the middle level leadership, because they’re the ones responsible for a lot of things that happen in the barracks, and what-have-you…But it’s all about our military readiness.”

West agreed to resign from the military in 2004, after an incident in which, he had his soldiers put an Iraqi’s head in a sand-filled barrel and, the New York Times reported, “At the end of his count, Colonel West fired a shot into the barrel, angling his gun away from the Iraqi’s head, he testified.”

The ex-congressman was introduced at Friday’s event by Citizens United President David Bossie, who called him “a distinguished leader, a war hero, and a renowned conservative warrior.” Bossie added, “We need Colonel West to think about running for office again.”