The conservative rainmaker lets the cat out of the bag

There was little from last week’s CPAC that should have surprised America. We get it, conservatives. You want the poor to “keep their knees together.” You want a 1950s-era Berlin-styled wall along the U.S.-Mexican border. You believe gays, atheists, immigrants, liberals, and whatever else isn’t white and straight is destroying the country.

None of this comes as a surprise to anyone who has watched five minutes of Fox & Friends.

What did come as a surprise, however, is the right wing let the metaphorical cat out of the bag when it comes to their strategy of transforming America’s democracy for the many into a tyrannical plutocracy for the very few, revealing just how disingenuous the Republican Party is whenever it offers any lip service to dealing with income inequality.

On Saturday, anti-tax crusader Grover Norquist moderated a panel titled, “After Wisconsin and beyond right-to-work laws, what’s possible now to free workers and students from unionism?” While acknowledging that union membership has fallen to a historic low, Norquist opened the discussion by claiming that unions are the greatest political force in America at the moment.

"They're not dead yet — they're in decline," Norquist said. "They raise maybe $7 billion a year in dues. Imagine how much they spend of that on politics. They are the largest political player in American politics and will be for some time. What can we do about it?"

Right there is the cat, jumping out of the bag!

When Wisconsin governor Scott Walker ran for office in 2010, his campaign message mirrored the RNC’s message: that the economic downturn had nothing to with Wall Street gone wild, and everything to do with union labor and local budget debts and deficits. In other words, on one side you have the right-wing billionaires like the Koch brothers; on the other side you have teachers, cops, administrative workers, and janitors. Walker’s goal was to reduce public-sector unions to the same subjugated state as their counterparts in the private sector. Since signing the bill into law, union membership has fallen nearly 40 percent in his state.

Last year, Rachel Maddow aired a piece on how she believed the Republican blueprint for destroying organized labor has nothing to do with balancing budgets, and everything to do with controlling political power for their right-wing billionaire ideologues.

"The longer it goes on, the clearer it becomes that this whole fight is not about what they say it is about. This whole fight is not about the budget. This fight is about destroying the unions. It is about corporate titans who give lots of money to Republicans and who can get them on the phone for 20 minutes in the middle of a crisis, guys like David Koch wanting to bust the unions, and it is about dismantling a key part of the Democratic base in terms of fund raising. You want to see those numbers from the 2010 elections again? Right. Okay, unions are the only significant outside spending group that Democrats have to compete with the conservatives. Union members also tend to support Democratic causes and they provide a good chunk of the get out the vote infrastructure that Democrats rely on to win elections. The Republican Party more than almost anything else represents corporate interest. The Democratic Party more than anything else represents people who work for corporate interests or people who represent something other than corporations."

To underscore her point, of the top 10 “outside group” electoral campaign spenders in America today, seven are right-wing groups, including the Koch brother’s Americans for Prosperity, Karl Rove’s Crossroads and the Chamber of Commerce. Each of the three left-leaning groups are labor unions, including the Public Employee Union, and the SEIU. Remembering it’s a 7:3 power imbalance, if the billionaire-backed Republican Party can completely destroy the unions, then there will be no progressive or left-leaning group among the top 10 political spenders in this country.

This week, a Republic Report revealed that during the 2012 election, the Koch brothers and their groups alone spent more than double the combined political spending for the top 10 unions combined. The  chart includes union spending on dark money Democratic groups and Koch spending on dark money groups like Americans for Prosperity. See below: 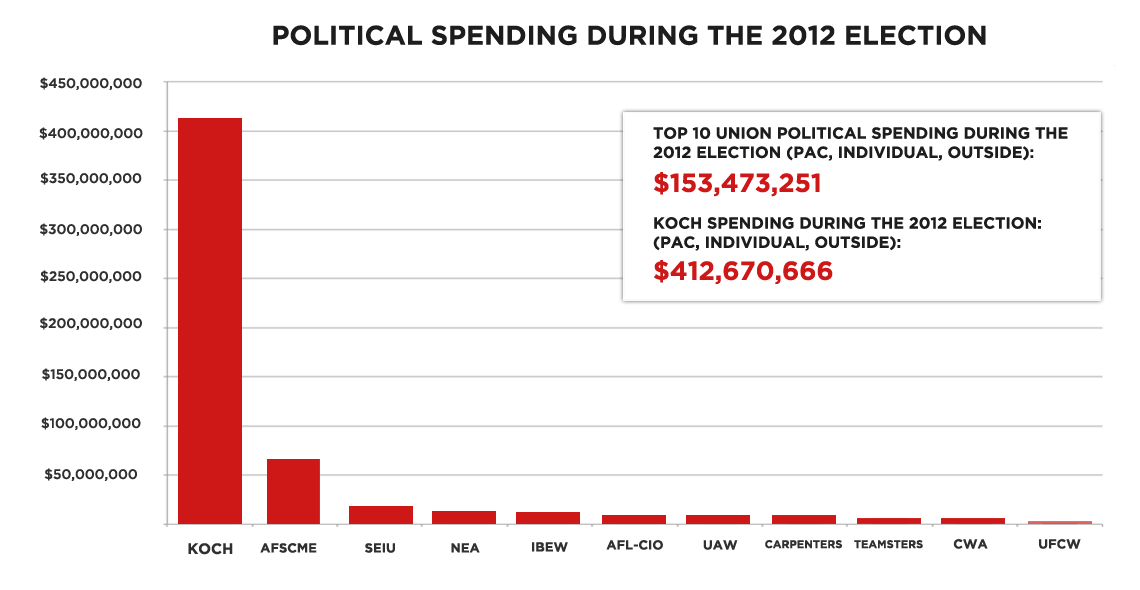 Senate Majority Leader Harry Reid (D-NV) has been waging a one-man crusade against the Koch brothers. Last week he said, “The oil baron Koch brothers are very good at protecting and growing their prodigious future and fortune. There’s nothing un-American about that. But what is un-American is when shadowy billionaires pour unlimited money into our democracy to rig the system to benefit themselves and the wealthiest one percent.”

Since the moment Ronald Reagan declared war on the unions in the summer of 1981, when he fired 13,000 striking air traffic controllers and effectively destroyed their union, private sector union membership has fallen from 35 percent to 7 percent. Today there is simply no countervailing power to plutocrats and oligarchs like the Koch brothers.

Hedrick Smith, author of Who Stole the American Dream?, writes, “These trends have left not only union members, but the middle class in general without a voice with sufficient clout to negotiate for moderate, gradual adjustments to technology and globalization rather than instant slashing by Corporate America.”

The Right’s now openly political strategy to destroy organized labor means Republicans can contribute in no meaningful way to any real discussion as it relates to the scourge of income inequality. Especially when economists have tied the decline of middle-class income with the decline of union membership. In the 1970s, the minimum wage was about 46 percent of the average wage. Today, without any legally fixed ratio between the minimum wage and average wages, the federal minimum wage represents only 31 percent of the average hourly wage.

With the Koch brothers alone spending almost three times the combined political spending of the 10 biggest labor unions, the minimum wage worker simply has no political representation, and thus raising the federal minimum wage has little chance of succeeding while the party for the rich controls at least one of the three branches of government. That’s just the way Grover Norquist wants it.