GOP assaults the Constitution: Why they don't really care about free speech

Remember their love of liberty and freedom? Now they want to curtail protests and shut down workers' free speech 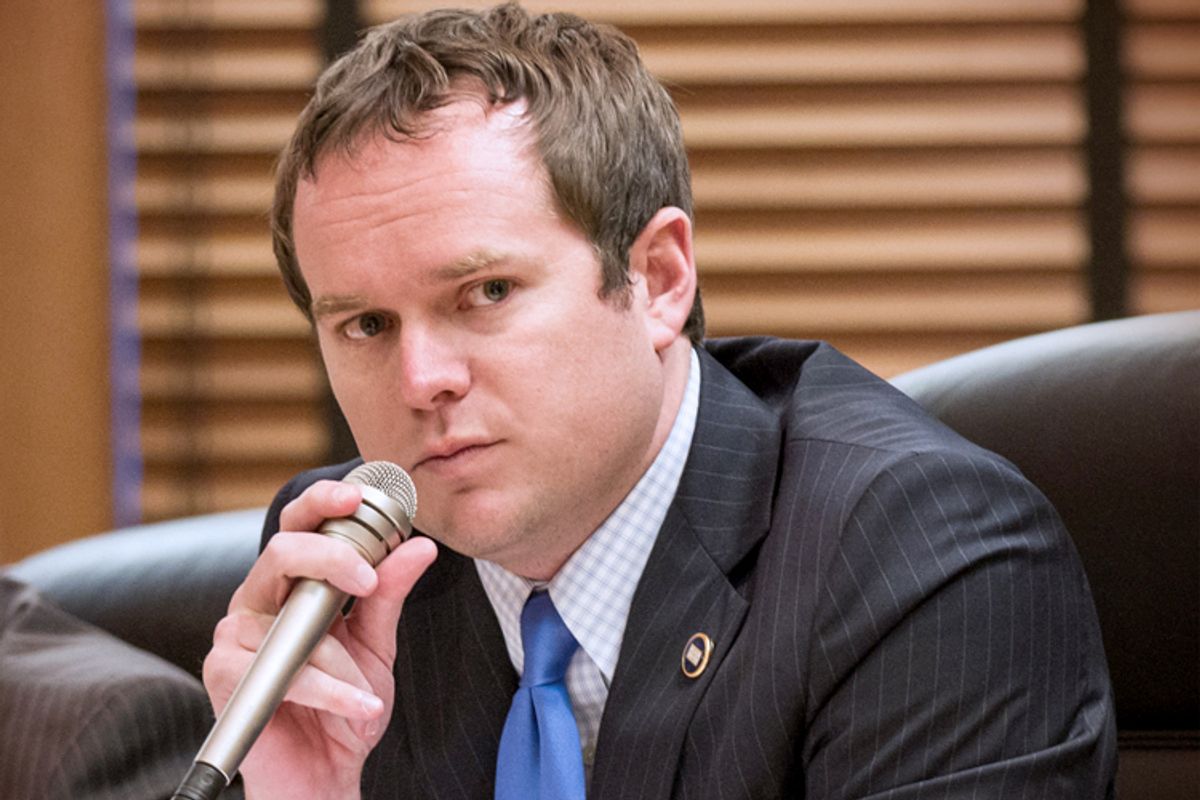 In moves that pro-labor legal scholars warn may violate the U.S. Constitution, Mississippi, Michigan and Tennessee Republicans have introduced bills that would strengthen the hands of bosses faced with protesting employees.

“The language is so broad, the potential is so destructive, that what they’re basically doing is outlawing strikes …” University of Texas labor law professor Julius Getman told Salon. “Or they’re doing their best to limit strikes or picketing to situations where you have two or three people standing still. The idea of the union manifesting concerted power of workers is something that they’re seeking to prohibit.”

“People have a right to free speech, but they don't have a right to keep someone from going to work,” countered state Rep. Jeremy Durham, who introduced that state’s anti-picketing bill.

All three state bills would lower the bar for businesses to seek and secure judicial injunctions against labor picketing – a form of protest long used by workers seeking to dissuade customers or strikebreakers, attract reporters or supporters, and spotlight alleged abuses. In addition to changing injunction rules, the proposal in Mississippi's House would ban picketing that “has or intends the effect of violence or intimidation, near or contiguous to the business’ customers”; Tennessee’s would ban picketing that is “preventing the pursuit of any lawful work or employment by means of disturbance or nuisance.”

At a private home (say, a CEO’s mansion), Mississippi’s and Tennessee’s bills would make disrupting “the resident’s right to quiet enjoyment” grounds for convicting picketers of a crime. The bill in Michigan's House would remove current language making certain picketing a misdemeanor, but add language imposing a $1,000 a day fine for a person (including an individual protesting worker, not just an organization or a union official) repeatedly found to have picketed illegally. And the bill passed by Mississippi's Senate would allow an individual picketer to be thrown in jail for six months.

“It means that almost any significant picket line, the workers are running a risk,” argued Getman: Along with the inherent risks of defying your boss, “there’s the possibility that somebody will say this is ‘mass picketing,’ and you will be subject to fine and imprisonment.” Asked last week whether his bill could scare workers out of participating in legal protests, Michigan state Rep. Tom McMillin noted that fines wouldn’t come until a second offense, and told Salon, “As long as they don’t do anything illegal, they’ll be fine.”

“There is an enormous problem with federal preemption here,” argued Indiana University labor law professor Kenneth Dau-Schmidt. Getman called the laws “absolutely inconsistent” with the National Labor Relations Act. “They’re saying, ‘We can prevent you from acting in concert,’” said Getman, “‘[even] where this no suggestion of violence or illegality, because we think you shouldn’t be doing this.'”

Getman noted that unions acting are already subject to free speech limits unlike those facing other picketers, including the Westboro Baptist Church’s “God Hates Fags” pickets at military funerals. Indeed, some conservatives have begun agitating to bring non-union workers’ groups like the ones behind Wal-Mart strikes under the legal regime applied to unions; a report released last month by the Chamber of Commerce noted that some such groups “engage in conduct, including protests, secondary boycotts and other picketing activities, that would be considered unlawful under the National Labor Relations Act (NLRA) if done by traditional unions.” Still, among a raft of other anti-union proposals, Republicans have pushed further limits on union protests; as Salon has reported, those efforts included a Georgia anti-picketing bill defeated in 2012 after top Tea Party activists joined unions in opposing it as a threat to free speech.

In Mississippi, the Clarion-Ledger reported that bill sponsor Sen. John Polk acknowledged under questioning “that he didn’t know of any instance in Mississippi where an employer has been intimidated,” but said the bill was “to close the gate before the horses get out.” (Polk did not respond to an inquiry from Salon.) In Tennessee, where state Republicans made news by suggesting they could withhold tax breaks if Volkswagen workers voted union, the Tennessean reported that Rep. Durham cited an increase in the state’s union ranks as evidence that “if that’s such a growing part of our economy, we need to take preemptive measures to make sure our businesses have the rights and protections they should be entitled to.”

“There’s no justification for violence, but that could currently be enjoined under federal law,” countered Dau-Schmidt, as could blocking entrances or exits. Dau-Schmidt accused Republicans of chasing a “non-issue,” noting that compared to decades past, “There’s almost no strikes in the country at all.” Rather, he argued, “Organized labor is so weak now, and the Republicans are so strong in those states, they’re seeing their opportunity to do in a likely political opponent … And I think it will really do in our democracy if they’re successful.”

Getman and Dau-Schmidt both suggested the GOP proposals harkened back to an era before the federal Norris-Laguardia Act, the 1932 law which restricted judges’ authority to shut down workers’ protests. The proposed standards (“nuisance”; “intimidation”; “quiet enjoyment”) “are very vague,” argued Getman, “so it gives enormous power to individual judges to prevent picketing and to penalize individuals.” He added, “This is what was the law from the 1890s … and it worked horribly.”

“The way it used to work would be the employers would hire Pinkertons [private security] to go in and rough up the strikers,” said Dau-Schmidt. “And then they would go to court and say, ‘See, there’s violence.’ And then the court would enjoin it. And then they would throw the union leaders in jail.”

Asked about such concerns over making it easier for companies to get injunctions, Rep. McMillin told Salon, “As long as somebody’s not doing anything illegal, I don’t think there’ll be a problem.” As for the constitutionality of his bill, he said, “Nobody had problems with the current statute, and we’re not making anything additionally illegal.” Reached over email, Tennessee Rep. Durham said his bill "is on the books in other states and none of those laws has been struck down by a judge. This isn't even regulating the content of speech - it's regulating conduct that deprives other citizens of their rights." Durham did not respond to a follow-up inquiry last week regarding which state legislation he was referencing, and how judges' should interpret the terms "quiet enjoyment" and "disturbance or nuisance ..."

Asked if he was aware of any examples of illegal picketing in which business owners had been unable to put a halt to the protests or secure an injunction, Rep. McMillin told Salon, “It has occurred in areas around the nation”; he said there had been cases in Michigan where protesters returned to a site after being dispersed by police. Asked if he could share examples, the bill’s sponsor said, “Not right now, no. But … if it’s not an issue, then there must not be a problem with the bill.”

Asked if he had spoken with any Michigan business owners who had sought injunctions against picketing and been denied, McMillin answered, “Injunctions? No. I just think this makes a lot of sense.” Then he added, “What do you want me to say, that is the gotcha line that you want to print? Just tell me what it is, and maybe I’ll say it.”