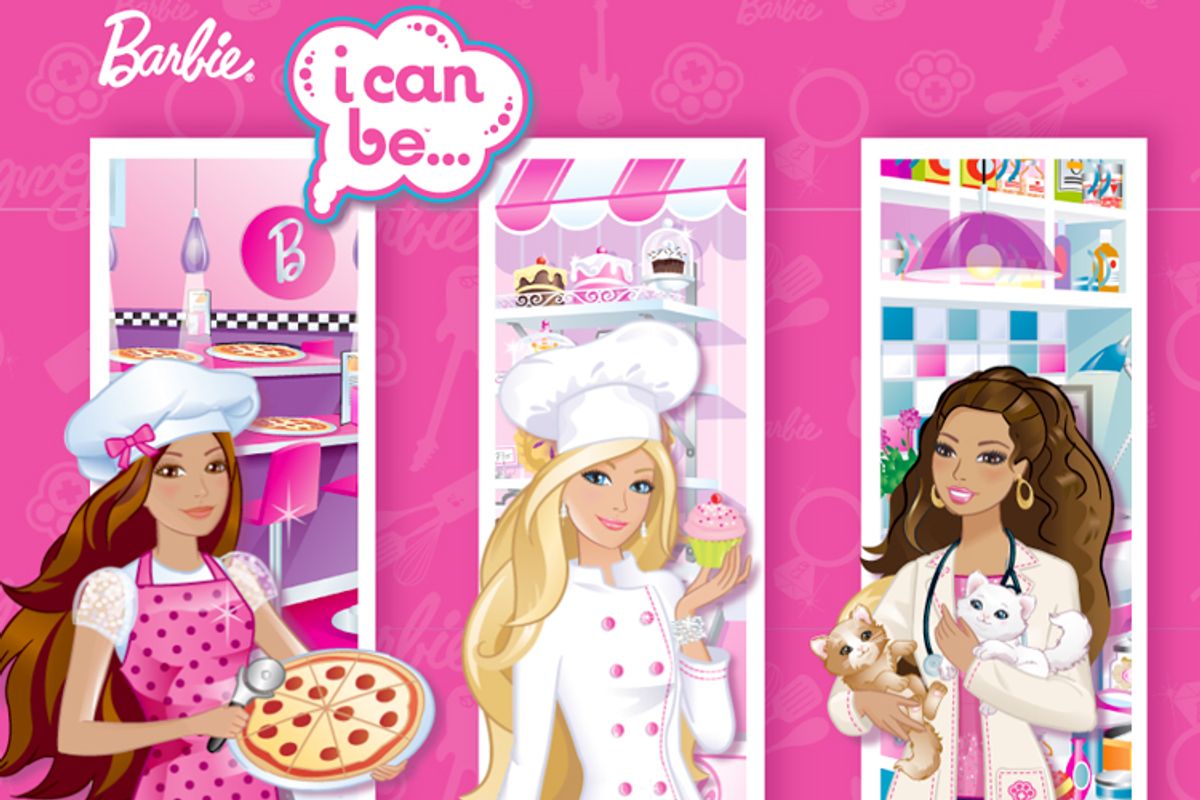 Oh, my little green friends. Can't we just go back to distributing cookies and earning Try It badges and giving conservatives useless fights to get all worked up about? Now you're somehow trying to turn into a weird hybrid of Sheryl Sandberg and Barbie. To quote "SNL's" favorite teenage girl talk show: What are you even doing?

Most contentiously, the organization has recently teamed up with Mattel for its first ever corporate-sponsored patch. The "Be Anything, Do Everything" participation patch from the recent Sports Illustrated supermodel promises "to inspire the next generation of female leaders by encouraging girls to explore career possibilities through exciting new program activities." There's also an "I Can Be…" booklet, and an online game in which Barbie (or her marginally more ethnic looking counterparts Teresa or Nikki) romps through a variety of career choices including architect, racecar driver, movie star, astronaut or president. The object lesson seems to be that a girl can be anything – as long as she's wearing pink while she's doing it.

Unshockingly, some parents and advocacy groups have taken umbrage with the notion of the world's most famous plastic woman barging in to Girl Scouts terrain. Both the Campaign for a Commercial-Free Childhood and the Center for a New American Dream are now urging the organization to end its relationship with Mattel.

The Barbie promotion is aimed at Scouts in the Daisies and Brownies range, so my own 10-year-old Junior isn't the target audience for it. But I was heartened this week when our troop parent sent out an alert to the girls and their families, urging them to tell the Girl Scouts that the partnership does not align with our own vision of an organization determined to "build girls of courage, confidence, and character."

Barbie herself isn't inherently a bad guy, however much she's maligned. She's been a regular fixture of both my daughters' childhoods, as she was of mine. The Girl Scouts’ national headquarters says that the venture "focuses on career exploration and teaches girls about inspiring women in a fun way." But as New American Dream’s executive director Wendy Philleo explains, "This is product placement at its worst," a crass ploy to turn the Girl Scout uniform – and the little girls who wear it -- into a walking advertisement for a toy company. It's not in line with the values of service and action I learned as a Scout, and it's definitely not what my daughters and their fellow Scouts have any interest in being a part of either.

Less controversial is the Scouts' other new partnership with Lean In, to obliterate the word "bossy" from how we talk about girls and women. In the new campaign, which kicked off this week, girls can obtain sew-on fun patches and pins that urge we "Ban Bossy."

The sentiment is well-intentioned. As the Girl Scouts' online training materials note, "When a young boy asserts himself, he's called a leader. But when a girl does the same thing, she can be called aggressive, angry, or bossy." I understand that. I am all for instilling leadership and confidence in girls. That might be why I got my daughters into the Scouts in the first place. And I'm glad that Girl Scouts and the Ban Bossy initiative are teaching conflict resolution, though I honestly don't get how helping girls "speak directly with others about their feelings" with sample statements like "When you make fun of the way I dress, I feel hurt because your opinion is important to me" is the most forceful method of teaching them to stand up for themselves.

But as one who spent over a decade with the job title of self-proclaimed Bossy Stick of Salon's reader community, I also frankly hate the word "ban" -- a whole lot more than I do "bossy." "Bossy" is good enough for Tina Fey, and on the continuum of words that give offense; it's pretty damn low on the list. I also, to tell the truth, was not aware that there was a burning "bossy" problem in our vernacular. Are girls actively being held back in life because they're being systematically labeled with that specific word, "bossy"? I think I live pretty deep in girl culture, and the last time I heard the word "bossy" I was listening to Kelis. And alliterative though the "Ban Bossy" creed and hashtag may be, they smack of something enforced rather than encouraged. When someone says, as the Girl Scouts have, "Let's ban bossy together!" my response is, hey, nobody tone-polices my kids. You want to "ban" something? I recommend e-cigarettes.

I love the Girl Scouts. I have for almost 40 years. But the Girl Scouts I love are loyal and smart and silly and get stuff done. They aren't shills for Mattel, and they don't care about entirely made-up partnership campaigns against things that aren't serious problems. They aren't Barbies. They're just bosses.