Most despicable bank scam ever? How you may be paying them checking fees for following the law!

Bank of America will charge an extra $4.95 per month – for a checking account with fewer features than a normal one 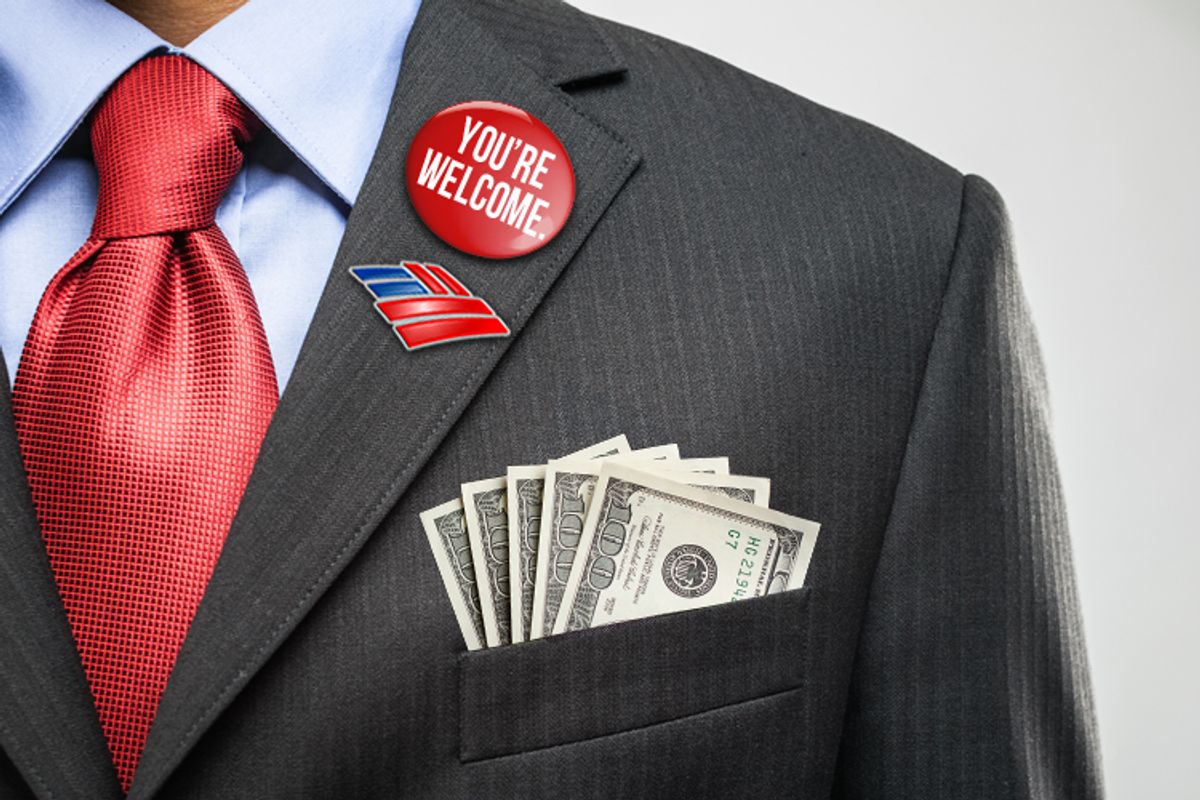 It seems that everyone has such low expectations of Wall Street, that when they rip off consumers slightly less than before, it’s cause for celebration. Witness the reaction, for example, to Bank of America’s new “Safe Balance” accounts, designed specifically for low-income customers.

BofA announced the account last Friday as a pilot program in five states and the District of Columbia. They call it a “checkless” checking account. It comes with no paper checks, so customers will have to pay bills online or use their debit card for purchases. The key feature of Safe Balance, according to the bank, is that it will not charge overdraft fees when customers try to draw more funds than they have. Instead of incurring charges up to $35 per incident, overdrawn transactions won’t go through.

This sounds like a nice enough idea, until you realize that it’s the law. 2010 rules from the Federal Reserve included a provision requiring banks to ask customers if they want overdraft protection. If the customer declines to opt in, the system would work exactly as with Safe Balance, with overdrawn transactions stopped before purchase. Safe Balance extends that protection to recurring transactions like gym memberships or monthly bills, but since there are no checks and that’s one of the only ways for people to use the account, it’s not much of an advance.

Though often misunderstood, overdraft “protection” itself is an Orwellian concept that merely gives the bank the chance to hit you with high fees they otherwise couldn’t capture. Federal regulators have already tried to curtail the practice, so Safe Balance represents no real difference from any other bank account.

That’s right, an account with fewer features than a normal checking account (without the checks, for example) – and with a core “feature” that is free on every other account –  will cost customers $60 a year. That’s not a lot, of course, but consider that the product is designed for low-income customers, who are typically on the knife’s edge with their finances. According to statistics from the U.S. Bankruptcy Court, the average individual in bankruptcy in 2012 was just $26 a month short on their expenses. So even small amounts count, especially when you’re paying for what should be free services. In essence, customers will give Bank of America $5 a month for the right to not be charged more.

Far from giving low-income customers a break, “Safe Balance” represents Bank of America’s evolution toward money-siphoning with a happy face. That’s certainly how the Wall Street Journal pitches it in their story, “Bank of America Seeks a Lift From Flat-Fee Checking.” The article explicitly states that the bank wants to raise revenue off a basic product “without alienating customers and lawmakers.” I guess it’s better to take defined, regular fees from people for services that add no value instead of random, variable fees.

Bank of America has tried for years to charge fees for everyday products like debit cards and checking accounts, but consumer backlashes stopped them every time. Safe Balance is nothing more than a kinder, gentler fee extraction opportunity. And the bank obviously needs to find more ways to make money off their customers; that $13 million a year for their CEO won’t pay for itself.

The most depressing part of all of this is the praise that has been laden on Bank of America this time for targeting low-income, unknowledgeable consumers with a flat-fee account that gives them nearly nothing of value. In a statement, Martin Eakes of the consumer advocacy group Self-Help said that Safe Balance “is exactly what civil and consumer rights advocates have been requesting for years from the nation’s largest banks,” calling it “perhaps the best product available in the market today.” He adds that “customers have repeatedly told us that they want to be able to spend only the funds that they have in their accounts.” Apparently Eakes didn’t tell customers that they could do that right now, without having to pay $5 a month for a checking account that “gives” them such safety. Eakes gives the game away when he casually mentions that Self-Help consulted with Bank of America on the design of Safe Balance. In fact, BofA worked with several consumer advocates on the account, which says more about the consumer advocates than it does the bank.

The germ of an idea that makes sense here is doing away with paper checks. The fact that we still have people write on a piece of paper to make payments, in a world of online connections and smart phones, is silly. And fewer and fewer people write checks, with the Philadelphia Federal Reserve predicting they could go away entirely within 12 years. Of course, this account targets the community least likely to have broadband or mobile access. But as that expands, the big banks should hop aboard with more options for online banking and mobile payments, allowing people to make purchases simply by texting.

What they shouldn’t do is charge extra for the privilege, which actually saves them billions in processing fees. Big banks think they charge fees because they have name recognition and a large footprint, creating the impression that customers have nowhere else to go. But free checking can still be free. The website Simple, for example, offers all the same features as Safe Balance, and the ability to write checks, with no fees at all. They have 100,000 customers in the U.S. in less than two years of operation, and recently sold to Spanish bank BBVA for $117 million (Simple will keep the name and all the features of their product).

If banks truly feel they can’t offer free access to simple accounts for low-income, underserved communities – and the fact that they have pulled their branches out of such areas is a pretty powerful indicator in that direction – then policymakers have the responsibility to deliver other options. One of them is to allow the U.S. Postal Service, a nonprofit government agency, to offer the same kinds of products, which would have multiple positive effects for society. Your annual income should not be a barrier to admission to the financial system, and the poor should not be a profit center for Wall Street.