Who will go to Fred Phelps' funeral?

The Westboro Church leader is reportedly "on the edge of death" 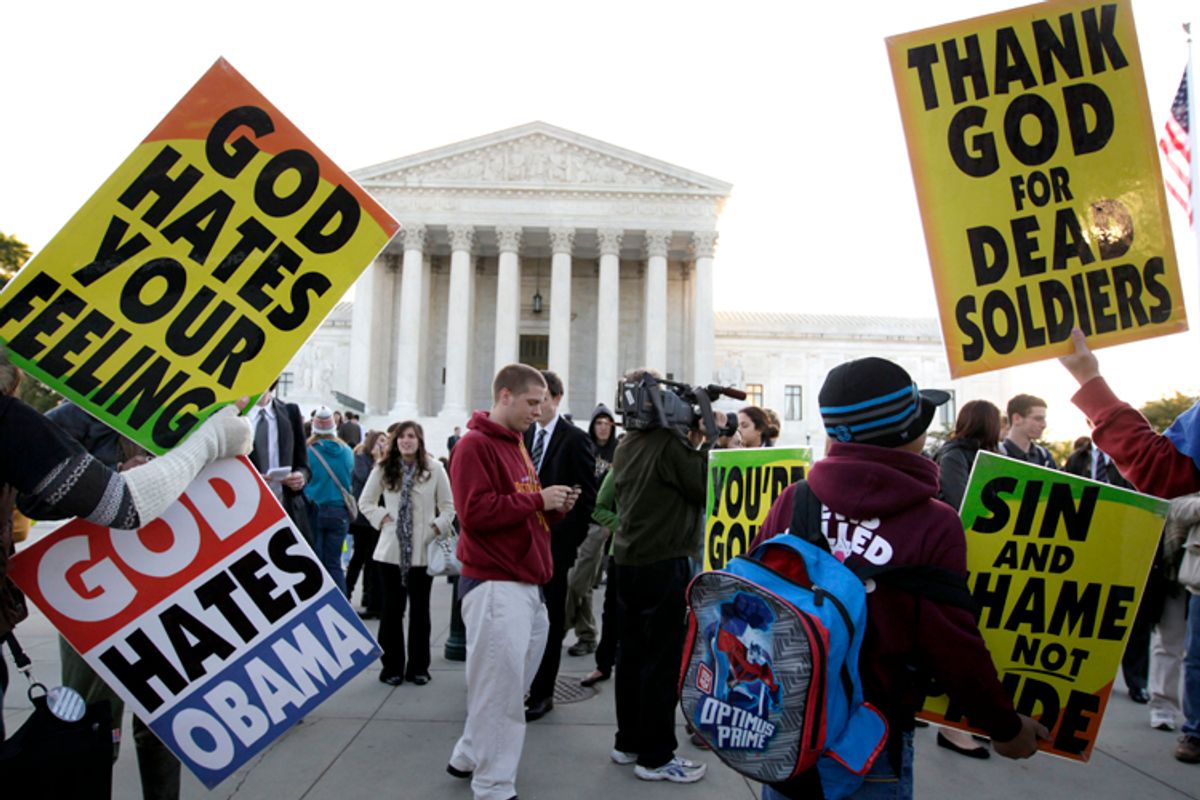 Members of the Westboro Baptist Church picket in front of the Supreme Court, Oct. 6, 2010. (AP/Carolyn Kaster)
--

There's a saying that goes, "Live your life so the Westboro Baptist Church will want to picket your funeral." But when the time comes, who will be there for Fred Phelps'?

Over the weekend, Phelps' estranged son and LGBT rights activist Nathan announced on Facebook that the 84-year-old patriarch of the hate-spewing Westboro Baptist Church was excommunicated from his own church last summer, and is "now on the edge of death at Midland Hospice house in Topeka, Kansas."

Just a month ago, a representative from the Westboro Church twice told the Topeka Capital-Journal that Phelps was "healthy." When challenged this weekend, church spokesman Steve Drain said only that "We don't owe any talk to you about that. We don't discuss our internal church dealings with anybody. It's only because of his notoriety that you are asking." But he added, "For a very long time, we haven't been organized in the way you think."

You're likely not shedding too many tears that Fred Phelps, a man so riddled with bile he was the head of a group that vowed to disrupt the funerals of the child victims of Sandy Hook massacre, will apparently soon no longer be sharing a planet with the rest of us. Oh, the man who popularized the phrase "God hates fags?" The one who's spent years sending his minions to stand around spewing vitriol wherever there are Jews, homosexuals, entertainers or groups of mourners? Not really crying over here. Even the cryptic revelation from Nate Phelps that since the summer, "He was moved out of the church and into a house, where he was watched to ensure he wouldn’t harm himself" doesn't rouse a whole lot of sympathy. And if you are having a moment of hope that his group's tactics will die with him, that seems sadly unlikely. Though the church itself has kept relatively quiet about Phelps' status, it's preferred instead to keep up with its usual announcements like Friday's notice that "Thank God for 4 more dead troops. We are praying for 4,000 more. We will picket their funerals in their home towns."

But if you're fortunate enough to not be as poisonous as the elder Phelps, you're maybe also not posting on Facebook to tell Nathan Phelps that "You are just as bad as him if you wish him to die" and "God hates Fred! That goes for you too, Junior." What a Westboro-worthy response.

Nate Phelps himself, like several other Phelps family members, long ago left the church and has been outspoken in his efforts to try to right some of the wrongs committed in the Phelps name. On Facebook this weekend, he candidly wrote, "I'm not sure how I feel about this. Terribly ironic that his devotion to his god ends this way. Destroyed by the monster he made. I feel sad for all the hurt he's caused so many. I feel sad for those who will lose the grandfather and father they loved. And I'm bitterly angry that my family is blocking the family members who left from seeing him, and saying their good-byes." It's an honest admission of the complex emotions surrounding the imminent loss of a person who was still, in spite of everything, a person. A father. And also, a "monster."

The worst thing that can happen is to become like the people who hate and demean us. It's hard, though, not to embrace the rage they so badly want to provoke. Yet in a statement this weekend, Thomas Witt of Equality Kansas firmly acknowledged Fred Phelps' and his flock's role in harassing grieving families, but urged a different response to the Phelps family. "This is our moment as a community to rise above the sorrow, anger, and strife he sowed," he said, "and to show the world we are caring and compassionate people who respect the privacy and dignity of all." That's what you do. That's how you cure hate.

There will likely be very few outside of his most intimate circle who grieve for Fred Phelps. But the rest of us don't have to celebrate his death either. He's lived a life of the most callous, consistent viciousness. He earned the moniker of "most obnoxious and rabid hate group in America" and alienated his own children and apparently even his own church. And now, the legacy of his actions is ultimately somehow even worse than having the Westboro Baptist Church picket your funeral. It's being a lonely, hateful old man. It's having, in the very end, almost no one show up for you at all.