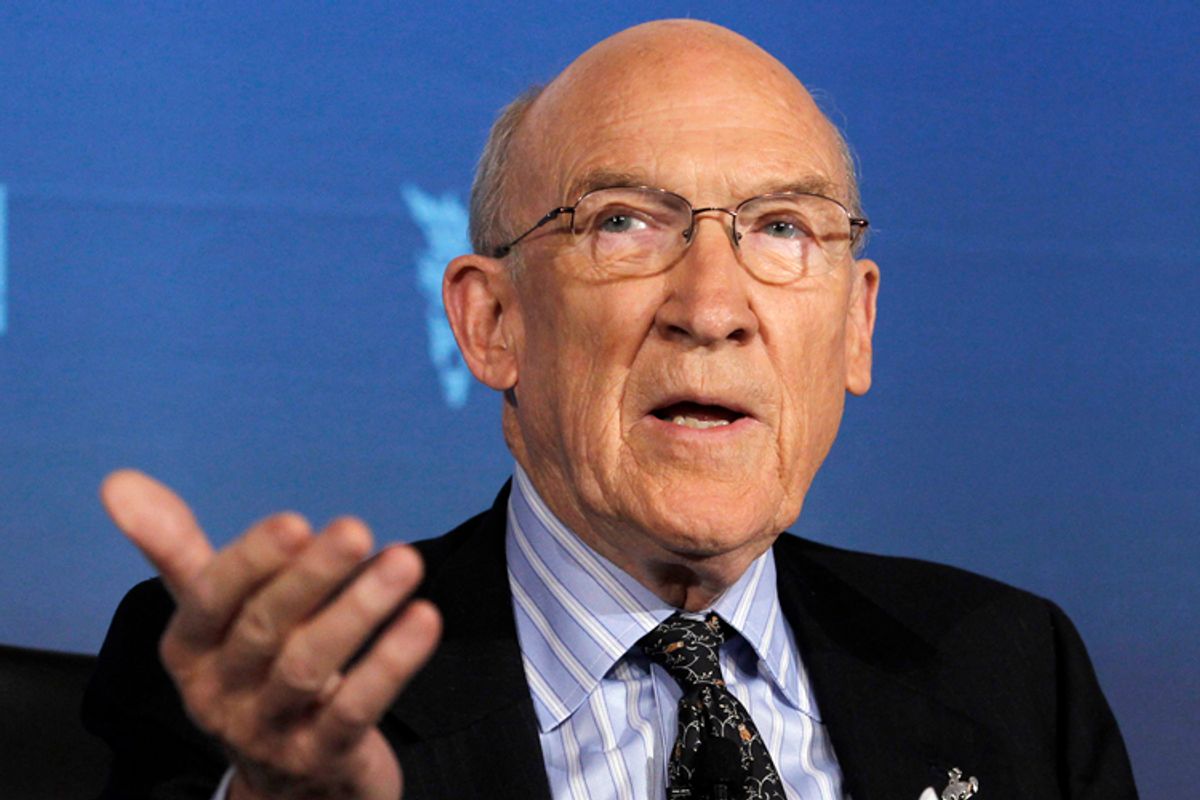 In 2010, President Obama elevated ex-Sen. Alan Simpson to center stage in Washington’s budget battles, appointing the Wyoming Republican to co-chair (with Morgan Stanley board member and former Clinton chief of staff Erskine Bowles) his National Commission on Fiscal Responsibility and Reform. Simpson and Bowles’ budget proposal received the support of a majority of the commission, and a passel of pundit plaudits, but failed to secure the supermajority of the commission required to formally advance to Congress.

“It was damn good,” Simpson told Salon, this week, “because it effectively pissed off everyone in America …”

While the Bowles-Simpson plan was embraced by some congressional liberals including Nancy Pelosi (and Obama issued subsequent deficit proposals Ezra Klein called “in almost every category, to the right of Simpson-Bowles”), it was panned by a battery of progressive pundits and economists. Paul Krugman called the plan “tax cuts for the wealthy, tax increases for the middle class,” and charged that it was “basically saying that janitors should be forced to work longer because these days corporate lawyers live to a ripe old age.” Dean Baker slammed the pair for “ignorance of basic economics” and “xenophobic fear-mongering” about China, writing that “the current deficit is a support for the economy, rather than a drain on the economy,” and “the transfer of wealth to China depends entirely on our trade deficit, which is determined by the value of the dollar, not the budget deficit.”

In an interview this week, Salon asked Simpson – now co-chair of the Pete Peterson-backed Fix the Debt -- about his past predictions of a supposedly imminent debt crisis, whether it’s fair for the retirement age to go up faster than many Americans’ life expectancy, and why his deficit commission plan would have capped federal revenue. The ex-senator told Salon that the current healthcare system "can’t possibly work," citing, among other culprits, "people with diabetes Type 2 -- that’s mostly self-induced." (According to the National Institutes of Health, "Family history and genes play a role in type 2 diabetes," as well as weight, diet and activity level.) A condensed version of our conversation follows.

I’m 29 years old. Why should I and my friends be more concerned about the debt than about climate change, or about mass unemployment?

Well, I’m 82, and when I was your age I didn’t think about anything. And as I watch … and then serve as co-chair of the National Commission on Fiscal Responsibility and Reform, and work on that for 10 months and hear the results: That we can’t grow our way out of this mess with double-digit growth for 20 years, we can’t cut spending way out of our – that won’t do it. You can’t tax your way out of this mess. So you ought to get serious.

So we did a 67-page report, which was serious. But it was – and it was damn good because it effectively pissed off everyone in America, which is the best way to do one of those …

2033, by doing nothing, you’re going to walk up to the window and get a [Social Security] check for 23 percent less. So I would think you would begin to pay attention. But if you’re going to say, “Well, I didn’t really think there’d be anything for me there in that time,” then you really have rot for brains, because you’ve put in 6.2 percent of your salary for 40 years.

So I would think you’d start paying attention. But probably, you won’t. Not you – just generically.

Should we increase the cap on how much income is taxable for Social Security?

Sure, and that’s in our report. I think you need to read our report. It’s 67 pages. It’s in English. It uses terms like “going broke” and “shared sacrifice” …

We would give the lowest 20 percent of people in that [Social Security] system a payment of 125 percent of poverty. We would give the older old, from 80 to 85, an extra percent. We would raise the wages subject to the tax to 190 [thousand] plus, and you can keep right on going after that. We change to the chained CPI … And then we said that retirement age should be raised to 68 by the age 2050. And the senior groups said, [switches to a funny voice] “Oh no, how will anybody ever be able to prepare for that? What’ll happen?” I said: Well you know, if that’s the way you’re gonna act, well, you’re the children.

Congress voted in 1983 to raise the Social Security retirement age by two years over a 22-year period. In 2007, the Social Security Administration found that for the bottom half of the income distribution, life expectancy of male workers who retired at 65 had only gone up by 1.3 years over the prior three decades. Do you see any problem with raising the retirement age faster than life expectancy for big swaths of the population?

When I was your age -- a little earlier -- there were 16 people, 15, paying into the system, and the next month, one taking out-… Today there are three people paying in and one taking out. How long do you think that’ll last?

You and Erskine Bowles have warned, including in a 2012 USA Today Op-Ed, that “we face the most predictable economic crisis in history.” In March 2011 you testified, “I think it will come before two years,” and that “within a year,” if debt holders “just thought you’re playing with fluff,” they’re “going to say, ‘I want some money for my paper …’ It won’t matter what the government does, they’ll say, ‘I want my money, I’ve got a better place for it.’” Were those predictions wrong?

You can play the games all you want. The tipping point will come when the people who have loaned us 20 trillion -- and that’s what it’ll be at the end of this decade if we don’t do something -- they will say: “Well, you have a dysfunctional government, and you’re addicted to debt, and guess what? We love ya, and we just want a little more money for our money.” And at that point interest rates will kick up, and inflation will kick up, and the guy who gets screwed is the little guy everybody talks about all day and all night. How’s that sound?

Is there any indicator that makes you think that that scenario is more likely or closer now than when you were testifying in 2011?

I have no idea. I mean, when you have your own government buying 85 billion a month of your own paper, which now comes down to 65 … It’s called tapering. And as they get off of that tit there, get the milk out of there, you’re going to find a situation where the markets are going to respond as they taper it down to nothing, over the course of a year, two -- I have no idea, but all I know is that there’s a tipping point …

At some point in time, either you pay your debt or you’re gonna be in deep trouble, just like in your house.

Given, for example, that the United States has a Federal Reserve, does thinking about the government like a household, does that make people understand federal budget issues better or worse?

I don’t know; if you handed a profit and loss statement and a balance sheet to 90 percent of the Congresspeople, they wouldn’t know what either of them were. So I wouldn’t worry about anybody figuring it out too much …

When you have an electorate that knows only one thing, that the market’s up, and the oil corporation’s got a lot of cash, and they’re getting a dividend, and the stock market’s up, who’s worried?

The Congressional Budget Office has reduced its projection of Medicare and Medicaid spending in 2020 by about 10 percent. Does that change how deeply you want to cut Medicare?

Forget what you call healthcare. Forget all the negatives of Obamacare, and all the nastiness that goes there, and repeal – that’s absurd – you’re not going to repeal something that big. You can go fix it … Out in the West here, we say, if you’re still thinking that way, it’s like the old cowboy says: If your horse drops dead, it’s better to get off …

You’re going to either wake up, deal with the issue, deal honestly with it, deal with math and not myth, deal not as a Republican or a Democrat, but an American, deal without the pressure from the senior groups and the veterans -- and with regard to healthcare, here’s all you need to know: It can’t possibly work.

And here’s why. You’re going to take care of a preexisting condition of a 3-year-old who might live to be 60. One person in the United States weighs more than the other two. That’s a sad statistic. You’ve got people with diabetes Type 2 -- that’s mostly self-induced. You’ve got 10,000 people a day turning 65. You’ve got people who choose to do booze, drugs and tobacco -- and if you think they’re going to the wellness program next week, the drinks are on me.

And then you’ve got to do something with a guy who regardless of his net worth or his income gets a heart operation for $200,000 and never even gets a bill …

Why did your Bowles-Simpson plan cap revenue at 21 percent of GDP?

Because we studied records of the United States, how it runs. We have less revenue coming in right now than we did during the Korean War. You need to read that. And you can’t run a country without revenue. And you can get revenue by going into the tax code.

And you can get that by ripping up the tax expenditures, and then going to a code which is simple, and flat, and really, I’m not going to – there’s no need for me to just bounce around with you – you read the report, and I’ll be glad to spend any amount of time with you, but not until then.

But why place that cap at 21 percent? Why eliminate the possibility of –

Well, go read it. Go, go read it, and you’ll know what historically it has been and why. Read it!