The "debate" over "Cosmos" is making us dumber 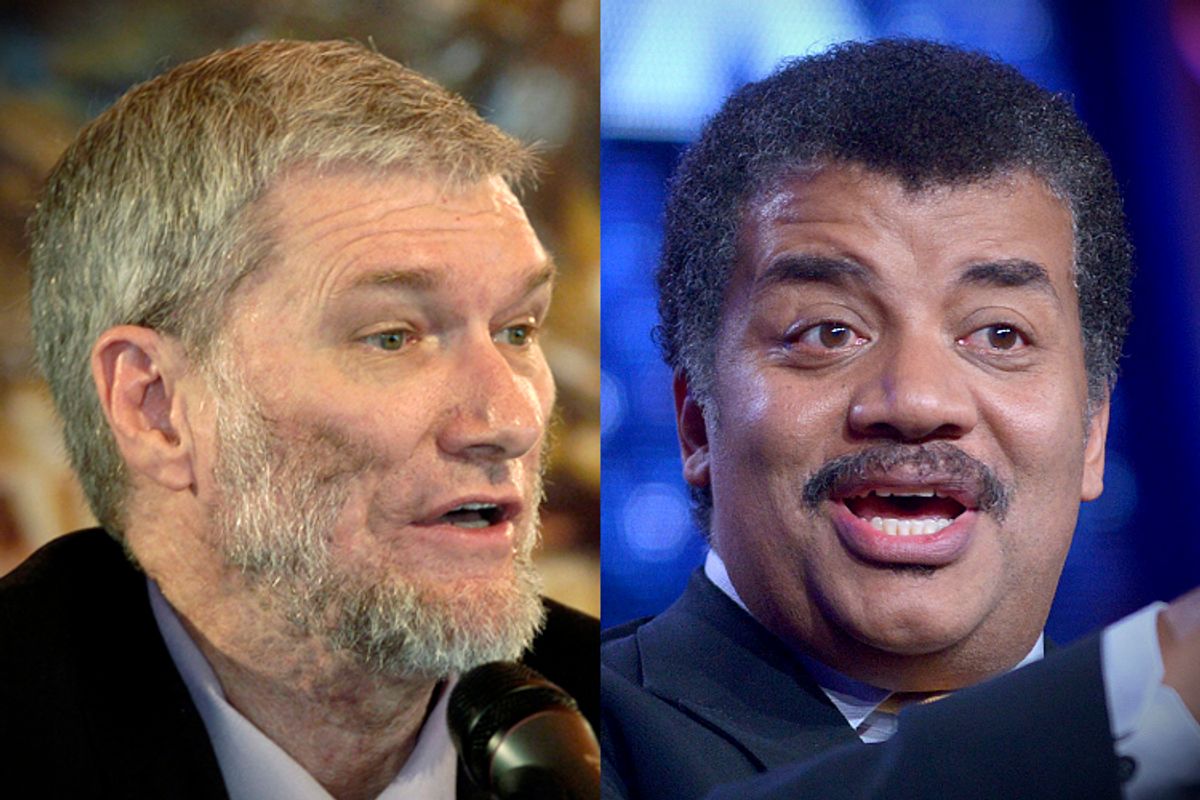 We Americans pride ourselves on our ideals of free speech. We believe in spirited back-and-forth and the notion that we are all entitled to our opinions. We stack our media coverage of news events with "opposing views." These ideals are deeply rooted in our cultural character. And they're making us stupid.

Ever since it debuted earlier this month, Neil deGrasse Tyson's blockbuster, multi-network reboot of "Cosmos" has been ruffling feathers with its crazy, brazen tactic of putting scientific facts forward as the truth. It's infuriated religious conservatives by furthering "the Scientific Martyr Myth of Giordano Bruno" within its "glossy multi-million-dollar piece of agitprop for scientific materialism." And this weekend, creationist astronomer and Answers in Genesis bigwig Danny Faulkner complained about "Cosmos" on "The Janet Mefferd Show" that "Creationists aren’t even on the radar screen; they wouldn’t even consider us plausible at all" and that "Consideration of creation is definitely not up for discussion," leading Mefferd to suggest equal time for the opposing views. But on "Late Night With Seth Meyers" last week, Neil deGrasse Tyson shrugged off the naysayers, noting, "If you don’t know science in the 21st century, just move back to the cave, because that’s where we’re going to leave you as we move forward." This is why he's a treasure -- he has proven himself a consistent and elegant beacon of how to respond to extremists and crazy talk – by acknowledging it but not wasting breath arguing it.

We can go round and round in endless circles about social and philosophical issues. We can debate all day about matters of faith and religion, if you're up for it. But well-established scientific principles don't lend themselves well to conversations in which I say something based on hard physical evidence and carefully analyzed data, and then you shoot back with a bunch of spurious nonsense.

This idea that we somehow have to be "fair" about everything is how we wind up having Bill Nye getting into public discussions about climate change, a spectacle my colleague Daniel D'Addario recently noted mistakenly gives the whole fiasco attention and credibility "as an entertaining, wacky debate between two personalities." It's how we wind up continuing on in a nation in which three out of 10 people take the Bible literally, and an alarming nearly 40 percent  believe in intelligent design. Roughly 18 percent of Americans believe the sun revolves around the earth. Should we have a debate about it? Should we hear out the "sun revolves around the earth" faction?

In our zeal for balance, we have allowed ignorance to be perpetuated. We send our kids to schools where the "Christian Perspective" is given weight as historical fact. We talk about the "debate" over climate change as if it's a "debate" and not a scientifically supported serious warning. We let other people's ignorant arrogance run roughshod over our own misguided attempts at open-mindedness.

"Cosmos" isn't trying to pick a fight. It's a love letter to the triumph of investigation over superstition. It's not perpetuating an agenda, other than maybe Neil deGrasse Tyson's perfectly sane advice that you "don’t try to use the Bible as a textbook." Or as Carl Sagan once said, "It is far better to grasp the universe as it really is than to persist in delusion, however satisfying and reassuring."