The next financial crisis looms: Here's where it may come from

Thanks to bank misconduct, odds are that trouble will present itself again soon. And this is what it will look like 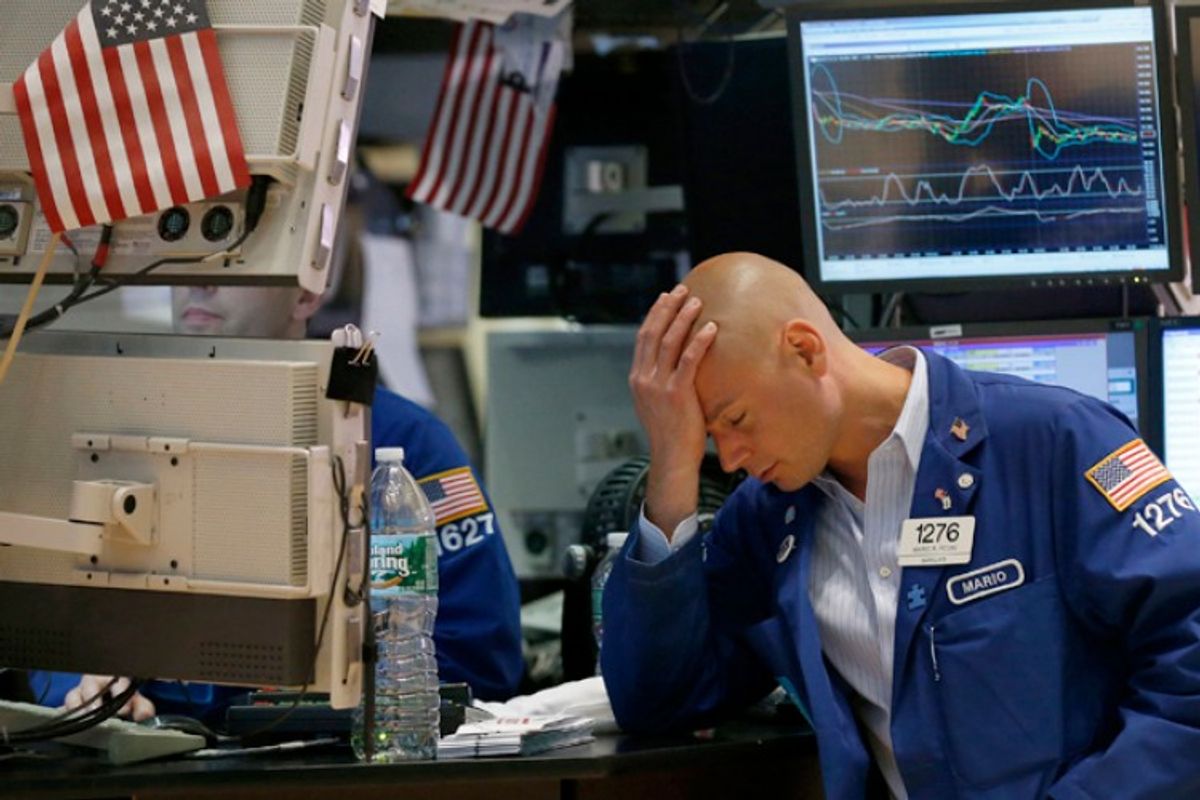 Bloomberg financial reporter Bob Ivry has written an entertaining new book, "The Seven Sins of Wall Street," which, instead of rehashing the various illegal activities that triggered the financial meltdown, focuses on what the banks have been up to since the crisis. Much of it would be familiar to readers of this space: the Bank of America whistle-blowers who were instructed to lie to homeowners, and received gift card bonuses for pushing them into foreclosure; the London Whale derivatives trade that lost JPMorgan Chase more than $6 billion; the investment banks who traded commodities while also operating physical commodity warehouses and facilities; and more. All the while, megabanks continue to enjoy subsidies on their borrowing costs because of the (accurate) perception that they will get bailed out in the event of any trouble.

The odds are that trouble will present itself soon.

Ivry’s opening quote in the book comes from Jamie Dimon, whose daughter asked him, “’Dad, what’s a financial crisis?’ Without trying to be funny, I said, ‘It’s something that happens every five to seven years.’” A quick check of the calendar reveals that we’re almost six years out from the bursting of the housing bubble and the fall of Lehman Brothers.

So are we on the precipice of another financial crisis, and what will it look like?

To be sure, danger still lurks in the mortgage market. The latest get-rich-quick scheme, with private equity firms buying up foreclosed properties and renting them out, then selling bonds backed by the rental revenue streams (which look suspiciously like the bonds backed by mortgage payments that were a proximate cause of the last crisis), has the potential to blow up. And continued shenanigans with mortgage documents could lead to major headaches. A new court case against Wells Fargo uncovered a bombshell, a step-by-step manual telling attorneys how they can fake foreclosure papers on demand; the fallout could throw into question the true ownership of millions of homes. Even subprime mortgages are in the midst of a comeback, because what could go wrong?

However, in this era of the government-backed housing market, new mortgages have largely gone through Fannie Mae and Freddie Mac, and the mortgage giants have diligently scrutinized them for defects. As a result, mortgages originated in 2013 have actually performed quite well. Industry types grouse that this leads to “tighter” credit; you could also call it “safer” credit, without the tricks and traps that preyed upon low-income Americans in the last decade. Proposed legislation to eliminate Fannie and Freddie could change this dramatically and return us to the Wild West show, but for the moment, financial risk may be located somewhere other than mortgages.

That’s not to say that Wall Street firms have been choir boys. The risk is merely harder to see, and you can’t just look at the banks. In fact, banks have reduced their stake in many normal banking activities, leaving things like small business lending to the shadow banking system. This is the broad term given to hedge funds, private equity firms and the labyrinthine deals they initiate to move money around. These less-regulated entities have increased their overall portfolios 60 percent over the past five years, bingeing on subprime loans to businesses that could not otherwise access traditional credit. Nontraditional leveraged loans, issued to companies that end up with large amounts of debt, have fewer protections for lenders and carry much more risk.

Typically lenders sell these loans off into the capital markets, where years of ultra-low interest rates have encouraged investors to search for any deal that will make them a bit more money. Thus we have seen an explosion in junk bonds, speculative investments in risky companies that return a high reward. Just as with subprime mortgages, these junk bonds feature shoddy underwriting, with money handed out to businesses that should in no way get an infusion of cash. Got an idea for a vegan restaurant on a cow farm? A lingerie shop in a nunnery? No problem, the shadow banking system will fund you! The junk bond market has doubled to nearly $2 trillion since 2009, causing more cautious investors to head for the exits, wary that the market could turn quickly. If losses mount and some of the bigger shadow banks take a hit, they remain so interconnected to the traditional banking industry that the risk could spread.

Regulators have displayed a vague awareness of these blind spots, though it may be too late. Recent actions from the Federal Reserve suggest that they are thinking about guarding against financial instability, amid concern that microscopic interest rates and expanded balance sheets have fed speculation. In addition, the Securities and Exchange Commission recently began looking into leveraged loans that have been packaged into bonds known as collateralized loan obligations, or CLOs. These CLOs are traded privately between buyers and sellers, so regulators cannot discern whether they hide risks, or whether the sellers cheat the buyers on prices. And some of them are “synthetic” CLOs – derivatives that are basically bets on whether the underlying loans will go up or down, without any stake in the loans themselves. Recently, commercial banks have attempted to get CLOs exempt from the Volcker rule, the prohibition on trading with depositor funds. CLO issuance has skyrocketed since this lobbying push, and it could be the next vessel Wall Street uses for their gambling activities.

But whether the SEC will actually enforce securities laws on CLOs, and drive them out of the shadows, remains to be seen. And other examinations of shady derivatives deals and price-fixing, if past history is a guide, will end with cost-of-doing-business settlements instead of true accountability. Meanwhile, we are told that the economy has little to fear from big bank failures. The Federal Reserve recently released results of its stress tests on the 30 biggest banks; it claims that 29 of them would hold up in the event of a deep recession. But the stress tests, designed in conjunction with the banks subjected to them, do not realistically measure the reality of a financial crisis, and if they did, the banks would all fail them.

Ultimately, we don’t yet know exactly where the next financial crisis will emerge. But we do know how the conditions for future crises get set. When law enforcement fails to prosecute Wall Street for prior misdeeds, they give no reason for them to curb their behavior. As the head of New York’s Department of Financial Services, Ben Lawsky, said recently, “There are certain bad apples in any large institution who are willing to push the limits. And if they don’t think there are going to be large consequences for them, they’re going to keep doing it.”

Similarly, the size and power of the largest financial institutions, which has only grown since the crisis, virtually guarantees similar outcomes. Congress and the White House have not yet moved to chop these behemoths down to size; as a result, their sprawling corporate structures and inadequate risk controls make them almost unmanageable.

It’s telling and sad that it took until the past couple of weeks for top regulators to publicly consider whether Wall Street exhibits a culture of corruption. Those seven sins Bob Ivry documents in his new book practically comprise a credo in the financial industry, with a desire for making fast profits, ignoring pesky things like rules or ordinary people’s lives, and offloading risk like a hot potato. We saw in 2008 how this puts all of us in peril.