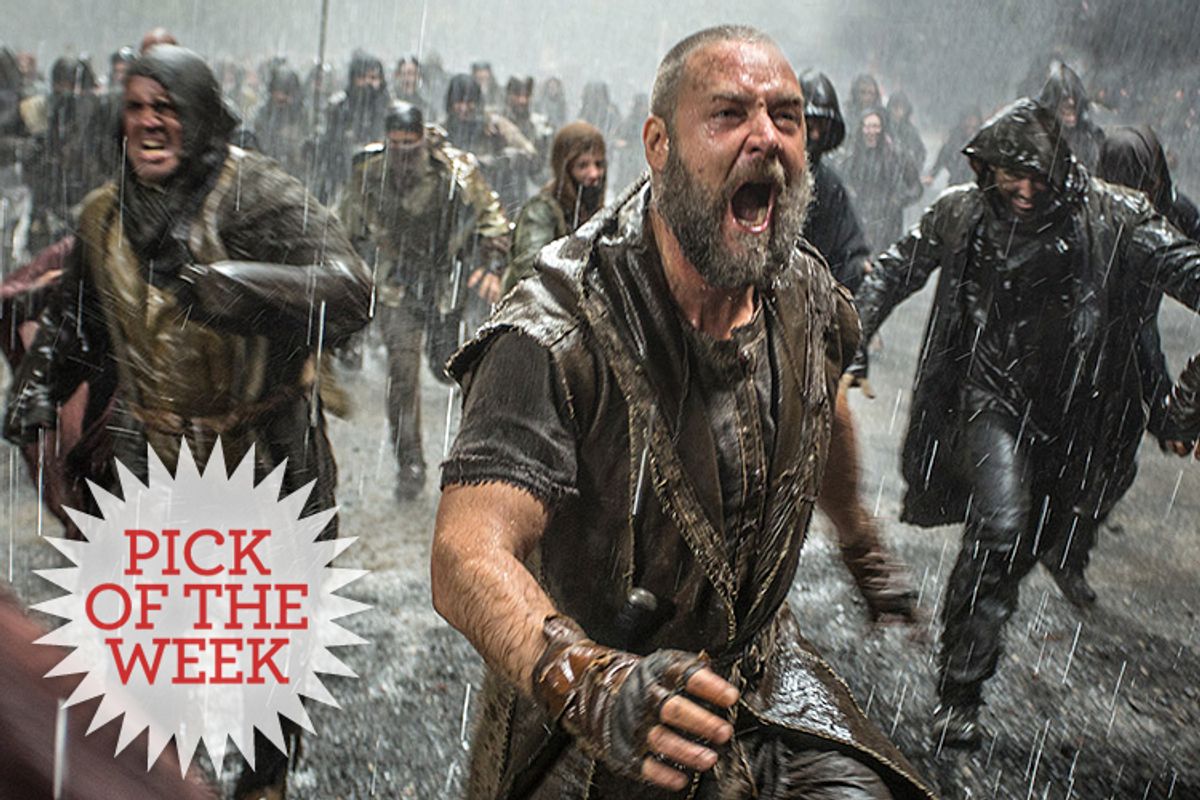 First of all, let’s acknowledge that Darren Aronofsky’s “Noah” was a bad idea. Sure, movies based on biblical material have been made numerous times in the past, and Ridley Scott’s upcoming “Exodus,” with Christian Bale as Moses, suggests the Old Testament well has not run dry. But most scripture-based films were made in a vastly different era of American cultural history, when Hollywood was devoted to delivering “family entertainment” and Christian fundamentalism barely existed as a social force. More recently, it’s been important to choose a side: Martin Scorsese’s “Last Temptation of Christ” and Mel Gibson’s “Passion of the Christ” were aimed at different audiences. This mightily strange motion picture, however, is a classic Hollywood blend of “devil’s candy” – a major movie star, the control-freak auteur of "Black Swan," a budget reported at $130 million and one of the sketchiest episodes in the Abrahamic tradition, drawn from a few sentences in the Book of Genesis – designed to please everyone and likely to please almost no one.

So there’s the bad news: “Noah” is a highly ambitious movie but in many ways a failure. It’s almost certain to wind up in that category critic Stuart Klawans has described as “film follies”: large, expensive and often career-swamping dream projects, in the tradition pioneered by Erich von Stroheim’s “Greed” and D.W. Griffith’s “Intolerance.” (A one-word title often seems to be a key ingredient: “Metropolis,” “Cleopatra,” “Fitzcarraldo,” “Ludwig.” Clearly Francis Coppola should have dropped the “Now” and just gone with “Apocalypse.”) But as with so many such follies, “Noah” is also worth seeing, and not just as a slow-motion car wreck made at vast expense. Amid the CGI elephants, the Nick Nolte stone giants, the overacting and dialogue howlers, the WTF science-fiction flights of fancy and the attempt to wrest a dramatic plot out of a bare-bones mythological narrative, there’s considerable daring, fire and passion in this tale of watery apocalypse. Not to mention a character perfectly suited to Russell Crowe at his most brooding and portentous. If we say that Crowe plays Noah as a domineering patriarch with an antediluvian moral code, I guess for once that’s not a metaphor!

There’s so much delusion and so much delight in “Noah” that I have trouble distinguishing one from the other, or determining whether its most outlandish flourishes qualify as mistakes or as strokes of genius. But let’s be clear that the CGI-animated opening sequence, an “earlier on our show” montage that tells the story of Genesis from the creation through Adam and Eve and Cain and Abel, is a mistake. Even there Aronofsky and cinematographer Matthew Libatique deliver striking images – the forbidden fruit of the Tree of Knowledge pulsing like a human heart; the father and mother of us all as golden-hued, naked super aliens – but the net effect is something like a Catholic Sunday-school video mixed with the scenes Ridley Scott rejected as too hokey for “Prometheus.”

That’s how we get to the quasi-modern, allegorical portion of the story, a labored vegan-environmental parable that has apparently upset some Christian viewers. On one hand we have the doomed descendants of Cain, who have built a great “industrial civilization” that has polluted the earth both literally and figuratively (that is, with mining sludge and dead machines, and also with sexual misdeeds). Then there’s Noah, who is descended from Seth, the third son of Adam and Eve (that part’s definitely in the Bible), and who lives out in the wilderness in hippie-mystical simplicity, literally raising his family on roots and berries (that part, not so much). That family includes Jennifer Connelly as Noah's unnamed wife, Douglas Booth and Logan Lerman as his sons Shem and Ham, and Emma Watson in an inflated and largely invented daughter-in-law role. None of them is as interesting as the diabolical and charismatic Tubal-Cain (growly voiced Ray Winstone), king of the Cain faction, who vows to kill Noah and take that damn ark for himself if the promised great flood actually shows up. Tubal-Cain is a great character full of venal and crude humanity, part Milton’s Satan and part Nietzschean Superman, and is also 99 percent made up. (In the Bible he is described as a maker of “all kinds of bronze and iron tools.” That’s it.)

Now, I’m pretty sure that Aronofsky and co-writer Ari Handel understood they were damned no matter what they did, when it came to adapting the brief and often bewildering account of the Genesis flood into a recognizable movie screenplay with human characters and a three-act structure. I suspect they would also tell you there’s some basis for all their eccentric interpretations, either in the biblical text itself or in the centuries of Jewish and Christian theology that followed. There’s apparently a rabbinical tradition that Tubal-Cain was the inventor of weapons and warfare, for instance.

This brings us, I suppose, to the Watchers, giant shambling creatures made of stone who help Noah’s family build the ark and also protect them against the rampaging hordes of Tubal-Cain in a tremendous and ridiculous battle sequence that has no relationship to anything in the Bible. There’s an extremely long-winded theological back story about how these guys are fallen angels who got coated in molten lava, and no, I’m not even kidding. Alert readers of the Bible will recognize them as the mysterious Nephilim, described in Genesis 6 as “sons of God … heroes that were of old” and the source of much exegetical agony. That’s all fine and dandy, I guess; Aronofsky and Handel have defined certain rules to their universe and want to convince us (or themselves) they’re sticking to them. In fact, the Watchers are part Transformers, part J.R.R. Tolkien’s Ents and partly that orange dude made of rocks from the Fantastic Four. In my universe, that’s enough.

There’s no way to be entirely faithful to the source material without being ludicrous, and Aronofsky and Handel have simply skipped over the most troublesome parts of the Old Testament account. In the text, Noah is 600 years old at the time of the flood, making his sons somewhere around 100 apiece. (Yeah, I know; aging was different back then, or something.) God gives repetitious and conflicting instructions about the animals on the ark: Bring “two of every kind,” except for the “clean” animals, whatever they may be; bring seven pairs each of those. Oh, and don’t forget “every kind of food that is eaten.” Pack enough of that to feed your family, plus all those animals. For 150 days. That issue is completely ducked, by the way; the animals show up on their own, buzzing, hopping and crawling two by two, in a big CGI parade, and then Noah and his sons move through the ark with some kind of magical incense dispenser that makes them all go to sleep and not eat each other. Brilliant!

God is never a character in “Noah,” although he has more lines of dialogue than anyone else in the original text, and his petulant but specific instructions to Noah come in the form of a dream that seems highly ambiguous at best. OK, you dreamed about water and a big boat – well, clearly that means that God is going to destroy all life on earth, except for you and your family! Throughout this story – which, in the original, barely qualifies as a story at all -- you can feel Aronofsky trying to split the difference between antiquity and modernity. On one hand, God is a spiteful bastard who’s had quite enough of the world of human beings, after barely 10 generations, and wants to wipe the slate clean. On the other, Noah is a conflicted father in psychological-realist style, torn between his deranged sense of Creator-derived mission (the word “God” is never used) and his love for his family.

There’s no real risk of issuing a spoiler to this story, is there? The water comes, in spectacular fashion, and then it goes; the ark beaches itself on Ararat, where Noah gets drunk and passes out naked. (That absolutely is in the Genesis account, although its significance – like the significance of the whole damn story -- is not entirely clear.) Visually, “Noah” is impressively bleak and grand the whole way through, but to my taste the human drama is greatly depleted once Winstone’s Tubal-Cain departs, along with Anthony Hopkins as Methuselah, Noah’s 969-year-old herbalist-healer grandfather. “Noah” is a grandiose and baffling journey that’s almost worth taking, a free-form adaptation of one of the world’s most famous myths that halfheartedly tries to appease those who long to take it literally. When it connects it’s awesome, and when it doesn’t it’s awesomely silly. If it’s a bad idea, at least it’s a bad idea on a grand scale, and a better bad idea than 90 percent of the ones that reach the screen from Hollywood.