If you believe an “emotional” and “stupid” jilted woman caused Bridgegate, I’ve got a bridge to sell you 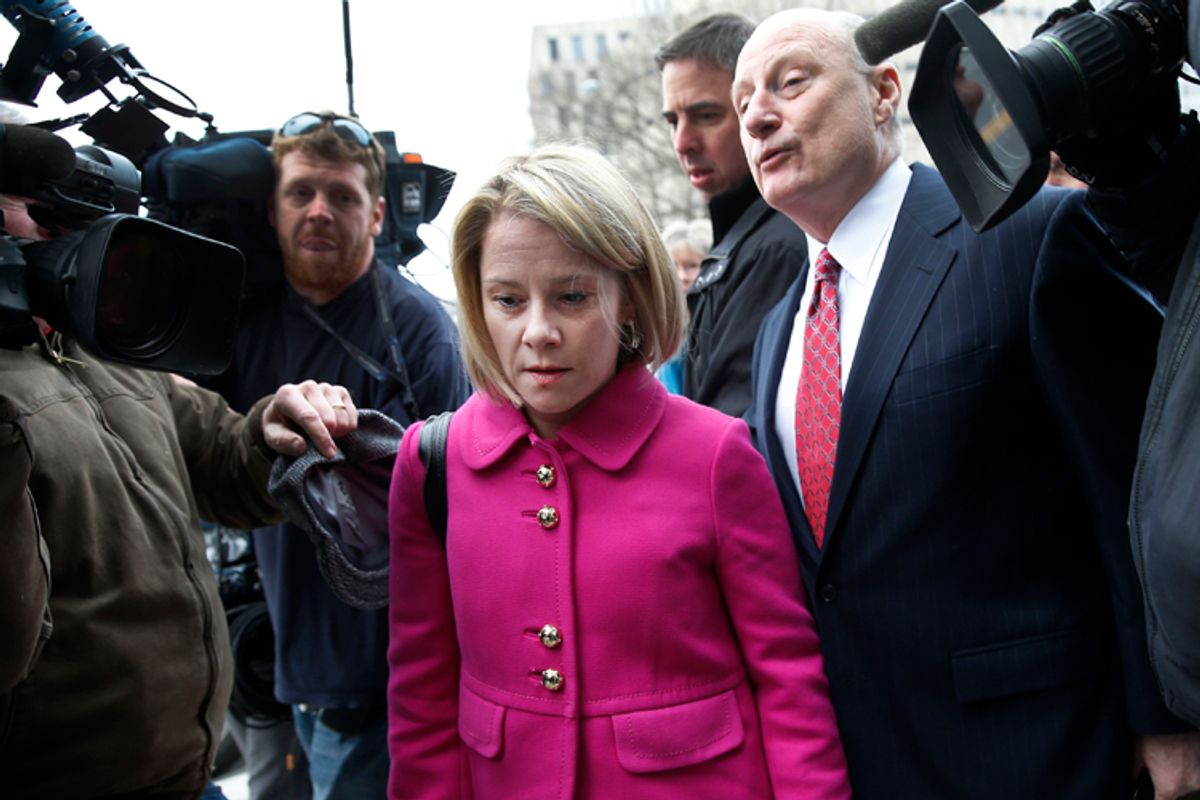 Bridget Anne Kelly makes her way through a crush of media with her attorney as she arrives at Mercer County Court in Trenton, New Jersey, March 11, 2014. (Reuters/Mike Segar)
--

Randy Mastro’s report put the blame squarely on two fired staffers, David Wildstein and deputy chief of staff Bridget Kelly. But its treatment of Kelly was mind-blowingly mean, describing her as “emotional,” erratic and as a liar; confirming Trenton gossip that she was “personally involved” with chief of staff Bill Stepien, and that Stepien apparently dumped her; alleging that she asked an aide to delete an incriminating email when the investigation began, thus implicating her not only in the plot’s execution but its coverup.

It even recommended that Christie abolish the department Kelly headed and fold it into another office.  Mastro stopped just short of suggesting the state torch Kelly’s office and salt the earth it once stood on. That may be what Christie plans to announce at his press conference this afternoon.

Christie’s lawyers’ treatment of Kelly was so shoddy that Stepien, formerly the governor’s former right-hand man, was forced to release a statement denouncing the report’s “gratuitous reference” to his “brief” relationship with Kelly as “a regrettable distraction.”

Blaming the woman goes back to Eve, so it shouldn’t be particularly surprising. But I still find this story bizarre: Why is Christie so determined not only to blame his former allies, but to shame them? He himself called Kelly “stupid” in his two-hour pity-party last January, while he depicted Wildstein as a high-school loser to his student-athlete-president demigod. Now his lawyers have used Stepien to smear Kelly – and that’s pissed off not only Stepien but Kelly’s friends, who took to the New York Times to denounce the report’s heaping dose of sexism in its depiction of Christie’s once fiercely loyal aide.

Mastro’s report maligns Kelly’s competence from the beginning, noting that she was promoted to Stepien’s old job “though she lacked Stepien’s expertise and background.” It even resorts to inaccuracies to heap blame on Kelly, the New York Times reports, accusing her of canceling meetings with Jersey City Mayor Steve Fulop after he declined to endorse Christie, when documents show others in the administration canceled the meetings.

Mastro’s report has done the seemingly impossible: It cost Christie the affection of the guys at "Morning Joe," which has been Christie’s clubhouse throughout the scandal. As Taylor Marsh details (I missed it), Mark Halperin called the attacks on Kelly “sexist and gratuitous,” while Scarborough compared Mastro to “Baghdad Bob.” Of course, they’re still protecting Christie by blaming the sexism on Mastro, when it’s unthinkable that the million-dollar report would have dumped on Kelly without Christie’s say-so.

Knowing Christie’s M.O., if the Mastro report becomes a new liability for him, he’ll probably throw the former prosecutor under the bus with Kelly and Wildstein. But he won’t do it with the textbook misogyny he broke out for Kelly. Christie is delusionally headed to Las Vegas to kiss the ring of Sheldon Adelson at the Republican Jewish Coalition meeting this weekend, still believing he has a chance to run for president in 2016. Good luck courting the women’s vote, Gov. Christie! Bridgegate is turning into Bridgetgate, another story about Christie's bullying sexism.