Why we fight about Colbert and Lena Dunham: Twitter politics are all we have left

Yes, social media's culture wars can get overheated and silly — because "real" politics is totally broken 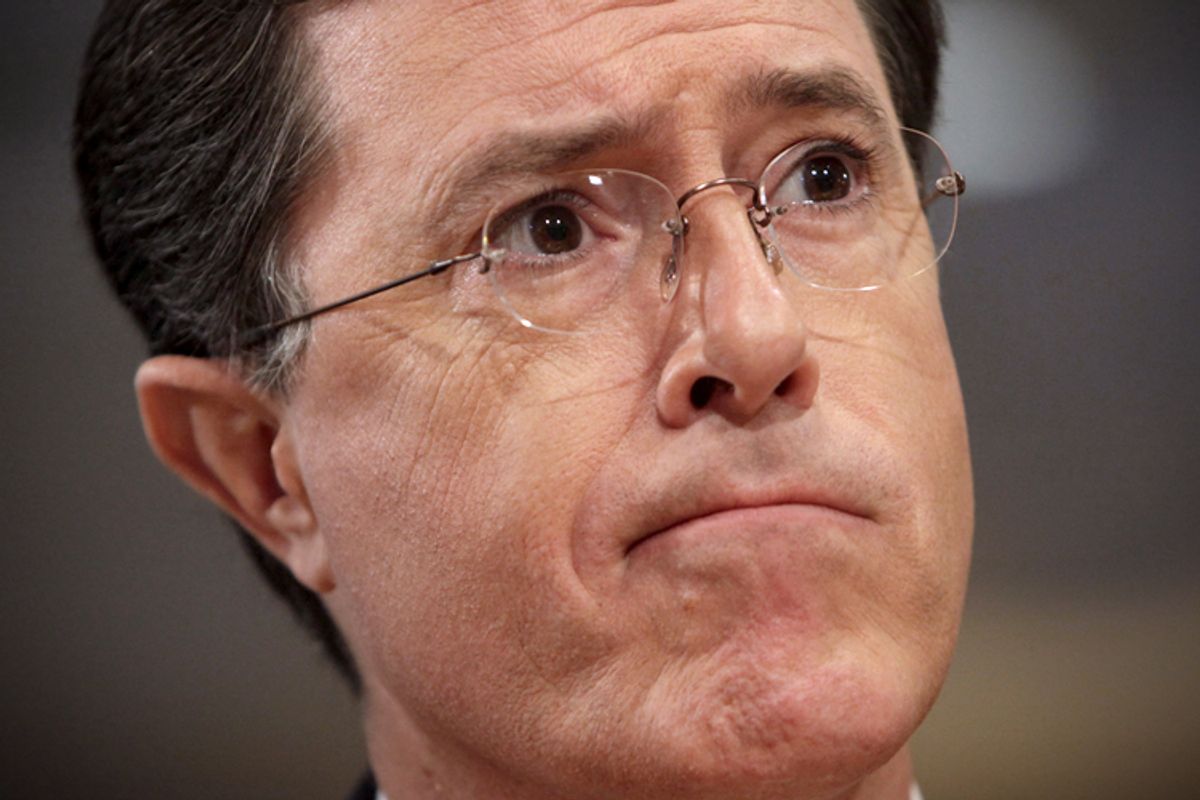 First of all, I don’t get to tell people not to be offended by a joke or a tweet or some potentially revealing public gaffe, just because I think I understood it better than they did. Personally, I think Stephen Colbert’s biggest sin in the dubious “Sensitivity to Orientals” gag that sparked so much Internet navel-gazing on Friday is that it’s overworked and not very funny. It was a satirical jab directed at both Rush Limbaugh and Washington Redskins owner Dan Snyder that was highly dependent on context; stripped of that context by the de-nuancing machine of Twitter, it came uncomfortably close to the kind of yahoo-flavored racist ugliness it was mocking. And, Stephen, that joke was never worth the risk in the first place. What we have here is a failure of comedy cost-benefit analysis.

But in this case, as in dozens of others of public discourse gone off the rails, I don’t have the right to instruct Asian-Americans or other commentators about whether or not they have been injured or insulted or attacked, or whether Colbert has something to apologize for. Let’s back up a year, to the 2013 Oscars: From the comfort of my sofa, I thought Seth MacFarlane’s “We Saw Your Boobs” musical number was pretty funny, and that its satirical intention, a takedown of Hollywood sexism and the “male gaze,” was clear enough. But the signal-to-noise ratio of MacFarlane’s shtick turned out to be way off, and millions of viewers received it in the opposite spirit, as a smug white dude making juvenile and offensive jokes about women’s bodies. So in that sense I was wrong. I’m still entitled to my private analysis, of course, but as a social event it wasn’t “funny” at all.

That might sound like I’m adopting a pose of excessive postmodern caution, or being the bearded dude in Birkenstocks who goes to the feminist bookstore to pick up chicks. But it’s more like an important lesson about life in a multivocal and diverse public culture, a lesson that, yes, white guys with media megaphones would do well to take seriously. Each of us needs to remember that our own subjectivity is not a universal condition, and that it was shaped by social and cultural forces we can’t necessarily see. Without any perception of your own possible or actual privilege and bias, you risk becoming the notorious Washington Post columnist Richard Cohen, utterly convinced that you are an enlightened and reasonable person and deeply, hilariously wrong.

That said, I do share the feeling that “progressive” discourse on the Internet sometimes feels too much like San Francisco in 1991, a shifting ideological mine field of hyphenate identities, ever-evolving nomenclature, “subject positions” and “intersectionality.” Attentiveness to language can lead to jargon-laden nothingness; the decoder ring of critical theory becomes an all-purpose tool for excavating hidden racism, sexism, homophobia or other forms of thought-crime. My onetime Salon colleague Michelle Goldberg recently (and fearlessly) went straight at this problem in a much-discussed Nation article about whether online feminism has become a toxic or puritanical police state, where those perceived as violating community rhetorical standards are pounced upon and exposed to public shame.

But the main thing to notice here is the same thing to notice in the efflorescence of “politically correct” discourse, and the backlash against it, in the ‘80s and ‘90s. That thing is power, and the question of who really has it. If you believe that feminist academics in Berkeley and Santa Cruz did or said dumb and unreasonable things in the P.C. glory days, or if you think that bloggers of color or LGBT commentators sometimes fly off the handle over minor perceived ideological offenses, then fine. But what power do those people have? The power to make others feel unfairly picked on, or to RT something mean? Let’s compare that to the power held by the corporate elite caste, the overlords of Wall Street and the City of London, the national-security state and the prison-industrial complex. Much of our contemporary political discourse — on the left, and I believe also on the right — stems from a confusion or misapprehension about the nature of power, and also from the fact that conventional politics appear permanently broken.

Now, the fact that the Internet and social media have opened the doors of the public sphere to almost everyone, including members of long oppressed or disenfranchised communities, is a complicated historical development. People have voices who never had them before, in an environment that rewards volume and outrage, and does not do well with complicated argumentation or shades of gray. This can definitely be uncomfortable for those who had gotten used to holding the mike, but I think you can almost draw an analogy with affirmative action. Yes, white workers suffered a loss of relative economic privilege, but it was global macroeconomic forces that drove down wages, not “unqualified minority applicants.” Blaming a handful of angry voices for the disordered nature of political discourse is a similar error.

One of the effects of the newly democratized public sphere, which isn’t good or bad in itself, is the intense focus on symbolic and/or rhetorical politics. Almost no division between public and private discourse is observed, and words — as some of those feminist academics told us a generation ago — become understood as political acts. Celebrities’ poorly worded or drunken tweets become political issues. So do the clueless remarks about sex and gender made by Republican candidates, the gender pronoun attached to Chelsea Manning and the 70-year-old nickname of Washington’s football team.

I am not arguing that those things are unimportant distractions from “real politics,” or that our cultural focus on such conversations necessarily detracts from other forms of political action. To use Marxist lingo, the “superstructure” of ideology and the “base” of economic power are intimately intertwined. The “Redskins” name reflects a long history of vicious and patronizing racial stereotyping directed at Native Americans that went virtually unquestioned until recently (and had pernicious real-world effects). Ignorant or misogynistic comments about women and rape made by Todd Akin, Mike Huckabee, Rick Santorum and others during the 2012 campaign reflected a deep anxiety about the social role of women within conservative politics. The fact that most media outlets moved rapidly from calling Chelsea Manning “him” to “her” reflected a new awareness and sensitivity toward trans people, a major step forward for a community still struggling to find its voice in the national conversation.

In the contemporary media landscape, however, those virtual politics threaten to become the only politics. I see the intense and overheated focus on misbegotten tweets and malformed public utterances as displaced energy, reflecting the fact that the official political system is completely paralyzed and meaningful social and economic change seems unachievable. As I said earlier, this isn’t limited to the left: It’s easy to mock right-wing hysteria over the modest market-based reforms of Obamacare (essentially a conservative scheme in origin) or the Tea Party’s conviction that a president whose economic policies are slightly to the right of Richard Nixon is secretly a combination of Patrice Lumumba and Pol Pot. But it’s more interesting to ask why these delusions persist: Because the symbolic politics of Obama’s presidency has driven many white conservatives nuts, and because the radical downsizing of the federal government they claim to want cannot be achieved.

Beltway politics are dominated by passionate and often outrageous partisan rhetoric, which cannot quite conceal the fact that Congress has become a useless, paralytic institution that can’t get anything done. Power lies elsewhere, and remains inaccessible. In a similar fashion, angry wars of words between and among self-styled progressives on the Internet do not entirely camouflage the relative powerlessness of everyone involved. Getting into a comments-thread battle or a Twitter-lather about Colbert’s bad joke or Lena Dunham’s fashion-magazine shoot or whatever other outrage du jour conveys a temporary feeling of pseudo-power, much as watching MSNBC (or Fox News) crow about the idiocy of the other side is pseudo-participation in a pseudo-democracy.

I would even take this a step farther and argue that the symbolic politics of the Obama presidency — the same factors that drive right-wingers crazy — are exactly what liberals and progressives like about it. I mean, what other explanation is there? Here we have an administration conducting a worldwide drone war that has killed unknown numbers of innocents, managing an ultra-secretive surveillance state beyond Dick Cheney’s wildest dreams, paying lip service to the existential crisis of climate change while doing nothing about it, and protecting and nurturing exactly the same cabal of bankers who brought us to the brink of financial apocalypse in 2008. For a candidate who ran as the populist embodiment of hope and change to wield such unprecedented and shrouded executive power is an irony that should keep historians of the future busy, providing we have historians or a future. But he personally seems like a cultured, funny, sharp-dressed guy who has gay friends and watches “Game of Thrones,” and the semiotics of his White House are awesome. So it’s all good.

But let’s back away from that, to the position that the mean Republicans won’t let Obama do anything, and so the politics of semiotic awesomeness are the best we can get. That too is demonstrative of our dilemma. We can’t do anything about worsening inequality or the poisoned planet or the total defeat of the labor movement or the broken immigration system or the incarceration of young black men. Our country is too “divided,” we can’t make up our minds about anything. The power to change those things, supposedly vouchsafed to us in the Constitution, has migrated somewhere else. But we can drive Gilbert Gottfried off Twitter for being such an enormous asshole. Change we can believe in.