In his final years, the actor spoke out against the growing problem of elder abuse 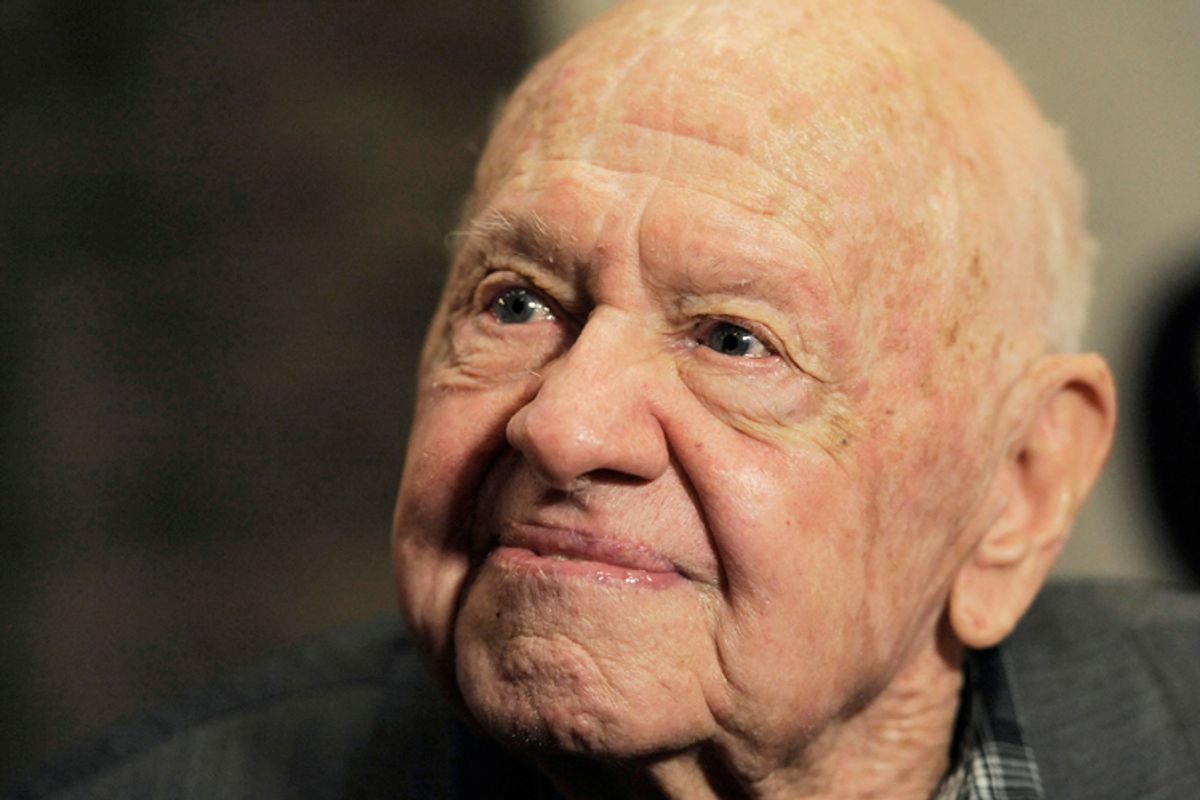 Mickey Rooney, who died Sunday at age 93, will be remembered by many as among the last of a long gone Hollywood era. An actor from the time he was a baby, he was a movie star in his teens, a frequent television performer in the early days of network drama and a character actor who in recent years was still performing in movies like "Night at the Museum" and "The Muppets." He was honored by the Academy Awards, Emmys and Golden Globes. He was a man so indomitable he was still spry enough just last month to attend Vanity Fair's Oscar party. But among the many accomplishments of his life and the roles he'll be remembered for, he was more than the sunny costar of old Judy Garland movies. He was, very late in life, an outspoken advocate on an issue that's increasingly commonplace yet still so little addressed. Rest in peace, Mickey Rooney, champion against elder abuse.

It was a subject he had intimate knowledge of. Three years ago, at age 90, Rooney spoke before a Senate Special Committee on Aging on the abuse he said he suffered at the hands of his adult stepson Christopher Aber, and about the special vulnerability of older Americans to physical intimidation, financial exploitation and emotional mistreatment. Rooney claimed Aber withheld his mail, medication and food, and made him a "prisoner in his own home," saying, "My money was stolen from me, by someone close. My money was taken and misused. When I asked for information, I was told that I couldn’t have any of my own information. I was literally left powerless." Last fall, Aber and his wife agreed to a $2.8 million settlement for "restricting access to his assets, misappropriating his name and likeness and verbally abusing him."

As the boomer generation ages into its golden years, elder abuse has become a more pressing topic. Just last week, the Iowa Senate voted to approve measures that would help older citizens protect their finances from potential abusers. The state's AARP says one out of every six adults over 64 has experienced financial abuse. Yet the challenges the elderly face are still not widely enough discussed or acknowledged. The Department of Health and Human Services' National Center on Elder Abuse notes that we now have the largest population of people aged 65 and over in U.S. census history -- and that up to 10 percent of older adults report they've experienced some form of abuse in the past year. Furthermore, it estimates that "only 1 in 14 cases of elder abuse ever comes to the attention of authorities." With rising rates of dementia and a growing population of individuals living in assisted living, the opportunities for fraud, neglect, exploitation and abuse are only going to keep increasing.

To go from being an autonomous, competent adult – maybe a breadwinner, maybe even a wealthy, successful actor – to a frail and helpless figure is a huge and difficult thing to admit to. To become a person at the mercy of others for the most basic care, to have outsiders telling you what to do with the money you've earned and saved, to be all but helpless physically -- these are deeply intimidating situations. And there's so much stigma around them, around acknowledging that you've been hurt, physically or emotionally or financially. What Mickey Rooney did, by taking his story public, by speaking out about his own experience, was to give elder abuse a name and a face. "You feel scared and disappointed, and can't believe it's happening to you," he said in 2011. "You feel overwhelmed." He understood that the first step to changing things is bringing them out into the light. He encouraged others to come forward with their own stories, and in doing so, he left a legacy of activism, proof that you can make a difference at any age, and send a message to others that "You are not alone and you have nothing to be ashamed of." He said, look, abuse can happen to anybody. But a 90-year-old man is still a man, and we all deserve dignity and respect, right up to our last breaths.