Controversial nun had a long history of anti-gay remarks 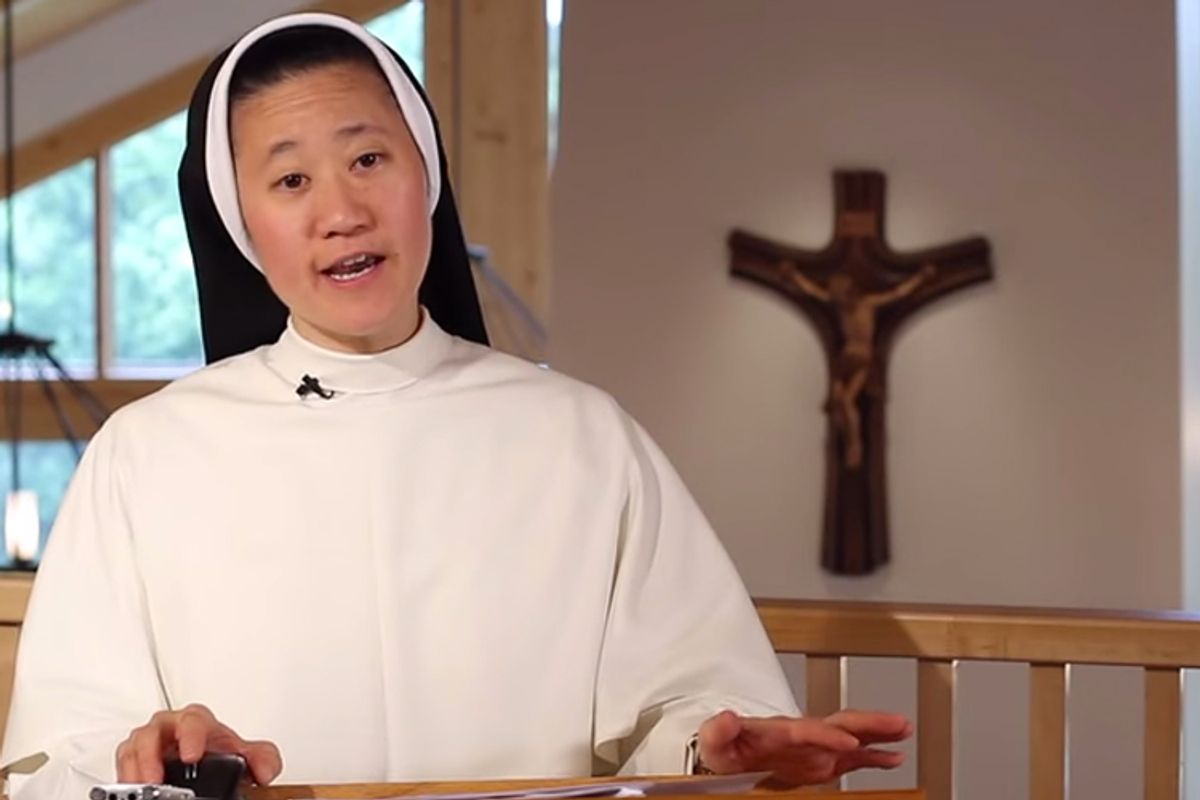 What's remarkable about the recent events that led Sister Jane Dominic Laurel to take a sabbatical from her teaching post at Nashville's Aquinas College isn't that she found herself in hot water after a controversial lecture last month at Charlotte Catholic High. It's that her incendiary speech appears to have not been a random case of going rogue. It was just that she finally found herself challenged on an incredibly dubious line of educational thought.

Sister Jane created a minor firestorm in March after she spoke to high school students and allegedly "told them that single and divorced parents caused kids to become gay; that homosexuals cannot live normal, productive lives; and that gays can't be good parents." When students later told their parents the nature of the talk, families protested and launched a Change.org petition, saying they would not have subjected their children to the talk if they'd known the full nature of it, and calling her remarks "offensive and unnecessarily derogatory." Just last week, Sister Mary Sarah Galbraith, the president of Aquinas College, issued a supportive statement saying that "The presentation was given with the intention of showing that human sexuality is a great gift to be treasured and that this gift is given by God. It appears that this message was not universally accepted. The hope of Aquinas College is that no one was left feeling that they are not loved by God." A counter petition supporting Sister Jane was also started, acknowledging that "She said that by partaking in masturbation will lessen your masculinity and that through the absence of a parent in the home will also make a greater risk for homosexuality."

But one day after expressing solidarity with the nun, Sister Mary Sarah issued a new statement on the college site, saying, "In her presentation, Sister Jane Dominic spoke clearly on matters of faith and morals. Her deviation into realms of sociology and anthropology was beyond the scope of her expertise… The unfortunate events at Charlotte Catholic High School are not representative of the quality of Sister’s academic contributions or the positive influence that she has had on her students. The students at Charlotte Catholic were unprepared, as were their parents, for the topic that Sister was asked to deliver. The consequence was a complete misrepresentation of the school’s intention to bring a message that would enlighten and bring freedom and peace."

Sister Jane's remarks at Charlotte Catholic High were not recorded, so all we have to go on are the reports from students. But if you're curious about the nun's vision of "freedom and peace," you're welcome to peruse her videos on "The Rich Gift of Love" from the Newman Collection, in which she explains that "If [a boy] didn't receive the acceptance, the physical affection, the encouragement from his father, he's going to have an emotional void… He's going to be longing for masculine affection…. What can happen is that the lines can get crossed and a man's desire for his father's love, his father's affection, can become sexualized and he can begin to think that he has a sexual desire for another man when in fact he doesn't. It's that he's missing his father's love." She then goes on to discuss sexual abuse, explaining that "Sexual abuse can cause a man to want do to another, act out in violence, in the sense of getting revenge or somehow psychologically resolving this problem of abuse. He can somehow try to make it right or get revenge for it in homosexual acts." She adds that "There was this one girl who found herself having a lesbian attraction. The reason was that her mother never really loved her." After watching the video, you can answer true or false questions like, "In Stage 2 we know one of the greatest difficulties and sadness that children can face is sexual abuse. This can cause confusion in Stage 3 and could lead to a man wanting to have intercourse with another man" and "Difference is the foundation for attraction." Another quiz asserts as "true" that "Oral sex is not part of the natural love between a man and a woman. It was actually imported by the homosexual culture." (PS Thanks, homosexual culture!)

This is Sister Jane's "Rich Gift of Love." It certainly doesn’t look like some random one-off in which she went off book about the causes of homosexuality or the emotional perils she discusses to in another of her videos about single parents. It's her well articulated and documented philosophy. And here's the thing. If you, as a conservative Catholic educator, want to peddle a narrow and traditional view of the roles of men and women and say that's how God wants you to roll, that's bad enough. If however you're telling teenagers flat out nonsense, pushing a fictitious view that, for instance, gay people are gay because they were damaged in childhood, you do not deserve to call yourself an educator. You do not deserve to get up in front of kids and talk to them. This isn't about morality or opinion or advice; it's about straight up intellectual dishonesty. The real mind boggler is, how had she been getting away with it for so long?

Sister Jane has cancelled her upcoming speaking engagements and is now commencing her sabbatical. Maybe she can use that time to read a few books, or talk to some gay people whose parents loved them just fine. And if she ever wants to teach again, it'd be great if she learned a few facts first.