If prepaid debit cards sound too good to be true, it's because they're a scam. Here's the hidden truth behind them 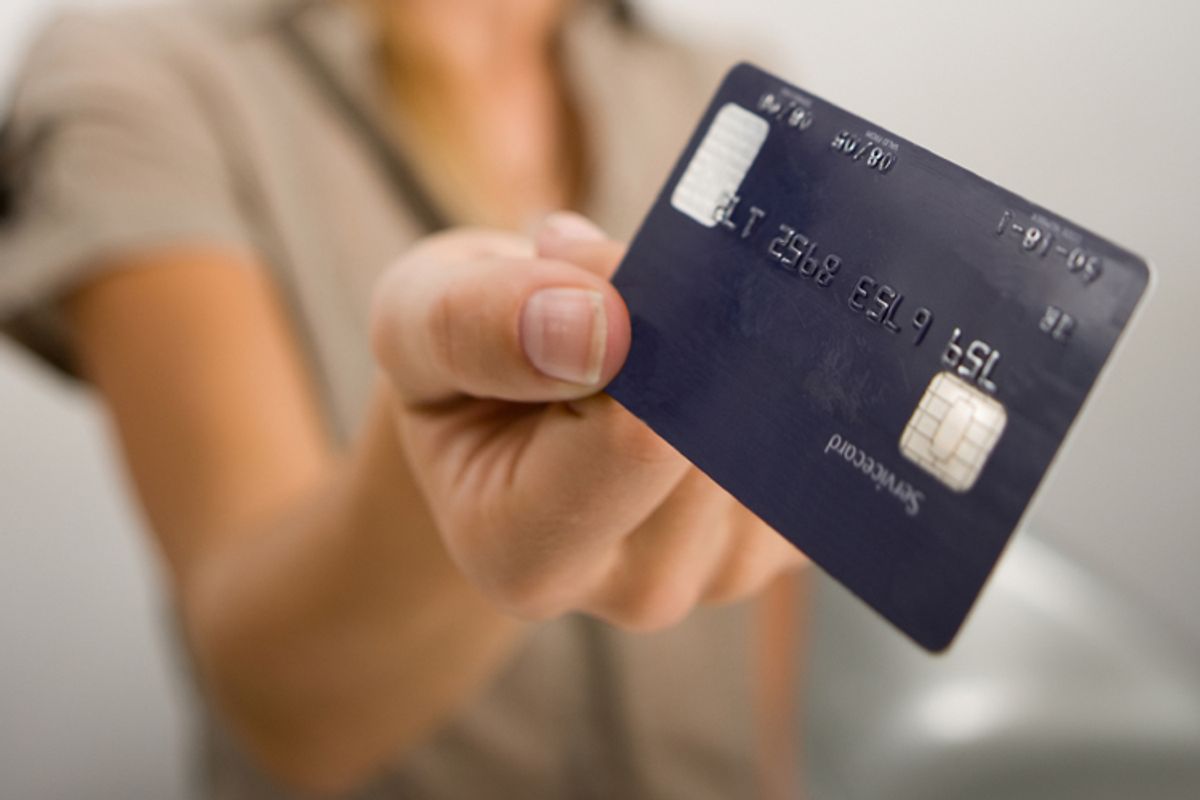 Lately I’ve been writing about the little indulgences we all pay to the financial services industry, just for the privilege of using the money we earn or making sure we can survive in a 21st-century world. If we want a bank account that complies with laws against hidden charges, we have to pay a fee. If we need to borrow a little money to make ends meet, we can get trapped in a cycle of debt. Even if we’ve done nothing wrong, predatory financial operators can come after us for debts we don’t owe.

Now, just when consumers think they’ve found a way out, a way to beat the system, the industry remains a step ahead.

Prepaid debit cards, which can be repeatedly reloaded with money and used to make purchases anywhere, have grown in popularity. Roughly 12 million customers loaded around $65 billion onto these cards in 2012, over twice the amount in 2009. This gives people an easy way to make purchases online and do all the things for which modern society demands a debit card.

The reloadable nature of the prepaid card, with the money securely stored and available to be used in any capacity, means it can function as a substitute checking account. Some cards even allow direct deposit and online bill pay. In fact, research from the Pew Charitable Trusts finds that, contrary to assumptions, most prepaid card users have used traditional financial services before. “Seven out of eight either have or used to have a checking account,” said Alex Horowitz, a research officer at Pew. The cards have become an alternative, rather than a first step into the financial mainstream.

What’s the biggest reason in the Pew survey for why consumers, most of whom previously had a bank account, now use prepaid cards? “A desire to control spending, control fees and avoid debt,” Horowitz told Salon. The beauty of prepaid cards lies in their simplicity; you can only spend what you have on the card. Consumers who use prepaid cards know they can be tempted by easy credit and swallowed by debt, and they want to basically place shackles on themselves to restrict overspending. The prepaid card functions like a credit card, then, without the trappings of one.

Prepaid card companies don’t give away their services for free, of course. Bankrate.com just analyzed 30 different cards, and found a varying suite of fees attached, including monthly maintenance fees, card activation fees, and fees on ATM withdrawals and balance inquiries. Some fee burdens are smaller than others, with competition from banks, new to the market, helping drive fees down slightly. Because commercial banks find the cards easier to maintain and service, they have priced them a bit below fees attached to their traditional bank accounts.

But prepaid cards do not currently have to follow any federal disclosure regulations, giving companies ample opportunity to hide the real charges. And that’s precisely what has begun, just as the industry matures into a major financial services provider.

NetSpend, one of the largest non-bank prepaid card companies, has become the first provider to add to its cardholder agreement an optional “overdraft protection” feature. This so-called protection allows customers to overspend the amounts on their prepaid cards three times a month, incurring a $15 fee each time. That’s a bit cheaper than overdraft fees on bank accounts, but they still can get expensive with repeated activity. The fees automatically get extracted the next time the customer loads money onto the card.

While customers must opt into the NetSpend feature, the profile of a prepaid cardholder is someone who specifically doesn’t want to be tempted with spending more than they have. “If credit’s available, they may use it,” said Alex Horowitz of Pew. This defeats the entire purpose of prepaid cards, and actually turns them into credit cards.

Nathalie Martin, a consumer law professor at the University at New Mexico, researched and found other prepaid card companies sneaking in overdraft fees, though actually determining that can be a struggle. Because practically every card maker names their fees differently, customers have to wade through confusing information on the back of the card packages and in hard-to-understand cardholder agreements, making comparisons difficult. Some companies appear to offer overdraft protection without the fee, but that may be a teaser to get people hooked on overspending.

“People use prepaid cards to avoid debt,” Martin told Salon. “But the lenders still want to make whatever money they can off people. They’re finding ways to use these cards to get you into debt again.”

This development comes precisely at a time when commercial banks have sought more profits from overdraft fees, hitting a record last year. And even when consumers deliberately try to avoid overdraft fees by moving onto prepaid cards, they could encounter them there as well.

Prepaid cards are largely unregulated at this point, giving financial companies the opportunity to attract consumers and then spring the fees. What’s more, most prepaid card agreements force customers to settle disputes through a third-party arbitration process rather than the judicial system, giving individuals far fewer protections in the event of abuses.

The Consumer Financial Protection Bureau has given advance notice that they will propose federal rules for prepaid cards, expected sometime this spring. While CFPB seems primarily interested in universal disclosure, the Pew Charitable Trusts recommended that the consumer agency ban overdraft of any kind on these products. “It’s appropriate for prepaid cards to be limited by the amount of money on them,” Alex Horowitz said. “That’s the card’s signature feature. If people want a product with overdraft, they could get credit cards.”

Consumer law professor Nathalie Martin sees a pattern of plodding regulators arriving with rules right when the financial industry has moved on to its next innovation. “This is like a big Whack-a-Mole game,” Martin said. “You regulate one product and then they shift into another product. The lenders stay two steps ahead of the regulators.”

If regulation simply cannot catch up, maybe policymakers need to innovate as fast as the industry. Perhaps competition, in the form of a postal bank account with no demanding profit motive to rip off customers, could do the work regulation cannot. Low-income Americans, in particular people of color, simply need a safe place to store and use what little money they can muster, without having those funds become targets of some greedy corporate strategy. Since the financial system treats this vulnerable population as marks instead of customers, they need the security of a public option.