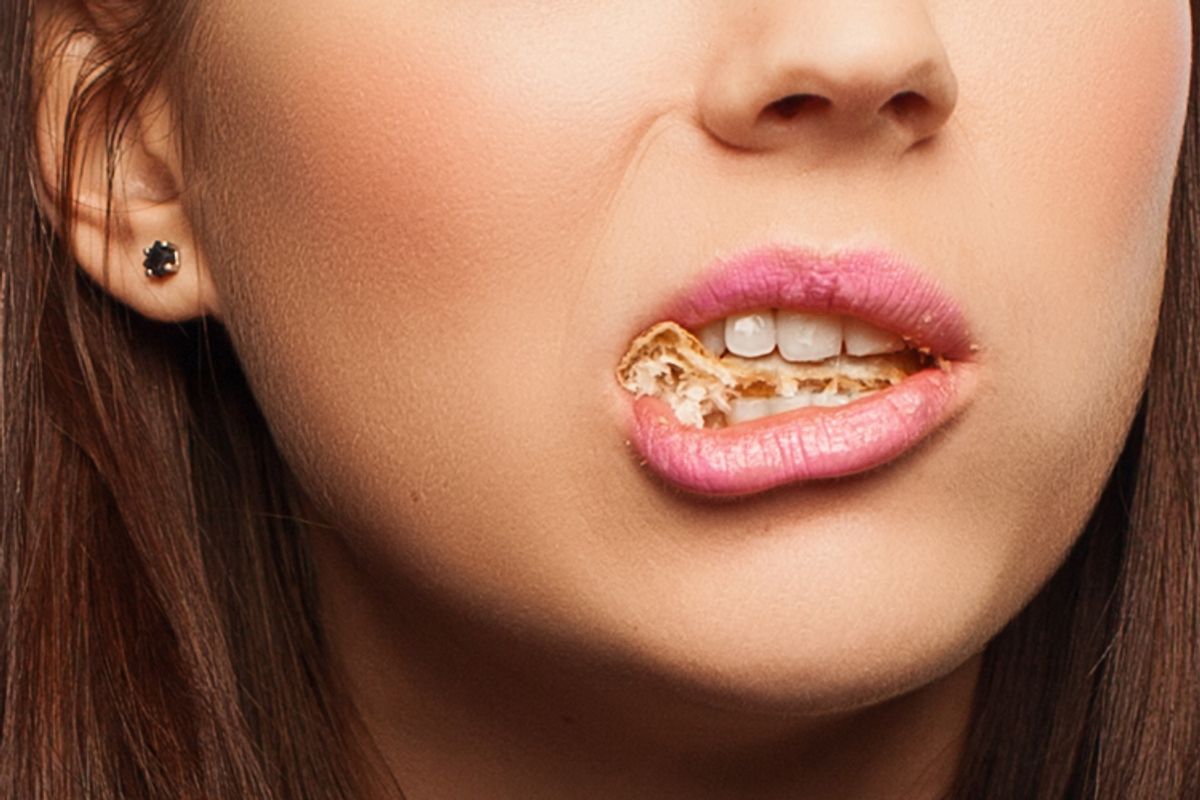 "Catching people unawares is the art," says Tony Burke. But Burke is not exactly a gimlet-eyed Vivian Maier-like chronicler of the intimate and poignant aspects of contemporary public life. No, he's the guy who came up with Women Who Eat On Tubes.

Burke's Tumblr and related Facebook page (And in case you're wondering why I'm not linking to them, it's because eff that, that's why) are, in the scheme of an online culture in which graphic rape jokes and imagery are all in a day's content, relatively tame stuff. They're an invitation to fans to simply follow one directive: "Next time you're on the Tube look out for the amount of women eating. Then take a picture and post it here." Certainly not upskirt territory, or even the Girls In Yoga Pants Tumblr fetishizing. Yet Burke's fascination with this supposed phenomenon does have a certain unnerving edge, one that has not abated an iota in the nearly two and a half years of the WWEOT Tumblr. As he explained when he launched it, "Everywhere I go I see women eating on tubes. Like little mice hiding packets of crisps and biscuits in their bags and purses. Slowly, secretly, guiltily raising each bite-sized morsel to their salty lips in the hope that no one’s watching. Well, I'm watching. And I'm photographing, documenting the fascinating world of the Women Who Eat on Tubes." Christ, it's a Police song with McVitie's.

To that end, he has filled his site with images – mostly out of focus and open-mouthed, of ladies caught mid-public transportation nosh, and grown his Facebook group to 22,000 members. Gosh, it just makes me want to run out, hop on the New York City subway system and make Men Blowing Their Noses a thing! It's also attracted a fair amount of criticism and disgust and charges that it's "bullied and humiliated" it's subjects. Writing in the Telegraph this week, Radhika Sanghani called it "stranger shaming," and writer John Niven pointed out Friday, "Dude: if only you'd done 'PEOPLE Eating on Tube', then you'd just have been a failed artist. As opposed to a pervy failed human." Transport for London director Steve Burton is meanwhile encouraging commuters to fight back, saying, "Though taking photos of people on the Tube is not illegal, we ask anyone doing so to ensure they respect other passengers. If any customer has concerns about such behavior, believing there may be a sinister motive, they should speak to the British Transport Police."

Nobody thinks that the London underground system, or any subway, is a private space. If you want to clip your toenails or get in a fight or possibly even have a moment that's a little magical and sweet, it's fair game that someone else may be recording you for posterity. And Emma Carr, director of Big Brother Watch, is surely grasping at straws in telling Metro UK there should be laws against this kind of photography. But it's also fair to say that if you're tracking down only ladies, and encouraging others to do the same, you're coming across as some kind of weird deviant playing out fantasies. Burke told the Telegraph earlier this week, "I’m not some kind of weird deviant playing out fantasies. If the odd stray banana shot and salacious comment gets through, then so be it."

Public photography almost always has a voyeuristic element to it, and in the age of Instagram anyone with a phone can claim, as Burke does, "You’re capturing a moment that will never be repeated. It’s ridiculous. It’s banal; it’s the most normal thing in the world: eating. We transport it into high art." But you've got to be kidding when you call women "little mice" and compare your approach to your poorly composed creepshots to "the way a wildlife photographer cherishes a kingfisher in a river." And when you say on your Facebook page that "Women are embraced and cherished. We celebrate and encourage women eating food on tubes. We do not marginalize them. We always look for the story in the picture," you're pretty much full of it.

Trust me, I would love to live in a world where clueless dudes do not still need to be schooled about boundaries and respect. But here we are, so let's do this. First of all, we females don't actually need you to "embrace and cherish" us, thanks, any more than we need to be compared to rodents or fish. You don't have to pretend your weird obsession is some homage; that's just an insult to our intelligence. Second, we're just humans trying to get from point A to point B, possibly eating some French fries along the way. When we open our mouths and put food in them, it's really, I swear to God, not for your entertainment. Creating a treasure trove of photos and enlisting others in your hide and seek game may be not against any of the rules of society, but it just plain rude. Commuting is bad enough without having to wonder if some dork is photographing your Piccadilly Line sandwich consumption. It's especially bad enough for women, who in their daily travels – especially in the crowded spaces of transportation -- frequently endure catcalls, groping and all manner plain old unwanted attention. And do you know what photographing them while they're eating is? It's that last one: uninvited attention. Third, when a caption of three women sitting together on the Tube and eating is "Three little pigs," I don't believe you when you say this is about embracing and cherishing. When you note that "She just couldn’t stop jamming those party wafers in her mouth," I am sensing judgment, sir. Writer Sophie Wilkinson, who found herself starring in a WWEOT post recently, would like concur. In an essay this week she asked, "Who gave this Facebook group of collected strangers the right to police my behavior because of one thing I’ve done when I’m on a near-deserted train carriage?"

The daily pageant of life can make for compelling photography, and the boundaries of what's appropriate and what's invasive are not clearly marked. But let's not pretend that targeting females and snarking on the fact that they're audaciously engaged in the act of publicly consuming food is an art project. And we don't need any photographs at all to get a clear picture of a group that's just cowardly -- and incredibly immature.