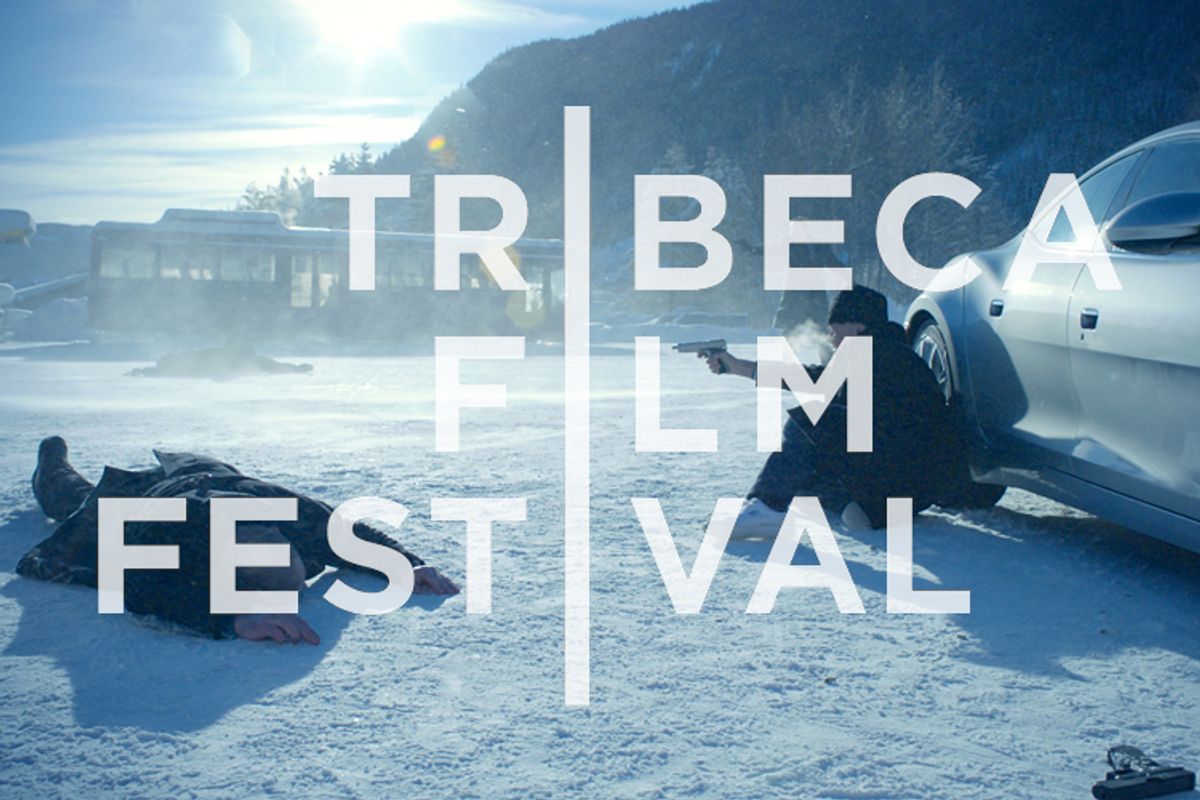 A still from "In Order of Disappearance"
--

Here’s one testament to the strength of the Tribeca Film Festival, which was founded in the wake of 9/11 to jump-start downtown Manhattan’s cultural economy and has become entrenched on the New York calendar: I no longer try to make sense of its role in the ecology of the movie business. The weather on the East Coast is finally acceptable, the festival fits neatly between Sundance and Cannes on the calendar, and Tribeca’s programmers shovel a lot of interesting new films in front of Manhattan audiences and find out what sticks. That’s more than enough.

Although Tribeca professes no conscious programming strategy, and this year’s lineup features just short of 100 feature films in all possible genres and from many different countries, a certain personality has emerged nonetheless. It’s become an outstanding showcase for news-making and innovative documentaries – I’ll never forget the waves of New York emotion surging through the room during the premiere of “Man on Wire.” And Tribeca’s sharp-eyed programmers caught on early to the “Fantastic Fest phenomenon,” meaning the fact that horror films and other genre fare were becoming more ambitious and more significant, especially as the high-low cultural dichotomy disintegrated and the mojo of old-school indie film fled to cable TV. (I am not, however, persuaded that “Zombeavers,” the last film in this year’s alphabetical listing, sounds like a good idea.)

There’s way more stuff to talk about than I can possibly cover, including the nearly unique Tribeca niches of music-themed and sports-themed documentaries. The festival kicks off on Wednesday night with the Beacon Theatre premiere of “Time Is Illmatic,” a 20-year look-back at Nas’ crucial New York hip-hop album “Illmatic,” followed by the Queens-born rapper performing the whole album live. NYC sports buffs, meanwhile, will geek out on actor-turned-filmmaker Michael Rapaport’s “When the Garden Was Eden,” an ode to the 1970s glory days of the New York Knicks. Here’s my current best guess about the Tribeca movies likely to make a cultural splash in the months to come – plus one or two I just threw in to please myself. Stay tuned for updates.

The Newburgh Sting When four men were arrested in the impoverished Hudson Valley town of Newburgh, N.Y., in 2009 and charged with planning to bomb synagogues in the Bronx, they were presented by the government as a “domestic terror” cell who were maybe, kinda-sorta linked to al-Qaida. Nope, not really. The story in Kate Davis and David Heilbroner’s documentary is a less exotic but sadly familiar one of race, poverty, inequality and government entrapment.

In Order of Disappearance For the small but select audience who loved Hans Petter Moland’s deadpan crime comedy “A Somewhat Gentle Man,” with Stellan Skarsgård – they’re back! This time Skarsgård plays an upstanding citizen who takes on the Serbian mafia and a sinister local crime lord after his son dies of an overdose, all of it set, of course, against the Norwegian winter and the crumbling welfare state.

Mala Mala Visually accomplished, occasionally outrageous, often moving and ferociously entertaining, Antonio Santini and Dan Sickles’ documentary about the lives and struggles of several transgender women (and one trans man) in Puerto Rico seems perfectly timed to be one of 2014’s big doc hits. Not only is trans freedom one of the issues of our time, this also offers a vivid social tour of a unique Caribbean island that both is and is not the United States.

The Canal There are numerous horror movies on offer in this year’s Tribeca lineup (once again, you're not convincing me to sit down and watch “Zombeavers”), but this one, from Irish director Ivan Kavanagh, has the most serious buzz. It’s about a young family moving into an old house where something dreadful happened – stop me if you’ve heard this one before – but evidently comes freighted with film history, tremendous psychological tension and some truly frightening surprises.

1971 You’ll be hearing more about this inspirational historical doc from Johanna Hamilton, which tells the amazing but true story of a ragtag group of antiwar activists who stole files from a suburban FBI field office in Pennsylvania and flung open the doors on the biggest domestic surveillance program of the pre-9/11 era. They stuck a fork in J. Edgar Hoover’s rear, they paved the way for Daniel Ellsberg and Edward Snowden and they got away with it clean. Four decades later, they’re ready to talk about it.

Night Moves Already controversial, the new film by Kelly Reichardt (of “Meek’s Cutoff” and “Old Joy”) stars Jesse Eisenberg, Dakota Fanning and Peter Sarsgaard as radical activists plotting to blow up an Oregon dam in an act of eco-sabotage. If anybody in contemporary feature film can capture that world, it’s probably Reichardt – but can she make a thriller?

6 and Virunga Oscar-winning Louie Psihoyos (“The Cove”) returns with “6,” a guerrilla-style inquiry into the international trade in endangered species that is reportedly hair-raising – but will be shown at Tribeca as a work in progress, so reviewers are being told to hold off. In a similar vein comes Orlando von Einstedel’s documentary “Virunga,” reportedly a disturbing portrayal of the crisis in and around the Congolese national park that is supposed to protect numerous endangered species. “Virunga” hasn’t screened in advance, reportedly because it contains explosive and potentially headline-grabbing revelations. Stay tuned on both of these.

Five Star and Starred Up The similar titles are accidental, but these two very different crime dramas share an acute social consciousness and a striking commitment to dramatic realism. Keith Miller, director of the no-budget festival sensation “Welcome to Pine Hill,” uses real-life gang members as actors in “Five Star,” set on the streets of Brooklyn’s East New York neighborhood. Scottish director David Mackenzie’s riveting prison drama “Starred Up” features a career-launching performance from Jack O’Connell as a violent “young offender” who winds up in the same adult prison as his hard-case dad, brilliantly played by Ben Mendelsohn.

Silenced An urgent topic, and one likely to make Obama-age liberals sing loudly and stick their fingers in their ears. A total of 11 Americans have been prosecuted as whistle-blowers under the notorious provisions of the 1917 Espionage Act – want to guess how many of those have been under Mr. Hopey-Changey? This doc from James Spione (exec-produced by Susan Sarandon) tells two of their stories.

In Your Eyes Actress Zoe Kazan describes this film as “Joss Whedon does Nicholas Sparks,” and she’s totally not kidding. Whedon wrote and produced this low-budget indie from director Brin Hill, in which Kazan plays a housewife who discovers a mysterious connection to a handsome lowlife just out of prison, played by Michael Stahl-David. Yes, I’ll go ahead and play the gratuitous snob-card: Looking forward to this more than “Avengers 2.”

Palo Alto Haters gonna hate, and when you take the combination of first-time writer-director Gia Coppola (granddaughter of Francis, niece of Sofia) and a short-story collection by James Franco – who also stars in the film as a single-dad soccer coach – there’s plenty of material. Still if there’s one thing that Franco is indisputably qualified to write about, it’s life in upscale California suburbia, and while I haven’t seen the film yet I hear Emma Roberts proves she can act for real.