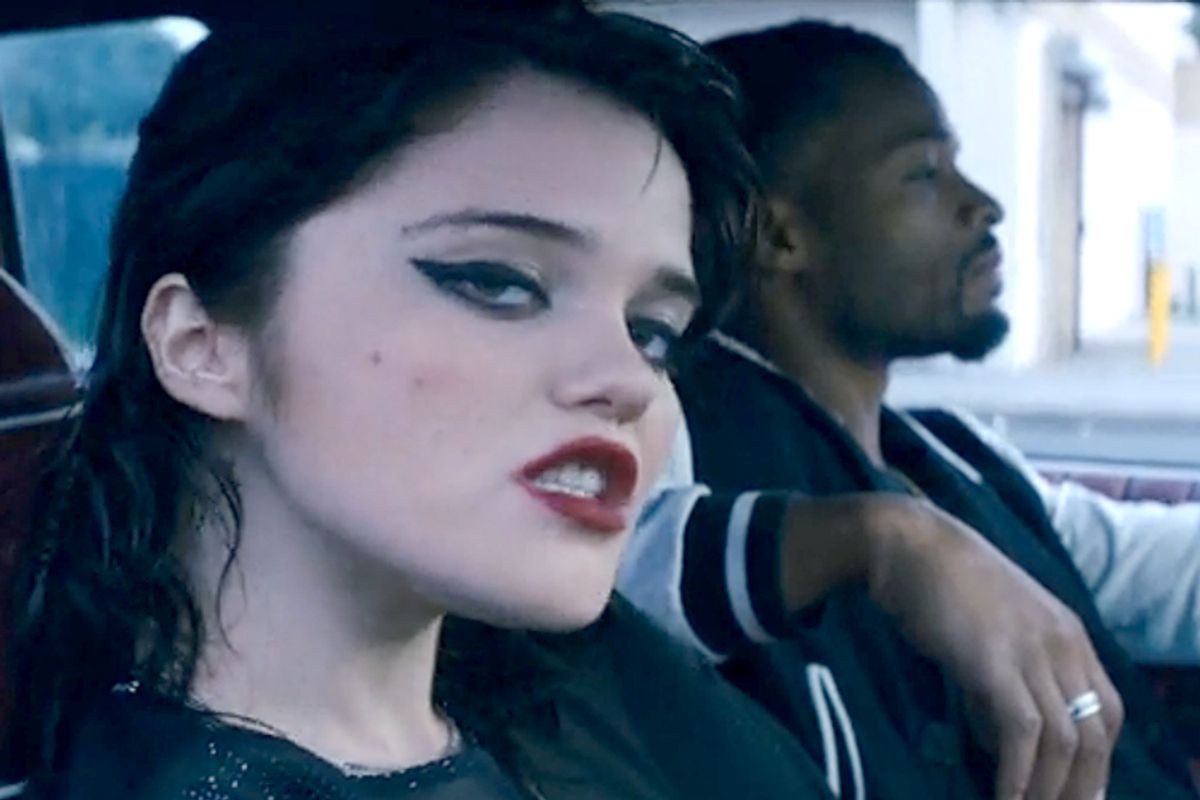 A still from Sky Ferreira's "I Blame Myself" video
--

"I don't see race as a issue," say Sky Ferreira. But don't believe her. She knows damn well it is.

The 21-year-old singer has come under fire this week for her new video for the song "I Blame Myself," with listeners charging that she's "a #racist mess." You can get where they're coming from. The video sets up an African-American gang conflict with the hooded, eyelinered and definitely fair-skinned young Ferreira as a leader, authoratively riding around Compton, getting arrested, responding to a police interrogation by grinding on the detective, unbuttoning her shirt and busting some old school dance moves -- all with a troop of black backup dancers. Racist? Debatable. Provocative? Oh sure. Writing in Flavorwire, Jillian Mapes argued that the video isn't so much about race as it is about gender, saying that it "speaks to a larger message about power and vulnerability." However you choose to look at it, though, the obvious depiction of Ferreira as "a thug" leader ranks right up there with Daenerys Targaryen's arc as pale queen of a rough, otherwise dark-skinned world. On Bustle this week, Caroline Pate said that Ferreira "takes advantage of existing racial stereotypes to project a certain image. She portrays these men as 'thugs' so that by association, she can seem just as bad, just as hard, just as tough."

If Ferreira's appropriating, she's far from alone in it. Just in the past year, Jezebel has explained to Lana Del Rey that "You Are Not a Latina Gangsta Girl, So Cut the Shit" and called out Miley Cyrus for "Accessorizing With Black People." Lily Allen has faced similar accusations of using people of color as twerking props in her clip for "Hard Out Here" – a charge she rebutted with the assertion that "If anyone thinks for a second that I requested specific ethnicities for the video, they’re wrong."

In a Facebook post Wednesday, Ferreira had a similar response, stating, "I never have and never will look at any human being as a prop…. If they were white would they be considered 'props'? I auditioned a bunch of dancers, all races & my dancers were the best ones." And, she added, "My family is Latina & Native American…. Because I have pale skin & green eyes doesn't mean I was raised in Beverly Hills and have Swedish film investor parents or whatever some have created in their minds. Would you feel more at ease if I danced with a bunch [of] blonde white boys at a mall? Should I consciously only cast white dancers for now on?"

If you're working from a place of privilege – whether that privilege is your race, your sex, your orientation, your religion – the onus is on you to try to be cool and demonstrate you're at least aware of that privilege and sensitive to it. You can't slap on an NWA T-shirt and think that you've cred. You're never going to please everybody; there will always be those who argue – as they have a perfect right to – that a white guy doing racial satire is distasteful to them or a light-skinned girl in a gang-themed music video surrounded by African-American men is insulting. It's not for anyone outside of another's experience to tell people what they can or cannot be offended by. But I give credit to Ferreira for approaching her own motivations thoughtfully and for discussing them openly. You can argue whether she pulled off what she was aiming for, but you can't say she hasn't given the matter consideration. And if an otherwise unmemorable song and video can push forward the conversation on race and appropriation, we may not ever arrive at consensus, but at least it's got people talking about a tough subject. And for that, Ferreira can take the blame -- and the credit.