Blow up the Times Op-Ed page, and start again! Why Friedman, Brooks and Dowd must go

The New York Times Op-Ed page is the best real estate in media. Why is the Times OK with it being so embarrassing? 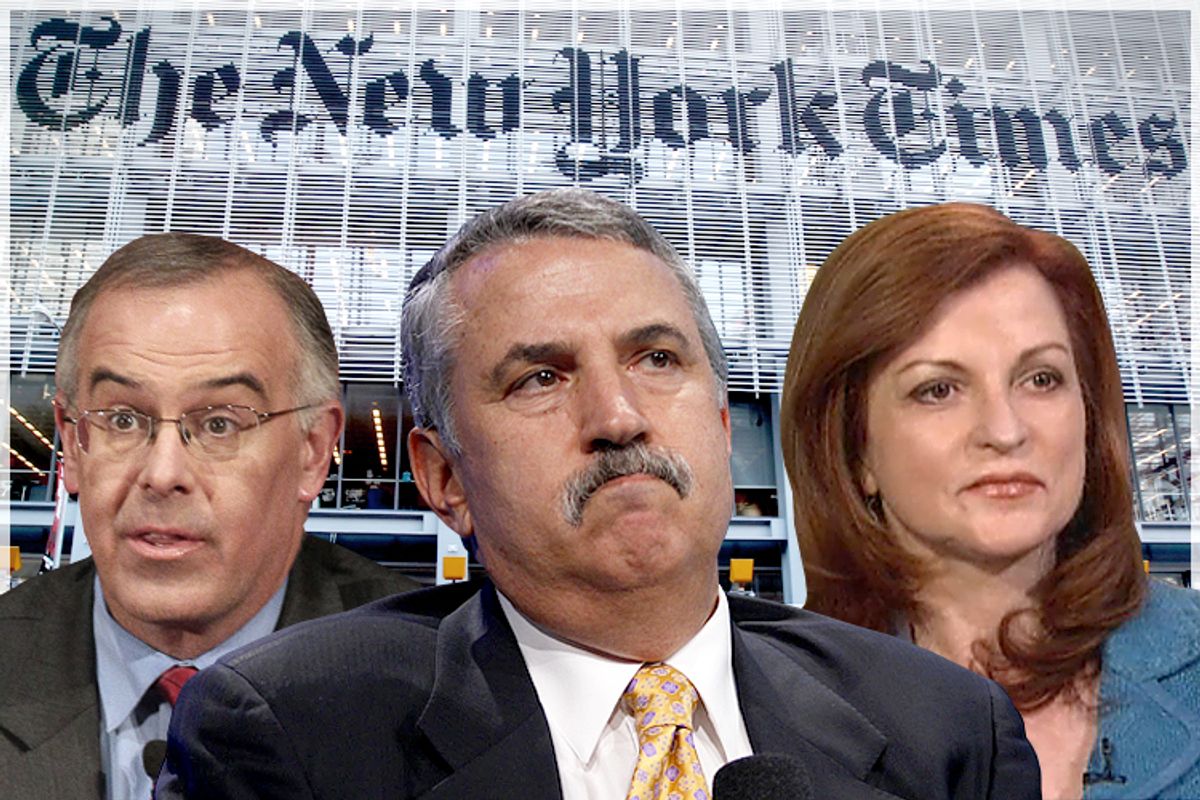 As America's newspapers shrink and die, the New York Times only grows in importance. It is effectively America's last truly national newspaper. Its coverage decisions influence the coverage decisions of every other paper and all television news broadcasts, cable and network. Politicians and executives read it. What the Times says and does frames the allowable political conversation.

Which is why it is so annoying that the Times has a terrible opinion section.

Don't get me wrong, it is not as bad at the Washington Post's opinion section, but the Times -- specifically its slate of regular columnists -- is bad. And that badness matters. The president and most of the sane members of Congress care what the Times and its opinion-makers say. The opinions of these columnists have consequences. But most of them don't write like people who ought to be entrusted with that responsibility.

What's most galling is that the Times actually does have standards. They rarely add new columnists, keeping the roster fairly exclusive. They went after Ta-Nehisi Coates, which indicates that someone over there can recognize intelligent writing. They even notoriously declined to renew Bill Kristol's contract after a year of truly awful, phoned-in work. (He went, naturally, to the Post.)

The decision to kick Kristol to the curb, again, suggests some understanding of this responsibility. But it is a blinkered one. Kristol's crimes, in addition to being a bad writer and human being, were mainly due to sloppiness. He misstated facts regularly and didn't disclose his ties to the subjects he wrote about. Do you know who else is routinely guilty of this kind of sloppiness, not to mention rote repetition of themes and jokes and incredibly lazy thinking? Op-ed superstar Maureen Dowd.

Just last year, Dowd nearly sabotaged the New York City mayoral campaign of Bill de Blasio by flagrantly misquoting the candidate's wife, Chirlane McCray. She also got the name of the diner in which she conducted the interview wrong. This wasn't one blemish on an otherwise sterling record. Dowd routinely misquotes people. Perhaps the most egregious example: In 2004, Dowd wrote that John Kerry said "who among us doesn't like NASCAR?" She used quotation marks and everything. That quote is still famous, and most people who remember it still almost certainly think Kerry said it.

Except he didn't. He said something much more boring and normal. He said: "There isn't one of us here who doesn't like NASCAR and who isn’t a fan.” That is still a dubious assertion, coming from John Kerry, but it's not the weirdo rich guy robot talk Dowd put in the mouth of a presidential candidate.

Dowd has also "inadvertently" plagiarized, something that is bound to happen eventually to a columnist who literally copies and pastes, unaltered, entire passages of text from emails from friends into "her" columns. Why is this allowed to happen? How does Dowd keep her job? Is it because her wisdom and insight are so valuable, so irreplaceable, that it's worth putting up with the occasional flagrant violation of journalistic ethics?

To answer that question, I will simply let you know that she recently wrote a column with the headline "Game of Drones," and much of this column was for some reason about a proposed sequel to the film "Top Gun." She also recently wrote that Barack Obama has "got a swag gap with Russia." (OK, just one more: "Top Democrats who used to consider Obama one cool cat now muse that he’s 'one weird cat,' as one big shot put it.")

I can at least understand Dowd's appeal and audience. I can't even imagine a devoted reader of half of the Times' stable of opinion writers.

The decision to give a column -- ostensibly a political column -- to Frank Bruni is hard to explain from the outside. Bruni spent years as the Times' chief food critic, and he was fine at it. Before that, though, he shadowed George W. Bush on the campaign trail in 2000, where he produced some of the shallowest horse-race coverage of a campaign that was full of shallow horse-race coverage. The experience later led to a book about how gosh-darn nice (and smart!) President Bush was. The book is also a tacit admission that Bruni's coverage of Bush was soft because of his personal affinity for the candidate. Al Gore, whom the press did not like, was not treated quite so kindly by Bruni.

It was probably easy for Bruni to overlook Bush's conservative politics, because Bruni appears to have absolutely no politics of his own. He barely has opinions, except about food. My friend Hamilton Nolan has dedicated himself to documenting Bruni's complete aimlessness as a columnist. Bruni will sometimes note that, say, Grover Norquist is a teensy bit of an extremist, but he is clearly more comfortable writing ambling reflections on visits to Rome and movies he saw. Have you noticed how mass culture has become fragmented because of the Internet? Frank Bruni noticed this when some young people did not know who Vanessa Redgrave is. Did you know that the Senate is dysfunctional? Frank Bruni did, and he talked to Bob Kerrey, so he should know.

Bruni the columnist makes even less sense than Bill Keller the columnist did. Keller, the former editor of the Times, recently (and thankfully) left the paper to join a journalism nonprofit, saving me the trouble of going back through his work to explain what was so bad about it.

Roger Cohen is, at least, not Richard Cohen. He is a very conventional foreign affairs-minded columnist who is notable for having most of Thomas Friedman's beliefs but (to his credit) none of his style. Twice a week he will warn that America is not exercising its power correctly in Europe, the Middle East or Russia. Or, like Friedman, he'll offer up a brief, insulting dissertation on the "Arab mind."

The former business columnist Joe Nocera is best when he sticks to business (and, sometimes, college athletics). It's unclear why anyone would seek out his take on, say, Pussy Riot.

Then there is poor David Brooks, a man who seems genuinely tired of himself and ought to have his column killed primarily to put him out of his misery. Brooks is the sort of conservative Times editors aren't embarrassed to publish, though they probably ought to be. He is devoted to furthering the notion that there is an honest and useful intellectual wing of the conservative movement, dedicated to addressing economic iniquities and so on, but he has been trying for so long to imagine a sensible Republican Party into existence that he can't still think it's going to happen soon. Lately he seems happiest writing discursive pieces on the meaning of self, which does not seem like the most optimal use of some of the most coveted media real estate in the world.

Thomas Friedman writes stupid things, for stupid people, about complicated topics. He makes everything sound simple enough for simple men to understand. He dutifully pushes a stultifyingly predictable center-right agenda, refuses to acknowledge or atone for his role in the selling of the Iraq War, and still believes that "globalization" -- a process that, conveniently, makes his richest readers richer -- will the save the world, one sweatshop at a time. Thomas Friedman is an embarrassment. (And some Times staffers, to their credit, are embarrassed.)

Ross Douthat is a thoughtful writer who usually engages sincerely with liberal ideas and thinkers -- which, you know, shouldn't be a particularly notable trait for a serious opinion writer, but this is the modern conservative movement we're talking about. Douthat's conservatism is idiosyncratic only in that it is espoused by a seemingly smart person. It is always uncomfortable to see him argue against marijuana legalization and his attempts to argue for some sort of compelling reason to oppose state recognition of same-sex marriage have not grown less lame over time. Douthat's usual approach, when it comes to matters related to his social conservatism, is to argue that society suffers when individuals are permitted too much freedom. It's a tough sell! Especially when you're demanding that women crank out babies to save Western Civilization.

Nick Kristof, the famous superhero, flies about the world rescuing women. Sometimes that rescuing takes the form of "getting women arrested for sex work," or "getting them jobs in sweatshops to produce cheap consumer goods for Americans in appalling conditions." That sort of exploitation is, to Kristof, more preferable than the other kind. His do-gooder liberalism also involves the bizarre American conviction that bombing places is a great way to help them. In a way he represents America's own delusions about its power, and the supposed beneficence with which it exercises that power, in columnist form.

These tired hacks have a near-monopoly on political opinion writing in the most important newspaper in the world. They set the boundaries of the debate among the elite, and the elite have not lately given us much reason to think that they are receiving great advice.

The result is a lineup in which Gail Collins -- Gail Collins of the mostly predictable liberal politics and breezy style -- is one of the good ones. She is, certainly, funnier than all the rest of the Times columnists (besides Friedman). There is Charles Blow, who is generally right about things, though to call his style dry is almost an understatement.

And then there is Paul Krugman, who would be the most influential columnist in the country if it weren't for the fact that elected officials routinely refuse to listen to him. Poor Paul Krugman, our Sisyphus of elite opinion, eternally doomed to the same arguments with the same people, forever.

Blow it up and start again.