"Heaven Is for Real" doesn't seem all that convinced 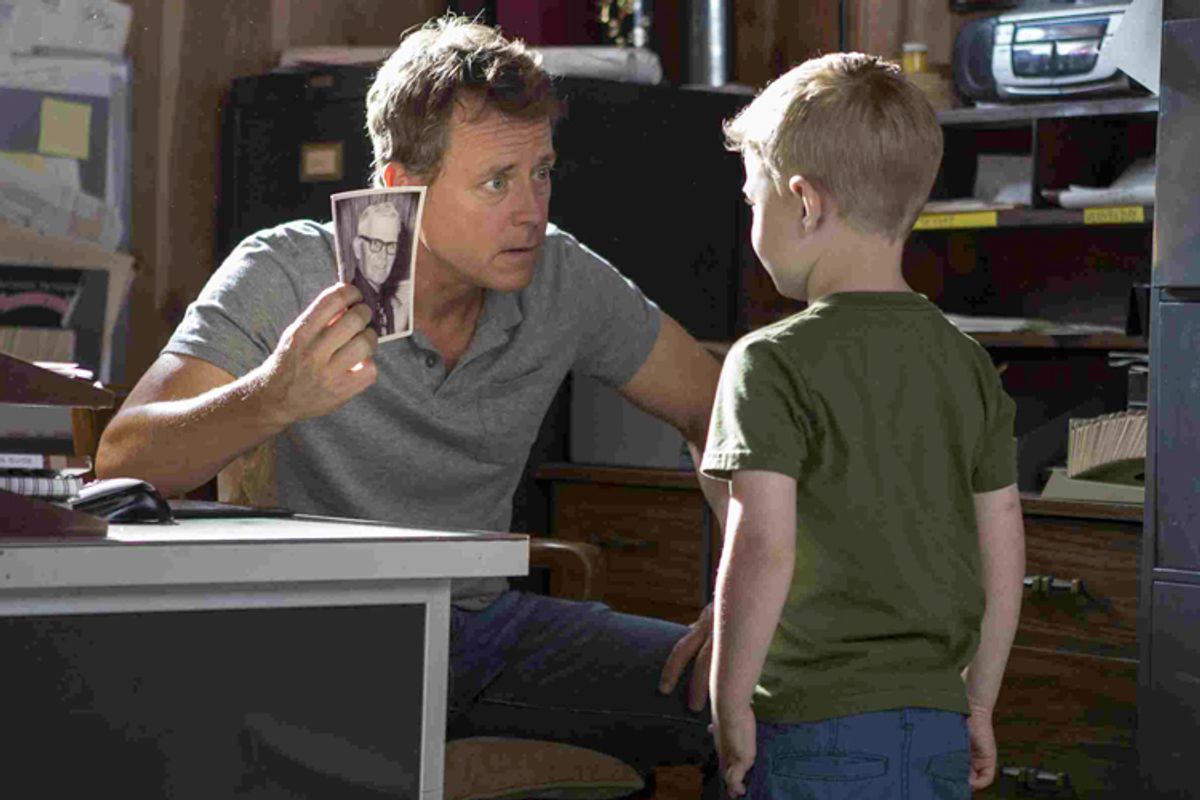 Major spoiler from “Heaven Is for Real”: Jesus looks like Bradley Cooper in “American Hustle,” or like Rod Stewart with a beard. He could be Jewish, but we’re talking Jewish in a prep-school drug-dealer vein more than the first-century Palestinian periphery of the Roman Empire. But let me stop you right there, before we slide further down the well-worn path to easy ridicule. This movie is bizarre, conflicted, unintentionally hilarious and profoundly mediocre – something like one of those based-on-a-true-story demonic possession yarns, with its polarities reversed – but not stupid in the way you’re probably thinking. Even its depiction of a blue-eyed, bathrobe-wearing Savior comes with a surprising degree of psychological uncertainty, or even epistemological hedge. This is a big-tent Christian film that wriggles around a lot seeking to accommodate multiple varieties of religious experience, and ends up terminally infected with the virus of postmodern relativism. Is heaven indeed for real? Um, sure. Maybe! As a purportedly devout public figure put it some years ago, it depends what the meaning of “is” is.

In the first scene of “Heaven Is for Real,” Greg Kinnear states the problem in voice-over: Is heaven “just a hope,” or a place as real as the earth where we live out our pre-heavenly lives? This is clearly meant to recall the words of the Church of England’s 1559 Book of Common Prayer, quoted or paraphrased to this day by almost every Protestant minister who commits a dead person to the earth while invoking “the sure and certain hope of the Resurrection to eternal life, through our Lord Jesus Christ.” I sat in a freezing country churchyard a few weeks ago and listened to a Southern Baptist preacher, several degrees of dissent removed from Anglican orthodoxy, say those very words. (While the Roman Catholic Church of my own forefathers does not use that language, the sentiment invoked is much the same.)

But what those words mean to believers is by no means clear, obvious or uniform. How do Christians make sense of the conflicted phrase “sure and certain hope,” and how literally do they take the notions of bodily resurrection and eternal life? Todd Burpo, the real-life Nebraska clergyman who wrote the pop-religion bestseller “Heaven Is for Real” and is played by Kinnear in the movie, may not exactly be Thomas Aquinas, but he clearly understands that centuries of theological turmoil ride along with these questions. The only correct answer is that there is no one correct answer, a fact that many of the Manichaean and simplistic debates about the role of religion in American society overlook or ignore.

Some contemporary atheists (although certainly not all) seek to boil down religious belief to a capricious narrative of salvation and damnation, in which I will live forever at the right hand of the Lord while you burn in a lake of fire. That strain of faith certainly plays a charismatic role in American religious discourse, but very few people live their lives as if they were fully convinced by it. Even the success of “Heaven Is for Real,” a work that despite its declarative title strives to encompass every degree of belief and agnosticism, testifies to a hunger for conviction in a landscape of doubt. Some people who call themselves Christians possess an atheistic optimism about some mystical future communion with the universe, while others have a highly specific vision of the afterlife that involves physical reunion with great-aunts and pet hamsters. Just as fundamentalist Christians who claim to see the Bible as inerrant divine truth actually pick and choose which verses to focus on and which to ignore, I suspect that people who say they believe in a literal heaven have extremely different ideas about what that actually means.

In director Randall Wallace’s adaptation of the Burpo family’s saga (he co-wrote the screenplay with Chris Parker), the tale of 4-year-old Colton Burpo’s visit to heaven plays out almost like a shaggy-dog story or one of Sherlock Holmes’ adventures, deconstructing itself as it goes along. “Heaven Is for Real” is almost disconcertingly eager to supply possible rational-world explanations for Colton’s visions of Jesus on horseback, a choir of angels and a stillborn sister he never knew about. (She has grown to the age of 6 or so and donned a prim pink dress, but who can say how these things work?) Colton is a bright and suggestible child from a deeply religious family, who returns from a grave illness and emergency surgery – but not really a “near-death experience” in the usual sense – with a mixture of imbibed spiritual imagery, details gathered from his domestic life and pure imagination. When Todd spins the tale for a university psychologist, she politely shoos him away: Kids observe a lot more than we think, and they make up stories meant to satisfy adult needs. End of story.

“Heaven Is for Real” has exactly the same structure as one of those family horror movies about a weird kid who is possessed by diabolical forces and gradually reveals depths of disturbing secret knowledge. Only here the cheerful music, sunny cinematography, and people who smile all the time are meant to convince us the supernatural events are not sinister. (In fairness, when sad things happen the people in the movie look sad, albeit briefly.) Wallace, who directed the crypto-right-wing “Secretariat” and wrote the Oscar-nominated screenplay for “Braveheart,” is an interesting case, as one of the few Hollywood insiders who’s also a Christian conservative. I wish he were a more interesting filmmaker. The cast of “Heaven Is for Real” has apparently been instructed to beam their emotions at us, and each other, in halogen-headlight style, with no hint of ambiguity or inner conflict. Every minor witticism is received with joy; every conversation at the diner or the bank is imbued with the inexpressible love of God and humanity. That gets old really fast, and after half an hour I hungered to find wherever the Coors-drinking degenerates and meth-cooking rednecks were hiding in this idyllic, softball-playing prairie wasteland.

Of course we never encounter any signs of social disorder or dysfunction in the Burpos’ achingly wholesome community, with its one achingly wholesome black family (consigned to the background) and its even more achingly wholesome Latino family. This portrayal of the mythological heartland, aimed at moviegoers in suburban multiplexes surrounded by strangled traffic and acres of parking lots, feels more desperate than reassuring: Not only is there life after death, there is also an earthly paradise out in some pancake-flat red state you’ll never visit, where neighbors help neighbors, women sing hymns on Sunday and nobody gets their house repossessed or sits around for 16 hours smoking weed and playing World of Warcraft. The pace of change in Imperial, Neb., has been modulated, it appears, by the intensely boring basic goodness of America. The Burpo kids know “We Will Rock You” but not Snoop Dogg; adult viewers will pick up on the faint suggestion that Todd and his wife Sonja (Kelly Reilly) may go a bit beyond vanilla behind closed doors. But the world of “Heaven Is for Real” is nostalgia for nostalgia, like an attempt to recapture the magic of Ronald Reagan’s “Morning in America” commercial, which itself promised a return to something that never existed.

All the anxiety and disorder that is suppressed at the surface of “Heaven Is for Real” bubbles up in Todd Burpo’s Job-like or Christ-like spiritual struggle, as he tries to figure out how to make sense, personally and theologically, of his son’s incoherent visitation with blue-eyed Jesus. It’s worth noting that the real Todd Burpo is a minister in the Wesleyan Church, an evangelical or “holiness” offshoot of Methodism that does not fit easily into narratives about liberal vs. conservative Christianity. While Wesleyans assert “Biblical infallibility,” they don’t mean the same thing by that phrase as most modern-day fundamentalists do. Wesleyans were abolitionists and supporters of women’s rights in the 19th century; the legendary Seneca Falls Convention of 1848 was hosted by a Wesleyan chapel. They’re a Trinitarian, anti-Calvinist denomination whose doctrines are big on free will and moral responsibility, not young-earthers or born-agains or gay-haters. In theological terms, the Wesleyans are “post-millennial,” meaning that the focus is on the idea that Christ already came once and offered us salvation, rather than on the “pre-millennial” obsessions of many other evangelicals: The Second Coming, the Rapture, the Number of the Beast and so on.

By flirting with the idea that his toddler son had a “real” vision of heaven, and then by finessing the question of what that means, Burpo ventures pretty far from Wesleyan doctrinal caution. He’s trying to inject a little pre-millennial or pseudo-fundamentalist fervor into the desiccated terrain of post-millennial Protestant theology, which has been overwhelmed by the Bible-thumpers on one hand and by the secular forces of late capitalism on the other. On the right wing, he tries to open the tent to true believers: Hey, a girl in Lithuania met the same blue-eyed Jesus, and it’s on YouTube. Heaven -- total science! On the left, he beckons to bewildered Information Age agnostics: Well, it was real to Colton, and who am I to say? How do we even know what “real” is, anyway? Maybe it’s a metaphor about how we should live our lives on earth and stuff!

In Kinnear’s compassionate performance, Burpo’s attempt to extract profound truths from a little kid’s dreams or hallucinations is pathetic and almost endearing, and thoroughly undermines itself with all its nervous switchbacks and asterisks and parentheses. American liberals love nothing better than to thrill at the blend of theocratic nightmare and idiotic superstition that prevails in flyover country, but I can find no basis for skin-crawling terror or smug superiority in “Heaven Is for Real.” Todd Burpo’s earnest search for meaning is not that different from yours or mine, and his story demonstrates how far the pillars of certainty that once undergirded American life have been chewed away. Is heaven anything more than a collective delusion that helps us cope with a screwed-up world? Maybe not. Is democracy?