If collective bargaining were required, would negative consequences ensue? Northwestern's answer may surprise you 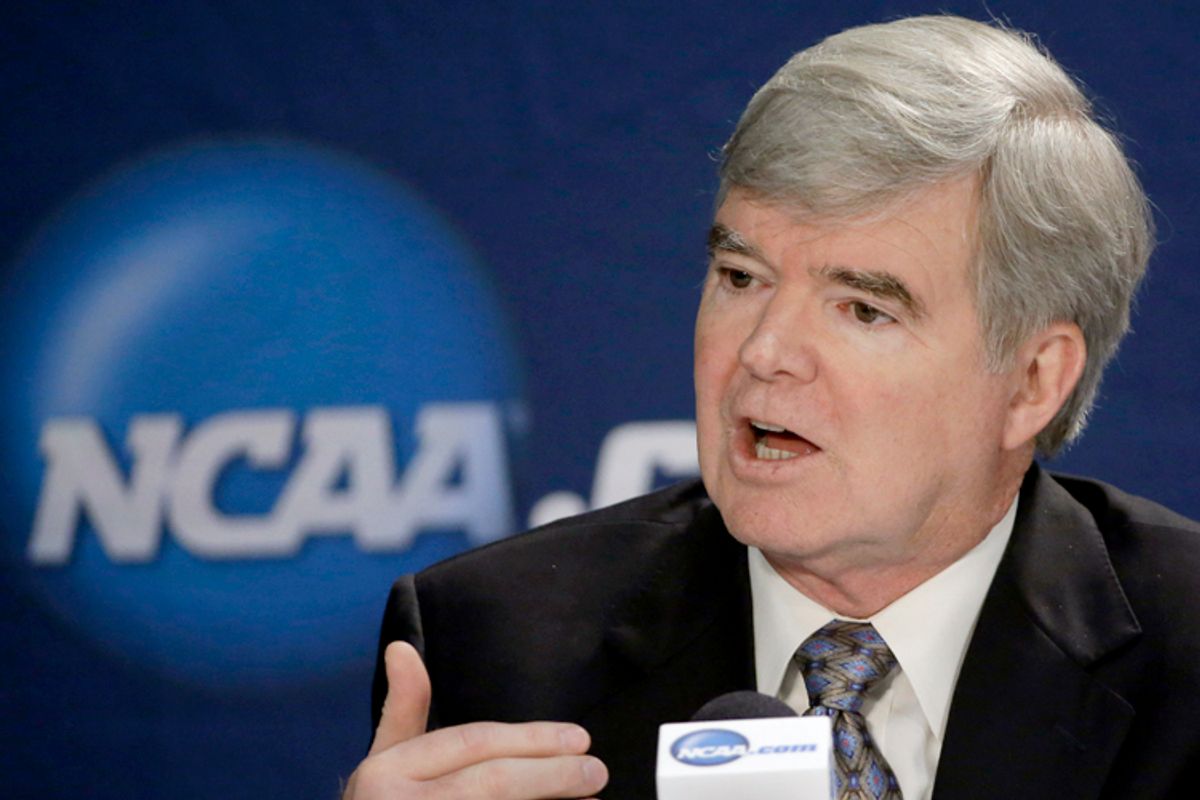 In an election without precedent in college sports history, Northwestern football players will vote today on whether to become union members. But resistance from the university could keep those ballots from ever being counted – or drag the case all the way to the Supreme Court.

As I’ve reported, college athletes have taken sporadic stabs at NCAA overhaul for decades, including an audacious but abortive mid-‘90s attempt to halt March Madness with a strike; a petition circulated on several campuses; and a rare, if subtle, nationally televised act of protest last September, when 28 players took to the field with the initials APU – “All Players United” – affixed to their bodies.

“We’ve appealed to lawmakers, and we got a few laws passed; you know, we’ve talked to Congress, we’ve helped on lawsuits, we’ve put together intense public pressure campaigns,” ex-linebacker Ramogi Huma, a founder of the non-union National College Players Association as well as the fledgling union College Athletes Players Association, told Salon after filing the first-of-its-kind unionization petition with the NLRB in January. “But it’s clear, you know, in a multibillion-dollar sports business, for players to have protections, that the answer is to form a labor organization so that the player can collectively bargain for things on a comprehensive level.”

The union effort has provoked predictable push-back. In a statement following the CAPA petition, NCAA chief legal officer Donald Remy decried a “union-backed attempt to turn student-athletes into employees,” saying it “undermines the purpose of college: an education.” “It’s not like we’re little kids anymore,” Colter countered. “We’re young men who give a lot … and we should have a voice in all this.” He argued that Northwestern football players are compensated through scholarships, put in as many as 60 hours a week of work, are controlled by coaches and administrators, and are subjected to rules governing their weight, grades and tweets.

But the university argued before the NLRB that its “student-athletes,” the vast majority of whom CAPA says signed its petition, were in fact not employees under the New Deal National Labor Relations Act, and were thus ineligible to win collective bargaining rights. In a March ruling, the Chicago NLRB sided with the players, paving the way for today’s voting. But today’s ballots will be impounded pending a review of the decision (requested by Northwestern) by presidentially appointed members of the national NLRB. “I think they will be sympathetic to the arguments” in the pro-union Chicago ruling, predicted Liebman, though she suggested her former colleagues would have to contend more directly with whether affirming employee status for college athletes would necessitate overturning a 2004 ruling denying it to graduate students.

Even if the NLRB upholds the Chicago ruling, and even if the union turns out to have won the election, Northwestern’s Cubbage told Salon the university would plan to take the legal battle to federal court -- and if necessary to the Supreme Court -- rather than comply with an order to start collectively bargaining. (A pro-union NLRB ruling could also draw further fire from congressional Republicans, who demanded its documents, attacked its funding, and aimed to curtail its authority amid a 2011 investigation into alleged intimidation by politically connected aerospace giant Boeing.)

But Northwestern hopes to deal the union an outright defeat today, eliciting enough “no” votes that if those ballots are ever counted, CAPA will come up short. To accomplish that goal, the New York Times reported Wednesday that Northwestern officials “have pulled out all the stops to squash the union before it is formed,” including celebrity coach Pat Fitzgerald meeting one-on-one with players, holding mandatory meetings with scholarship players, and writing to parents as well as players. “Players have heard warnings that the formation of a union would make it harder for them to land jobs after graduation; that Fitzgerald might leave; that alumni donations would dry up; that Northwestern’s planned $225 million athletic center could be scrapped,” reported the Times’ Ben Strauss. “The women’s fencing coach told his team that a union could put the future of fencing in jeopardy, though he later apologized.”

“Northwestern University has put tremendous pressure on its players to vote against their best interests,” CAPA’s Huma told Salon in a Thursday email, “but we remain hopeful that the majority of players will follow their beliefs and vote YES.”

While U.S. labor law grants companies broad discretion to campaign against unionization, compel employees to attend anti-union meetings, and make dire predictions, ex-NLRB chair Liebman told Salon the published reports suggested “there would be probably adequate grounds” for the union to file charges against Northwestern, in the event of a defeat, arguing the university had violated the bans on making threats against voting “yes,” or promising benefits for voting “no.” Northwestern’s Cubbage told Salon the university had “followed [NLRB] procedures and all of the rules.”

The university vice president defended Northwestern’s outreach to parents on the grounds that “we are communicating with the interested audiences, and for many students, the advice of their parents is something that they seek.” Asked about mandatory meetings, he said, “I’m not sure that’s accurate … I don’t know that’s the case but I don’t know that for sure.” (Asked whether the university had asked the Times to correct any of the reporting in its Wednesday story, Cubbage said, “not to my knowledge.”) Asked whether athletes should have a choice as to whether to attend a meeting devoted to campaigning against the union, he answered, “I don’t know the answer to that question.”

Cubbage said the NCAA was playing no role in Northwestern’s response to the union campaign; he declined to comment on whether the NCAA was currently looking out for the best interests of student-athletes. (The NCAA did not respond to a Thursday inquiry.)

Asked repeatedly to identify the negative consequences that Northwestern believed would ensue if it were required to bargain collectively with football players, Cubbage said he was “not very good on hypotheticals”; that any “changes needed” in college sports could not be achieved through collective bargaining with the university; and that such bargaining “changes the relationship, from one of a student relationship to an employee relationship. And as an academic institution, we believe that the appropriate relationship is that of an academic institution and student.”

Asked what concretely would be worse under an “employee relationship,” Cubbage answered only, “Again, we believe that they are students. It would change it from an academic relationship to an employee-employer relationship.”