Galloping guacamole! The Amazing Spider-Man thwarts an evil alien who is lying to teens about sex 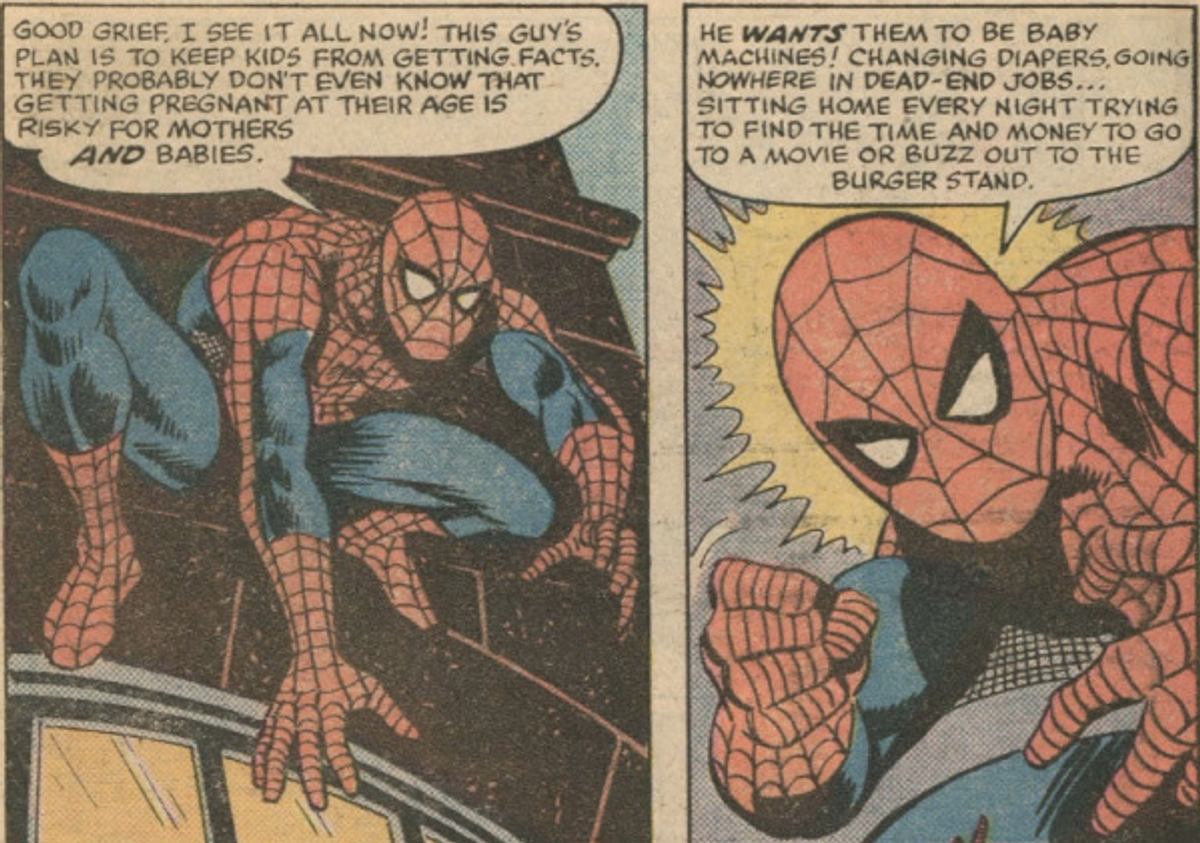 (The Amazing Spiderman vs. the Prodigy)
--

Marvel Comics and Planned Parenthood teamed up in 1976 to make a comic promoting safe sex, and it's kind of amazing.

Here's the story in a nutshell: The Amazing Spider-Man discovers that the alien villain the Prodigy is using his sinister power of vocal persuasion to convince teenagers to have unprotected sex as part of a "giant baby snatch" plot to abduct children to use as laborers on his home planet, Intellectia. The Prodigy tells a roomful of high school students to have lots of unprotected sex because, he says, the people telling them to use contraception or wait until they're ready are total norms. (The Prodigy establishes his status as a not-norm by wearing platform boots and an emerald leisure suit.)

A panel showing the Prodigy reflecting on his plan to give teens lots of misinformation about sex and contraception is basically what you imagine every pro-abstinence lawmaker tells himself in the bathroom before he goes out and makes a big speech about why sex education shouldn't be taught in public schools. "My mind-bending has worked. They won't learn anything about anything here," says the Prodigy. "They can't think straight, and my lies will lead them to make stupid mistakes." (It is actually terrible that this pretend space villain might as well be scripting the majority Republican opinion on Planned Parenthood and sex education, but let's move on.)

Just as the Prodigy is about to take his message to the masses, Spider-Man swoops in and -- after making a series of puns -- defeats him. He says things like, "Galloping guacamole! This is bigger than I thought! That dastardly dude's got a national scheme in the works to rip off young people!"

The existence of this comic is kind of mind-blowing.

But it is my sacred duty as a humorless feminist to point out here that the comic -- while obviously well intentioned and important -- is a product of its time. It's pretty amazing that the Marvel team and Stan Lee agreed to team up with Planned Parenthood to talk about contraception and sexual health, but the comic presents this information with a pretty heavy dose of stigma against teen pregnancy and teen parents. (You can totally promote safe sex and encourage teens to make informed choices about planning for the families they want without shitting all over teen parents and pretending that their lives are automatically going to be terrible if they have children while they're still young. This is an actual thing that is possible, and it's something we are slowly getting better at.)

There's also some funny business at the end about "homosexuality" that set off my "oh weird this is stigmatizing" Spidey sense.

But it's still a neat thing to see Spider-Man going to bat for Planned Parenthood. He may actually need to jump back into the movement since not nearly enough has changed since 1976, and there are hundreds of the Prodigy's ideological brethren making our laws right now.

(A selection of choice pages below, you can read the full thing at Retronaut.)