One percent's anti-Piketty scheme: Its insane new plan to boost the rich (and raid the poor)

Just as the nation rallies behind the fight against inequality, Wall Street wants to pull off this audacious heist 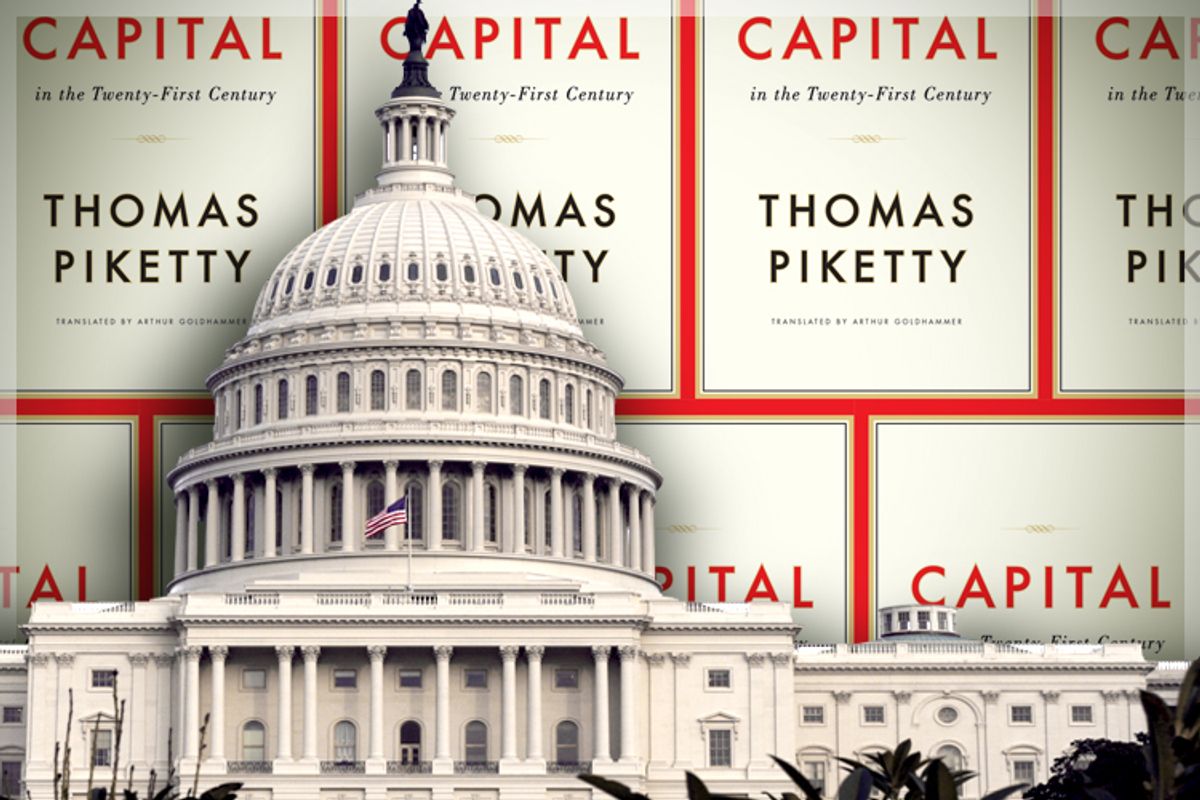 It may not last, but for one brief moment yesterday, the country dodged a huge bullet. Members of both parties, and the entire White House economic team, have wanted for years to deliver a startling wealth transfer from the public to Wall Street, one that will almost certainly trigger homeowner abuse while making the largest financial institutions wildly rich. In other words, some of the same politicians who pay lip service to Thomas Piketty and the fight against rampant socioeconomic inequality wanted to pull off the greatest heist for the rich at the expense of the poor in decades. But at the last minute, they couldn’t get the support they needed in the Senate Banking Committee.

The legislation in question, written by Banking Committee chair Tim Johnson (D) and ranking member Mike Crapo (R), would eliminate Fannie Mae and Freddie Mac, companies currently under a government conservatorship, which package and sell securities backed by residential mortgages. Instead, Johnson-Crapo would have private financial institutions issue their own mortgage-backed securities, and give them government insurance against losses. To understand the insanity of this notion, you have to remember why we had a financial crisis.

Fannie and Freddie didn’t cause the crisis. They were late to the party, in fact, only dipping into subprime mortgages once they lost market share. Private banks fueled the housing bubble by demanding more and more subprime loans to purchase and package. This degraded lending standards, as anyone with a pulse could get a mortgage. Banks knew the loans were garbage, but built the securities anyway, and sold them all over the world to investors who were lied to about their quality. When the music stopped, losses on the private securities triggered the meltdown.

In a collective bout of amnesia, Washington lawmakers believe the antidote to this is to let the same private banks that caused the crisis dominate mortgage securitization all over again, by eliminating their biggest competition. Not only that, it would give Wall Street a government guarantee for this privilege. Under Johnson-Crapo, a new public entity called the Federal Mortgage Insurance Corp. would insure catastrophic losses on the securities. Investors would have to take a 10 percent first-loss position, with the government picking up the rest. This means that the private sector would take 10 percent of the risk and collect all the profits, while the government would take 90 percent of the risk and collect none of the profits.

Nobody can articulate what problem this would actually solve, other than murmurs about how this is “unfinished business” from the financial crisis. If Wall Street banks wanted to issue mortgage-backed securities right now, no laws stop them from doing it. They don’t because, as former congressman Brad Miller points out, investors wouldn’t touch them, remembering all too well the massive abuses that resulted the first time, many of which are still being litigated. All Johnson-Crapo would do is eliminate Wall Street’s competition, allowing them to corner a lucrative market while only carrying a sliver of the risk.

During their conservatorship, Fannie and Freddie have had the secondary mortgage market to themselves, operating effectively as public companies providing a public service of making mortgages more available. Actually, they’ve gone back in time, when Fannie Mae was a fully public company from 1938 to 1968, a period of economic expansion and rising homeownership. Through issuing securities on over 60 percent of new mortgages, Fannie and Freddie have paid back the government in full for their $188 billion bailout. Meanwhile, mortgages generated over the past year have performed the best on record.

More important, bad actors in the system have gradually been weeded out. Under the Suspended Counterparty Program, Fannie and Freddie must stop doing business with any service provider – a mortgage servicer, law firm, property preservation specialist, etc. – whom they suspect of fraud. For example, Fannie Mae recently stopped doing business with two “foreclosure mill” law firms in Colorado, who had a habit of charging 12 times the cost to post notices of default on homeowners’ doors, and then persuaded the state Legislature to require a second notice to be posted.

Private banks running the secondary mortgage market would have no incentive to protect the public, and such scams will run rampant. Moreover, since banks would hold a government guarantee on mortgage-backed securities, they would have every incentive to fill them with the same kind of crappy loans that proliferated during the crisis. Under the bill, banks issuing securities would have no duty to act in the best interest of investors, much less homeowners. And even supporters of Johnson-Crapo acknowledge that it will raise mortgage interest rates anywhere from 0.5-2.0 percent, making housing even less affordable than it is today.

Boosters of this idea, which include the entire White House economic team, make the argument that only a government guarantee can bring private capital back to the mortgage market, but also that no government money could possibly get used under this system, since a 10 percent loss was twice as much as Fannie and Freddie lost in the aftermath of the crisis. This is actually a half-truth: Fannie and Freddie didn’t control the entire mortgage market, which lost much more in housing wealth during the meltdown, by a factor of trillions of dollars. But supporters of Johnson-Crapo should answer this question: If government money will never get put to use, why do you need the guarantee at all? Is it just to goose Wall Street profits?

Fortunately, some champions for the public – and a couple of greedy hedge funds – have frozen Johnson-Crapo in place. Days before the scheduled markup in the Senate Banking Committee, Democratic Sen. Sherrod Brown released a series of amendments, including some with Republican David Vitter. These amendments sought to strengthen the bill, by protecting borrowers from abusive fees, stopping mortgage servicers from having a financial interest in foreclosing, and limiting market concentration. This was a subtle signal of dissent among liberals on the Banking Committee for just returning to the Wild West show that was mortgage securitization in the housing bubble years.

At the same time, House Republicans see the government guarantee as a permanent bailout (it’s hard to actually argue with this) and put forward their own legislation for a fully private market (it’s easy to argue with that unrealistic solution). Meanwhile, conservatives have rallied around a group of potential campaign contributors ... I mean a group of hedge fund shareholders ... who purchased Fannie and Freddie stock and want the government to buy back their shares. So while support for Johnson-Crapo is bipartisan, so is the opposition, albeit for vastly different reasons.

Johnson and Crapo need massive support – at least 16 of the 22 votes on the Banking Committee – to pressure Harry Reid to schedule a Senate vote on the bill. But six liberal holdouts who have not affirmed their support clearly would not go along with the program. At yesterday’s scheduled markup, Johnson announced a delay. “While we have the votes to report out the bill today,” Johnson said, “we will continue working with interested members of both parties.” No date was set for when the markup would resume.

This really does damage the prospects for Johnson-Crapo. Supporters clearly wanted to show some forward momentum for the bill with a bipartisan vote, proving that “everybody” agrees on the eventual outcome. Despite a full-court press from the White House, however, not everybody agrees. A few brave souls still look at bringing back the exact same operators to run the exact same scam that blew open a hole in the economy we still haven’t climbed out from, and think that’s maybe not such an awesome idea.

Those in Washington who want to privatize Fannie and Freddie will return, of course, so it’s critical to pay attention to this debate. The nation survived without private mortgage securitization for decades without a problem. Let’s hope we can keep it that way.