Why is the media ignoring 200 missing girls?

Two weeks after a mass abduction, the American news still has little to say 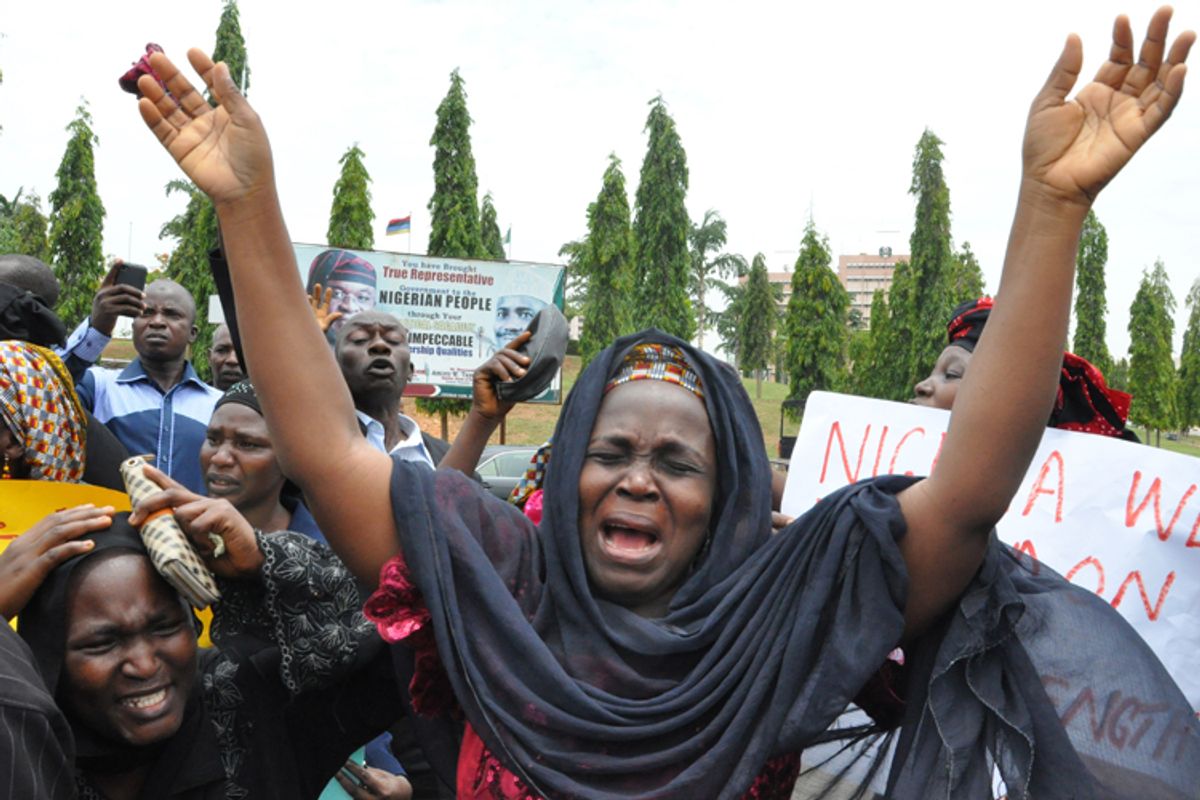 An unidentified mother at a demonstration with others who have daughters among the kidnapped school girls of government secondary school Chibok, Tuesday April 29, 2014, in Abuja, Nigeria. (AP/Gbemiga Olamikan)
--

Somewhere in the crush this year of front page international stories featuring large numbers of victims – the Korean ferry disaster, the Malaysia Airlines disappearance – a mass abduction of more than 200 girls earlier this month has somehow garnered considerably less media attention. Where are the girls now? And does the rest of the world care about their fate?

It's been two weeks since 234 Nigerian girls were abducted, allegedly by the militant Islamist group Boko Haram, from the Government Girls Secondary School in the Sambisa Forest. The Borno state schools closed three weeks ago because of what the Guardian describes as "an increasing number of attacks by militants who have killed hundreds of students in the past year," but the girls had been called back to do a physics exam. On April 14, their kidnappers broke into the school, killed two guards, and loaded the girls into trucks and drove off. Between 30 and 50 girls are believed to have escaped. The rest of the girls, mostly aged between 16 and 18, remain missing.

Last week, some of kidnapped girls' parents came forward to say that Boko Haram, whose name means "Western education is a sin" or "Western education is forbidden," have threatened to kill them and their daughters. Reports from the Borno-Yobe People's Forum say that villagers in the Sambisa Forest have claimed the girls are being taken across the country's borders and sold into marriage to Boko Haram militants for the U.S. equivalent of $12. On Wednesday, hundreds of demonstrators, mostly female, marched through the rain to protest what they say has been a lack of action on the part of the Nigerian government to find and return the girls. Organizer Hadiza Bala Usman expressed her exasperation to the BBC, saying, "It is not clear why the rescue operation is not making headway considering the fact that there's a clear idea of the perimeter area where these kids were taken in the first week: to the Sambisa forest."

But it's not just the Nigerian government that seems unmoved to action. If you were to look at the front pages of your preferred American news sites over the past 14 days, or to tune in to your favored news broadcasts, you'd likely have seen only passing reference to the story, or none at all. Over 200 teenage girls – stolen, believed sold and raped – and  yet the New York Times has devoted minimal attention to it. CNN and the L.A. Times have barely mentioned it in the past week.

In the endless cycle of news, a torrent of ideas and issues are coming at us all the time. I don't begrudge anybody that "Star Wars" and Donald Sterling are the current top stories on CNN. I write about entertainment and get regularly mocked for it not being about Syria. There's room in our mainstream media for George Clooney and botched executions and Alabama floods. Nor would I prefer this tale to receive the kind of round-the-clock useless punditry that characterizes so many big "developing" stories.

But when you have a story of this magnitude, a story that's still going on and that rightly tears at the heart of anyone who cares about the fate of girls in the world, it's puzzling why it's attracted such comparatively little attention. Is it because it's too remote, too rural, simply too hard for Westerners to relate to? Is it because the story of girls being taken and peddled to men is so commonplace – across the world, one girl under the age of 18 is married every two seconds -- that even a mass abduction is somehow not considered sufficiently dramatic? Or is it that the story languishes because of our collective short attention span, that bit of resistance that questions whether to invest in an item that's more complex than a natural disaster? Is it that one missing girl is "every parent's nightmare" but 200 is an abstraction, a number too surreal to fathom? Maybe it's all of that. Maybe it's just that what goes on in a corner of Nigeria, however horrendous, doesn’t just make for sufficient page views and ratings. I wish I understood.

Giving more attention to the Nigerian abductions won't bring those girls back. But it may put more pressure on the government to increase its efforts to find them. And it would send the message to the people who are frantic over the loss of their sisters and daughters and neighbors that they are not alone in their anger and pain. It would say to Musa Muka, who has not seen her 17-year-old daughter in two weeks, that we hear you when you say, "She is a good girl." It would say, we see you, girls of Chibok. You are not ignored and you are not forgotten, and we care about what happened to you.