In a revealing story for Vanity Fair, she reinvents herself as the first lady of Internet shaming 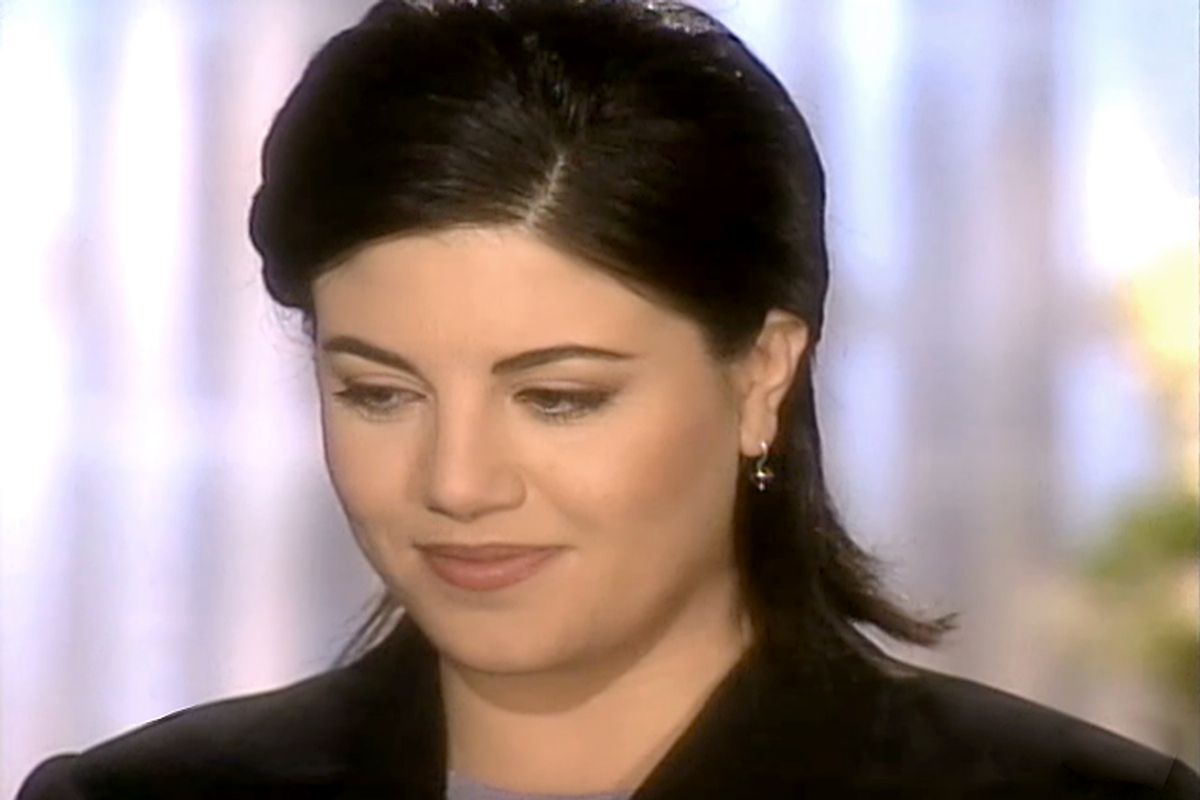 Monica Lewinsky is almost 41 years old now. The political scandal that made her a household name and for a time seemed it would topple a president is in the distant past. She has for the past decade – after halting attempts at handbag designing and dating competition hosting – stayed out of the limelight, seemingly content to become an answer to nineties-themed trivia questions. But now she's got one more thing to say. In an essay for Vanity Fair that was previewed Tuesday and comes out in full Thursday, the woman who made berets and blue dresses notorious wants to set the record straight on a few things – and to offer a message of hope to everyone who's been similarly trolled in her wake.

Lewinsky is clear on her past and her part in her own story. "I, myself, deeply regret what happened between me and President Clinton," she says, and then says it some more. "Let me say it again: I. Myself. Deeply. Regret. What. Happened." She depicts herself as not a victim but a pawn, noting, "Sure, my boss took advantage of me, but I will always remain firm on this point: it was a consensual relationship. Any ‘abuse’ came in the aftermath, when I was made a scapegoat in order to protect his powerful position… The Clinton administration, the special prosecutor’s minions, the political operatives on both sides of the aisle, and the media were able to brand me. And that brand stuck, in part because it was imbued with power."

It's a brand she still wears today. She speaks of interviewing for jobs she was "never 'quite right' for" and getting name-checked in the recent song "Partition" – although she adds, "Thanks, Beyoncé, but if we’re verbing, I think you meant 'Bill Clinton'd all on my gown,' not 'Monica Lewinsky'd.'" She is forever defined by the sexual choices she made as a young woman in her twenties, choices that involved one of the most powerful men in the world but were not terribly different from the kind of exploration and mistake-making and trusting the wrong people that lots of people make at that age. And that's what she wants to talk about.

Today, she recalls how back in 1998 she was the most humiliated person in the world, and that "Thanks to the Drudge Report, I was also possibly the first person whose global humiliation was driven by the Internet." Since then, though, her club has expanded exponentially. Lewisnky's place in history may remain unique, but public shaming is bigger than ever. Not an hour in the media -- or a moment on YouTube -- goes by without someone being derided in deep detail. When social media is used to call out racism or hypocrisy it can be a force for positive change. Often, however, it's used  to bully and shame, with disastrous consequences. It's used to threaten and intimidate and take people down, for expressing an opinion or being caught in an embarrassing moment, or, frequently, for being a female and being caught having had a sex life in any way.

Lewinsky says that after the suicide of gay Rutgers student Tyler Clementi in 2010, she was tearful but her mother was even more deeply affected. "She was reliving 1998, when she wouldn’t let me out of her sight," she writes. "She was replaying those weeks when she stayed by my bed, night after night, because I, too, was suicidal. The shame, the scorn, and the fear that had been thrown at her daughter left her afraid that I would take my own life — a fear that I would be literally humiliated to death." After Clementi's death, she says, "My own suffering took on a different meaning. Perhaps by sharing my story, I reasoned, I might be able to help others in their darkest moments of humiliation. The question became: How do I find and give a purpose to my past?" She now hopes to "get involved with efforts on behalf of victims of online humiliation and harassment and to start speaking on this topic in public forums."

After all this time, Lewinsky appears to still be grappling with how to incorporate her very unusual and far-from-flattering fame into the rest of her life. The Vanity Fair piece is an obviously calculated step, testing the waters of reinvention as the elder stateswoman of embarrassment, the grand dame of the slut-shamed. Maybe it'll stick; maybe not. Plenty of people would prefer to regard her solely as the girl in the stained dress. But the ranks of the humiliated and nitpicked get bigger every day. And 16 years on, the woman who ushered in the new age of public mortification seems ready to not escape from her past but embrace it – and perhaps in the process make it a little easier for a whole new generation to face the tireless Drudges and the trolls. She gets its, she's saying. Or to paraphrase the man she once interned for, she feels your pain.