Worst "Slate pitch" ever? Why there's nothing "ugly" about a $15 minimum wage 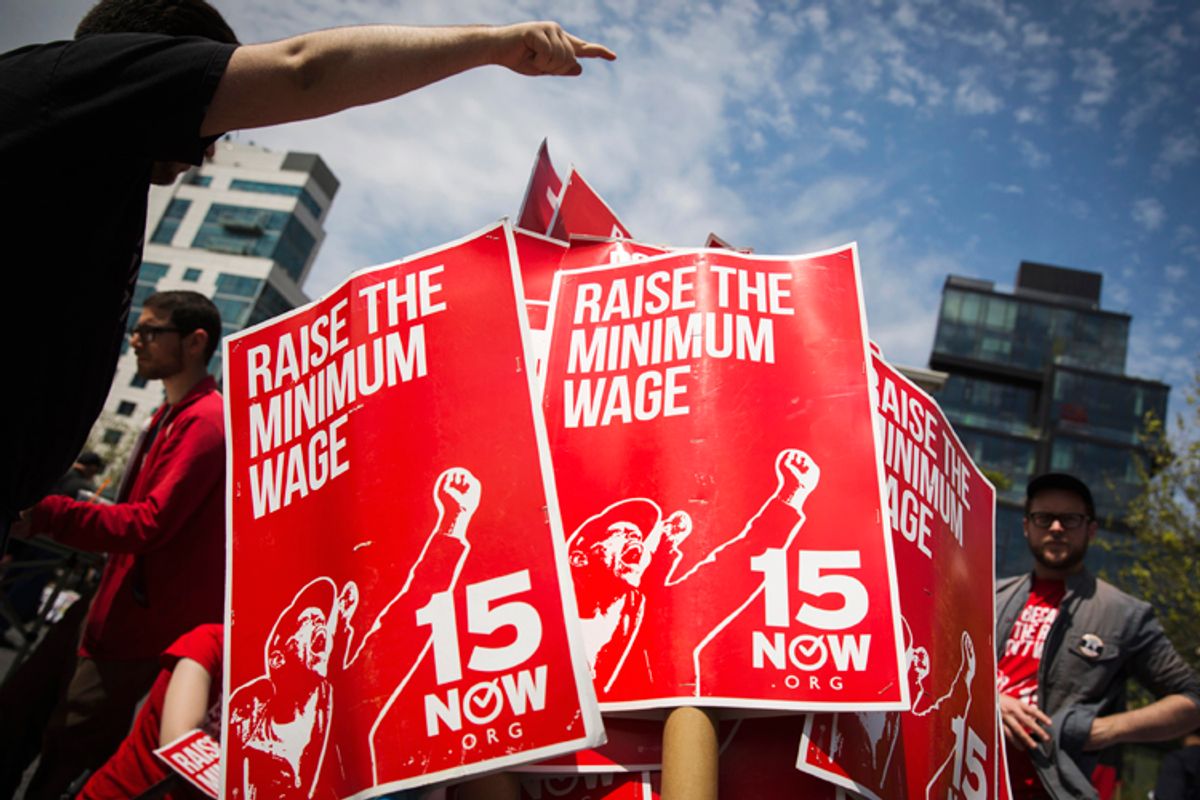 Last week, Seattle Mayor Ed Murray announced a plan to gradually increase the minimum wage within the city limits to $15 an hour, higher than any large city in the nation. And it wouldn’t be an issue of economic empowerment in America if someone at Slate wasn’t willing to argue against it in contrarian fashion. In this case, Jordan Weissmann warns that the proposal is “misbegotten,” “a step too far,” “dubious,” “ugly,” and a “cause for concern,” and will inevitably lead to low-wage workers getting replaced with robots and businesses shipping out to nearby suburbs.

First of all, the idea that this is an unprecedented expansion of the minimum wage isn’t all that true if you factor in cost of living. Seattle is one of the more expensive cities in America. The Economic Policy Institute’s 2013 Budget Calculator shows that a family of two parents and two children would need $70,025 a year to live modestly in Seattle. Two parents working full-time at the new proposed minimum wage would earn a little over $60,000. More than 120 municipalities have living-wage ordinances for some or all workers, all at wages that reflect the cost of living in their communities. And a handful, like Manchester and Hartford, Conn., Santa Barbara and Sonoma, Calif., and Burlington, Vt., are over $15 an hour. None of these cities have yet fallen into the sea, to my knowledge. Gradually moving to a citywide $15 minimum wage aligns Seattle’s worker compensation with its true expenses, and after that, the wage floor will get indexed to inflation, so low-wage workers will no longer see their purchasing power eroded.

Weissmann cautions that under the plan, Seattle will have a far higher minimum wage than surrounding cities, where businesses can easily move, even though the industry most affected by a minimum wage hike is food services. Because restaurants that want to serve customers in the place where the most people in the region live and work will just push off to Bellevue or Bainbridge Island, daring the public to come find them. Fortunately, gas is free and everyone has time on their lunch hour to take a ferry, get a burger and ride back, so this will cause no disruption or depressed sales.

More seriously, Seattle actually sought out studies on what would happen after a large minimum wage increase. In March, Mayor Murray released a report from three professors at UC Berkeley who looked at the impact of local wage laws on employment, and specifically whether businesses move outside local borders for lower labor costs. Simply put, the researchers found no such dynamic. The report indicates that increases in business operating costs get offset by reduced employee turnover, meaning less recruitment and training. Outside of food services, most businesses don’t have to pass on any costs to their customers. And in the end, the study shows, each 10% increase in the minimum wage leads to a small price increase for restaurant consumers of 0.7%. So Seattle’s roughly 60% increase would lead to your $10 lunch costing an extra 42 cents (and not all at once, as you’ll see). Considering how many new potential customers will have extra purchasing power to actually buy that lunch, the policy holds as many potential economic benefits for the city as it does obstacles.

While the researchers pointed out that they didn’t study what would happen with a $15 minimum wage, they did look at an even more drastic wage hike than Seattle’s. Santa Fe, N.M.’s increase from $5.15 to $8.50 an hour in 2004, a 65% increase that’s higher in percentage terms than Seattle’s, led to no statistically significant negative impact on employment, both inside Santa Fe and relative to surrounding cities.

And there’s another example even closer to home. As Weissmann points out but then tries to shrug off, the Seattle airport city of SeaTac raised its minimum wage to $15 an hour last November. That has been implemented, without drastic increases in prices or lost jobs. But because of some court battles, it also offers a study in miniature on how local minimum wage increases affect the wages of that locality’s neighbors.

A court decision, currently under appeal, blocked the $15 wage for workers at SeaTac airport, while keeping it in place for those workers in SeaTac off airport grounds. What has been the outcome of this? Well, as prospective employees flocked to apply for $15-an-hour jobs, Alaska Airlines raised wages for its contract employees inside the airport to $12 an hour. Clearly, in order to attract and retain the best workers in the area, Alaska Airlines had to sweeten the pot, even saying the new wages “more accurately reflect the local market.” Some of the raises were as high as 28%, showing how a rising wage tide can lift all boats, rather than the right-wing idea that jobs can only be created when wages are depressed.

Weissmann leaves all this out – the potential economic stimulus, lower turnover, the upward wage pressure on neighboring communities – in favor of scare tactics about how this is the biggest minimum wage in the world (the world, I tell you!) and that dangers lurk from lifting the wage floor too high, too fast. Fortunately, Seattle isn’t doing that. Painstakingly negotiated with civic and business leaders, Mayor Murray’s proposal phases in the increase to $15 an hour over 5 to 7 years, with a longer time horizon for smaller businesses and those who provide health benefits. This step-by-step increase is common among large cities and it reduces the impact, while allowing consideration for changes if an economic cost actually results. By 2021, the implementation date for the last of the wage increases, $15 an hour might not even look so big.

As for the idea that fast food restaurants will react to higher labor costs with automated ordering screens, ask supermarket chains how that turned out. Albertson’s eliminated their self-service checkout lanes within a few years and others have followed, mainly because U.S. customers didn’t much like it. Anyway, employees still had to be available in case of any problems, so the benefits in reduced labor costs, measured against the capital expense, was, to use Weissmann’s word, dubious.

Also lost in Weissmann’s account is the fact that more than 102,000 Seattle workers would not only benefit from higher wages, but from the dignity of getting paid enough to survive and prosper in the city. There’s a moral component to this, especially in a time of rampant inequality. The complaints that businesses will just have to raise prices or hire robots or skip town implicitly assume that they have an inalienable right to oversized profits. Workers have not shared in the country’s productivity gains for the past 35 years. Corporations have taken the lion’s share of those gains for themselves. Now here comes one effort to finally rebalance this, to allow workers at the low end to share in the fruits of the country’s prosperity, something that would reduce poverty among its targets by over 25%, and we get concern trolls like Jordan Weissmann warning how this won’t go down well at the country club, and we shouldn’t make trouble with our betters and instead be pleased with whatever scraps they allow us.

I know I’m risking being called part of the idiot left, which is how Weissmann described critics of his article on Twitter. But if supporting a careful, deliberately implemented policy that benefits low-wage workers, aligns earnings with living expenses, increases worker happiness and retention, produces little or no economic disruption (if not economic stimulus), helps workers region-wide, reduces inequality, and for a rare and fleeting moment rewards work over wealth makes me an idiot, than let me be stupid.