Coke drops its unintentionally hilarious "You're on" campaign 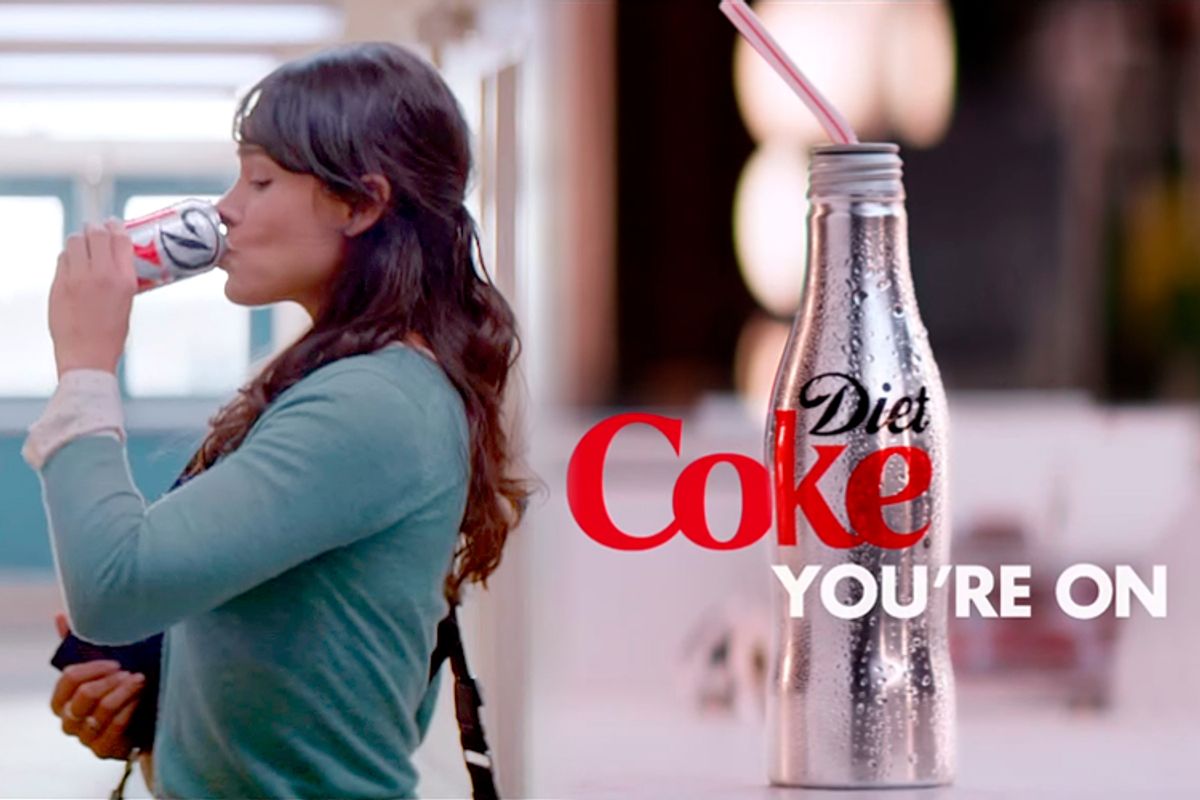 Well, they can't all be winners. Coca-Cola, the iconic soda brand that has for over a century been behind some of the most famous advertising catchphrases in history, announced Wednesday it was suspending its latest campaign. Gosh, what could have gone wrong with a message to consumers that "You're on" Coke?

It's already been a rough couple of days for the company that's long branded itself as "the real thing." On Thursday, it announced it's closing four of its fruit juice plants in Russia thanks to declining sales. And earlier this week, it stated – along with Pepsi – it would no longer include the controversial ingredient brominated vegetable oil in its beverages. Now, it's had to cop to the widespread mockery that ensued earlier this year when it rolled out a motto with a certain not-so-flattering "Wolf of Wall Street" vibe. The Diet Coke campaign, featuring an array of scenarios in which a little extra courage might be called for, was meant to convey the message that "When it's time to make a big speech or seize a big moment, count on Coke to get you through." Because apparently nobody at Coca-Cola remembers the '80s."Coke," you see, can mean a refreshing carbonated beverage, or it can also be shorthand for cocaine, a drug that made TV shows like "Miami Vice" and a lot of songs by the Eagles possible. Didn't anybody who greenlighted this thing remember "Scarface"? Didn't anybody remember that the product used to contain that now quite illegal elixir, hence the name?

Coke may not have figured out the unfortunate association, but plenty of other people quickly did -- especially when the print ads made the "Diet" part of the visual seem to recede. Seeing Coke, the drink, presented in much the same way that coke, the thing drug mules smuggle in their anuses – as "how go-getters get going" -- made for instant and sustained laughter. Coca-Cola soon had to explain that it "in no way endorses or supports the use of any illegal substance." And now, it's kicking off a new campaign, going back to that same "Just for the taste of it" motto that it first made popular in the Reagan-era golden age of blow.

Stuart Kronauge, general manager for sparkling beverages at Coca-Cola North America, denied earlier this week that the campaign had been a bust, saying, "We felt like ‘You’re on’ worked. It’s not at all that 'You’re on' failed." It's just that they're suddenly doing something else.

Sometimes a company can ride out the snickers. Four years on, we've all come to accept the still unfortunately named iPad. Other times, however, like when nobody was having it when Netflix tried to make Qwickster happen, it can't. And bad ideas go on to be the stuff of branding legend, like Dr. Seuss' environmental tale of the Lorax becoming an excuse to sell cars, or the dairy folks trying to sell milk as a cure for your girlfriend's raging homicidal moodiness. And though the soda brand may declare that it's "always" Coca-Cola, at least it's wise enough to know that some ideas deserve a short shelf life.