I want these girls back: America, Nigeria and what's really at stake

Consider all the black girls' lives we didn’t protect in the past. There's always a value that trumps saving us 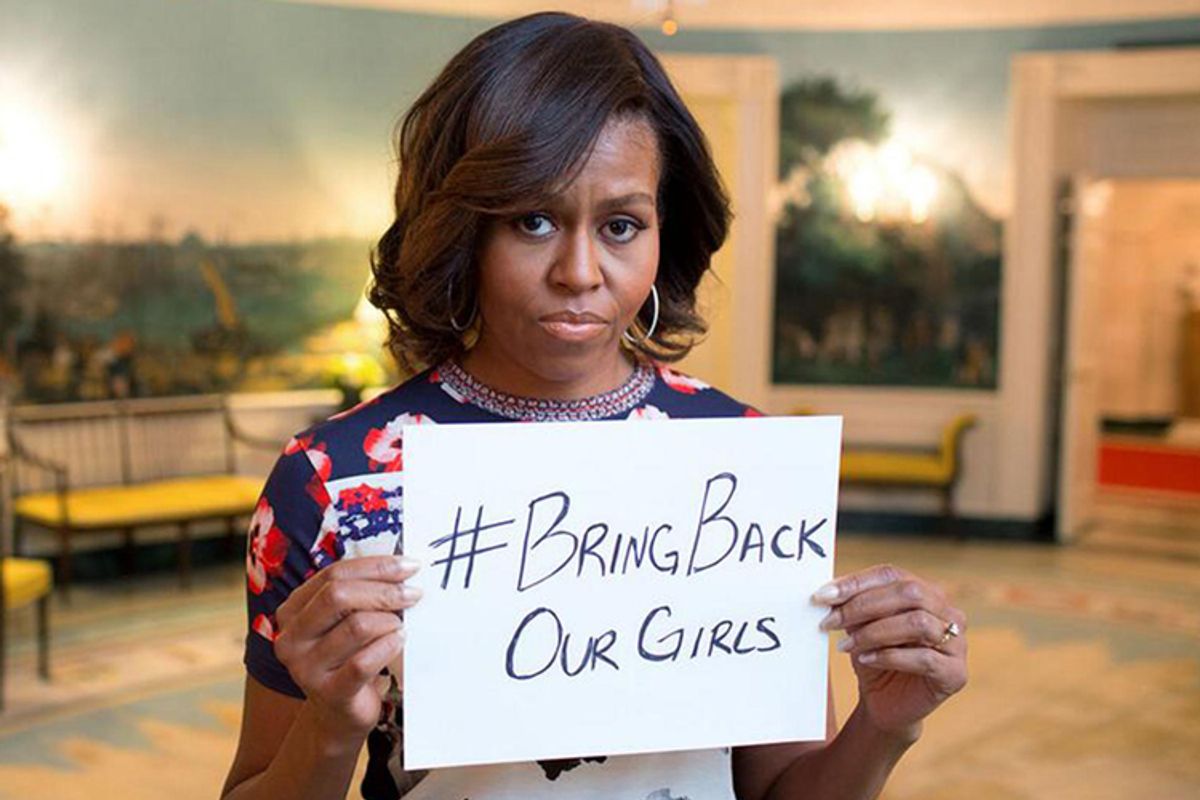 For the last few weeks, my eyes, like the eyes of many, have been trained on Nigeria, hoping that the over 300 girls who have been kidnapped from their school in Chibok by the terrorist organization Boko Haram will be returned safely to their families. Gone for one month now, all attempts to have the girls returned have failed, save about 50 who have managed to escape.

The #BringBackOurGirls Twitter campaign has created a groundswell of support around the world, including among activists in the U.S. Earlier this month, local activists hosted a “Rock a Gele for Our Girls” campaign. And our hearts have been snatched into our throats as the list of the names of each of these girls has emerged, making them more real.

In the meantime, those of us who, by virtue of our Western privilege, pay little attention on the regular to African politics of any type have rushed to get a crash course in who Boko Haram is, the atrocities they have committed, particularly over the last five years, and the reasons why the Nigerian government has been largely ineffective at curtailing the organization’s reign of terror.

Among my feminist, lefty, people-of-color political circles, American support for the hashtag campaign has left us unsettled. Last week, Michelle Obama tweeted a picture of herself holding a placard with the words "#BringBackOurGirls." Then in an unprecedented move this week, she gave the weekly presidential address, highlighting the need for action to rescue these girls. Much as many of my black feminist colleagues realized, the Obamas identify with this particular struggle in part because they have two daughters.

When I learned that the U.S. had offered aid in helping to bring the girls back, I felt conflicted. U.S. “aid” never comes without strings attached, and our interventions are always in service of our political and military interests. As American military intervention goes, there is no such thing as political altruism.

How to balance my clear understanding of the perils of U.S. militarism with my deep desire to have “our girls” back has been an unresolvable conflict. I have followed articles such as this one that challenge Americans not to support U.S. military intervention as the solution to this problem. In principle, I agree with such stances. I have cringed at suggestions from otherwise well-meaning citizens about how we just need to “go on in there” and bring them back.

I mean, the average American’s understanding of what the military does is mostly informed by military movies – everything from "Rambo" and "Top Gun" to "G.I. Jane" and "Black Hawk Down." In this current political scenario, Boko Haram and their retrograde anti-Western ideas feed every imperialist myth we in the West have about how “primitive,” “undeveloped” “benighted” (to invoke 19th century language) Africans treat women. They are the ultimate bad guys, and most of us imagine that with one phone call the president could just send in SEAL Team Six, Olivia Pope that shit (to mix metaphors – but what I mean is, handle it), and have these girls back, in time to start the next school year.

As someone who grew up on "Rambo" and "Top Gun," let me confess that despite myself, my training, my hatred of war and violence, my suspicion of – my utter lack of faith in, really -- the U.S. nation-state and its imperial machinations, this is an attractive fantasy.

I want these girls back. I want them to be able to be with their families, to recover, to have the opportunity to receive the education that they risked their lives and safety going to Chibok to get. I want them to have it by any means necessary.

When I see the hundreds of Nigerian mothers and family members crying out “Bring back our girls,” I see not only mothers and daughters, but black mothers and daughters. Black women and girls are not only invisible in U.S. political discourses about terror, safety and protection; they are invisible globally. This diasporic racial connection – the fact of these girls’ blackness -- matters for two reasons: first, because imperialism and racism are inextricably linked, and people of color are most vulnerable to shows of imperial power. And two, because these girls are not all “our” girls. They are not the girls of those well-meaning white folks who otherize African countries, secretly see them as primitive, and think that what Nigeria needs is a kind of secular military-missionary intervention. But they are the girls of those of us who have a diasporic race consciousness and a commitment to respecting the right of Nigerian people to self-determination on this issue.

As a nation, the U.S. hasn’t cared about African women being subject to rape as a tool of war – not if the atrocities in Rwanda, Somalia, Sudan, South Sudan, the Democratic Republic of Congo and a host of other places are any indicator. Still, when I hear other skeptical leftist Americans, who hold anti-imperialism as a supreme value, say, “Why this? Why now?” I think there are many answers. But I think we must remember a very basic one, which is the power and visuality of social media. Yet again, we see that when black people, particularly the black women who dominate political discourse on Twitter, have access to a platform, and the tools to make ourselves seen and heard, we do. We do so powerfully. We do so in a way that is incredibly disruptive, in a way that demands the world pay attention.

Part of what is at stake here, part of what these Nigerian mothers and the Twitter activists who have amplified their voices have forced into a conversation, particularly for those of us on the black left, is an uncomfortable question about what our politics must be if we place the protection of black girls at the center.

One set of arguments against U.S. involvement has been that we routinely overlook atrocities against African women, so we should distrust and therefore not support the motives of the U.S. government in getting involved in this instance. I find that argument supremely uncompelling. The logic that says that because we stood idly by in the past we should stand idly by now strikes me as absurd.

While I don’t doubt the political and economic end game that buttresses the government’s logic of participation, I take issue with the argument that intervening to help these girls will uniquely cause a set of imperialist atrocities that could otherwise be prevented.

I take issue with a set of conclusions that deems these girls expendable in service of the broader commitment to protecting Nigerian sovereignty and American left commitments to anti-imperialism. Sacrificing women for the sake of protecting national sovereignty is the ur-text of patriarchy.

As my colleague professor Melanye Price, a political scientist, said to me in a conversation about this, “Why do we draw the line here with these girls?”

I recognize that activists and family members on the ground in Nigeria absolutely do not think these girls are expendable. African feminists and activists have worked mightily to advocate for the safe return of these girls. I want to be clear. My critique is about how this discourse about the implications of U.S. involvement plays out among both native and diasporic black people.

Certainly there is an argument to be made that U.S. military intervention will only exacerbate anti-Western sentiment and lead to more killing and terror. We all have to sit with the very real possibility of this outcome. Yet in the immediate moment, most of the U.S. aid has been to provide resources in terms of intelligence and hostage negotiators. Moreover, we have urged the U.N. to levy sanctions and are working to make this an international effort. We have not taken over. As of yet.

Thus, I return to my skepticism at those African-Americans who in a desire to be right, in a desire not to be accused of othering or colonizing or co-opting Nigerian politics, conclude that anti-imperialism is of greater value than the safe return of these girls.

I, too, have publicly balked at the audacity of this president to institute the My Brother’s Keeper initiative to help men and boys of color while leaving women and girls of color in this country out in the cold. It is easier to tell ourselves that these 300 Nigerian girls over there who’ve been kidnapped, raped, married against their will, sold into the sex trade and robbed of education, are so different from the thousands of black girls right here in the U.S. who are undereducated and subject to sexual abuse, rape and domestic violence, and murder at higher rates than almost any other group save Native women in this country.

That the Obamas identify with these kidnapped Nigerian girls and their families and not the scores of struggling black girls and their families in the U.S. is infuriating. But it doesn’t mean we don’t have a national duty to act. Part of the reason that black American women so powerfully identify with this campaign is that for the first time in history there is a black man with enough political clout and power to help a group of black girls who have been harmed. And he has the willingness to do it.

U.S. military intervention is the absolute last resort. I support in its stead diplomacy, sanctions and joint international efforts that support the Nigerian government in the ways it needs to get these girls back. Still, time is of the essence; the longer they are away the less chance there is of them being safely returned. These girls are being brutalized as I write (and you read) this. So if the Nigerian government asks for the help of the U.S. military, I support it all the way. Not because I’m an imperialist, not because I’m unaware of the potential Faustian bargain being made, but because black girls' lives matter. And if we cannot find an argument whereby nation-states can come together to intervene to protect these girls, then what we are also arguing is that there is never a compelling reason for the state, ours or any other, to protect black women, period. There is always a value, whether on the left, right or center, that trumps saving us. There is always something or someone who matters more than us.

I’m not willing to concede that. I challenge us to figure out a politics that acknowledges materially the importance of the lives of black women and girls while also recognizing all the damage unchecked U.S. military power does.  As far as left politics go, support for U.S. military intervention is never the correct thing. But the question we must all ask is, “What is the right thing?” And for me my answer to that question is informed by the words of the Combahee River Collective:

Above all else, Our politics [spring] from the shared belief that Black women are inherently valuable, that our liberation is a necessity not as an adjunct to somebody else's but because of our need as human persons for autonomy. This may seem so obvious as to sound simplistic, but it is apparent that no other ostensibly progressive movement has ever considered our specific oppression as a priority or worked seriously for the ending of that oppression. …We realize that the only people who care enough about us to work consistently for our liberation are us.