Forget the book tour designed to polish his legacy. Tim Geithner's record on housing will forever live in infamy 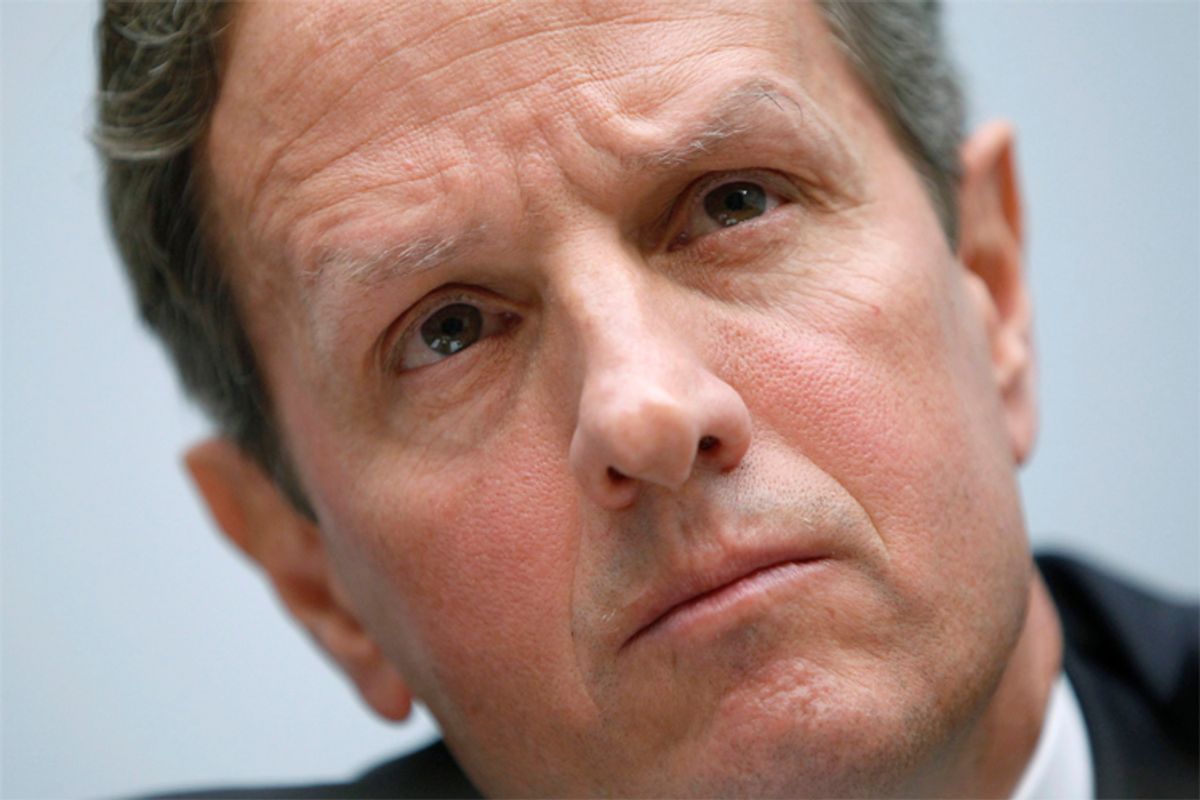 As Salon pointed out yesterday, Bush-era economist and Romney advisor Glenn Hubbard claims former Treasury secretary Timothy Geithner lied in his book "Stress Test," when describing a conversation from 2012 about Hubbard supporting tax increases. But while the he said/she said doesn’t interest me, a separate, throwaway statement by Hubbard does matter — in fact, it tells you plenty about Geithner and his policy preferences during Obama’s first term.

“I saw some of the excerpts about housing and I must say I split my side in laughter because Tim Geithner personally and actively opposed mortgage refinancing, constantly,” Hubbard told Politico. “And now he’s claiming this would be a great idea in the country.”

We aren’t obligated to believe Hubbard here, especially because his recollection of the tax conversation is probably misleading, if not untrue. And unfortunately, Hubbard declined to elaborate when I asked him for more detail. However, we have a ton of public information available to inform the debate over Geithner and housing.

When Hubbard talks about refinancing, he’s being very specific. He co-wrote a plan in 2008 endorsing mass refinancing through Fannie Mae and Freddie Mac, as a economic stimulus, getting homeowners reduced monthly payments. This was one of the major fiscal policy tools available to the Administration that didn’t require additional spending — the Federal Reserve had lowered interest rates, it was merely up to Fannie and Freddie to take advantage of it. But in the early years of the crisis, the White House did little. Brad DeLong backs up Hubbard on this point, saying he never got a satisfactory answer for the lack of mass refinancing.

It took until 2012, just coincidentally an election year, for the administration to remove blockages on their key refinancing program (the Home Affordable Refinancing Program, or HARP). In an interview with Ezra Klein, Geithner plays the classic three-card monte trick of taking credit for every single refinance in the entire country, a number surpassing 20 million. In reality, HARP just hit 3 million refis this February, with the overwhelming majority of them coming after 2012. In the darkest years of the recovery, failing to engage in mass refinancing, particularly for those underwater homeowners (who owed more on their houses than they were worth) who couldn’t get a refi without government assistance, really missed an opportunity to put more money in homeowner’s pockets that would get spent.

On the more critical issue of helping homeowners stay in their homes, Geithner looks even worse. One smoking gun in the debate is the continued presence, throughout the Geithner tenure, of Ed DeMarco, a Bush-era official running the Federal Housing Finance Agency, the conservator for Fannie and Freddie. DeMarco blocked both refinancing for underwater borrowers and principal reductions for struggling homeowners, seen as the strongest and most sustainable way to keep people in their homes. The administration made no effort to remove DeMarco from his post despite claiming to be at odds with his policies.

In reality, Geithner made the same arguments as DeMarco against principal reduction, most explicitly in a hearing of the Congressional Oversight Panel in December 2009, arguing it would be “dramatically more expensive for the American taxpayer, harder to justify, [and] create much greater risk of unfairness.” Geithner later cited the potential moral hazard of “strategic default,” where homeowners would intentionally not pay their mortgage to get a principal reduction (something that never has and never would happen), to argue against making such modifications mandatory when they made sense for the investor and the borrower.

Keep in mind that this was the guy who handed hundreds of billions of dollars over to banks with basically no strings attached, suddenly worried about fairness when homeowners get a break on their mortgage payments. The White House was certainly chilled by the Rick Santelli rant about “the loser’s mortgages,” and mindful of giving money to the “wrong” people, but that was a political problem, one that could be solved by a stronger economic recovery, like through preventing foreclosures.

In his book, Geithner says that “I don’t think a more compliant FHFA would have produced a dramatically different result,” meaning that whatever differences existed between the administration and DeMarco were immaterial. In fact, the thrust of Geithner’s argument on housing in the book is that the administration did the best they could possibly do, that the alternatives were impractical or unwise, and that ultimately their efforts prevented 5 million foreclosures. This is another three-card monte trick, taking credit for every single mortgage modification, including ones not aided by the government’s HAMP (Home Affordable Modification Program) incentive payments. Even modifications that later went into default get counted as “preventing” a foreclosure under Geithner’s math. For context, there are currently not even 1 million permanent HAMP modifications.

Here are a few points to puncture holes in that balloon. On January 15, 2009, Larry Summers wrote a letter to Congressional leaders, promising a “sweeping effort to address the foreclosure crisis,” including a measure to “reform our bankruptcy laws.” This letter was critical to getting the second tranche of bailout money for the banks out of Congress, and yet afterwards, the administration gave little more than token support for the bankruptcy reform, known as “cram-down,” which would have allowed judges to modify terms of primary residence mortgages. Geithner admits in his book that “I didn’t think cram-down was a particularly wise or effective strategy,” meaning that, unless you believe Geithner played no role in administration decisions, the economic team effectively lied to Congress about cram-down to get the bailout money.

Geithner elaborates about cram-down to Klein, saying you would still have to go through a broken servicing industry and the court system to get it done, showing that he has no understanding of the value of cram-down whatsoever. The point, as the Cleveland Federal Reserve makes clear, wasn’t to actually use the bankruptcy process, it was to keep it in reserve it as a threat, to force banks toward modifications instead of a unilateral write-down administered by a judge. The point was increasing leverage for homeowners, and it’s not surprising Geithner wouldn’t grasp that.

As for their foreclosure program, HAMP, being the best available option, Barney Frank got Hank Paulson to concede to get the banks to reduce mortgage balanaces in December 2008, as long as the Obama transition team would ask for it. “We tried to get the Obama people to ask him and they wouldn’t do it,” Frank told New York Magazine. Similarly, despite all kinds of evidence of servicers abusing borrowers through HAMP and using the program as a predatory lending scheme to push people into foreclosure, Geithner’s Treasury Department never sanctioned a single mortgage servicer for failing to meet program guidelines, and never clawed back a dollar of incentive payments. Geithner acknowledges servicer incompetence, but when he had the chance, he did nothing about it.

Contrary to Geithner’s opinion, there were other options. Glenn Hubbard, among others, suggested a modern-day version of the New Deal’s Home Owner’s Loan Corporation, which bought up mortgages at a discount, reworked them for borrowers, and took a piece of equity when home prices rebounded. Geithner protests that this would be terribly expensive and complex, yet somehow, hedge funds and community-oriented capital groups are doing it right now. The discount on the mortgages would have been higher at the depths of the crisis, meaning a cheaper cost and higher returns at a scale that would have made a real difference.

Sorry for the Vox-like explainer on all this, but I hope you can see the fact pattern I’ve built here. At every turn on housing — on mass refinancing, on principal reduction, on leverage for homeowners in the bankruptcy process, on forcing banks to write down mortgages, on a modern-day HOLC — the evidence points to Tim Geithner preferring whatever option put the least pressure on banks, rather than actually helping ordinary people. He made far more excuses to do nothing than any effort to make a difference. In fact, the programs were never meant to help homeowners, designed only to “foam the runway” for the banks, to spread out foreclosures and allow banks to absorb them. Homeowners are the foam being crushed by a jumbo jet in that analogy, squeezed for as many payments as possible before ultimately losing their home. And I don’t have to just focus on housing; this is indicative of Geithner’s worldview, which sees protecting the financial system at all costs as the only thing that matters.

His pride refuses to allow him to acknowledge mistakes, and the impact on millions of Americans. Even as he says in the book “I wish we had expanded our housing programs earlier,” he completely contradicts that to Andrew Ross Sorkin, saying the statement is “unicorny” and only makes sense “if we had no constraints on resources or authority.” The constraints, of course, were all generated by Geithner.

Geithner admits in the book a “frustration with the populist left.” But the ideological shading obscures the debate. Geithner’s problem isn’t with populists; it’s with the millions of Americans who suffered for his policies.

(Note: Timothy Geithner was asked for comment through his publisher, but was not made available. The offer still stands.)