Donald Sterling stole the spotlight, but the menace from Bundy's supporters continues -- and might be getting worse 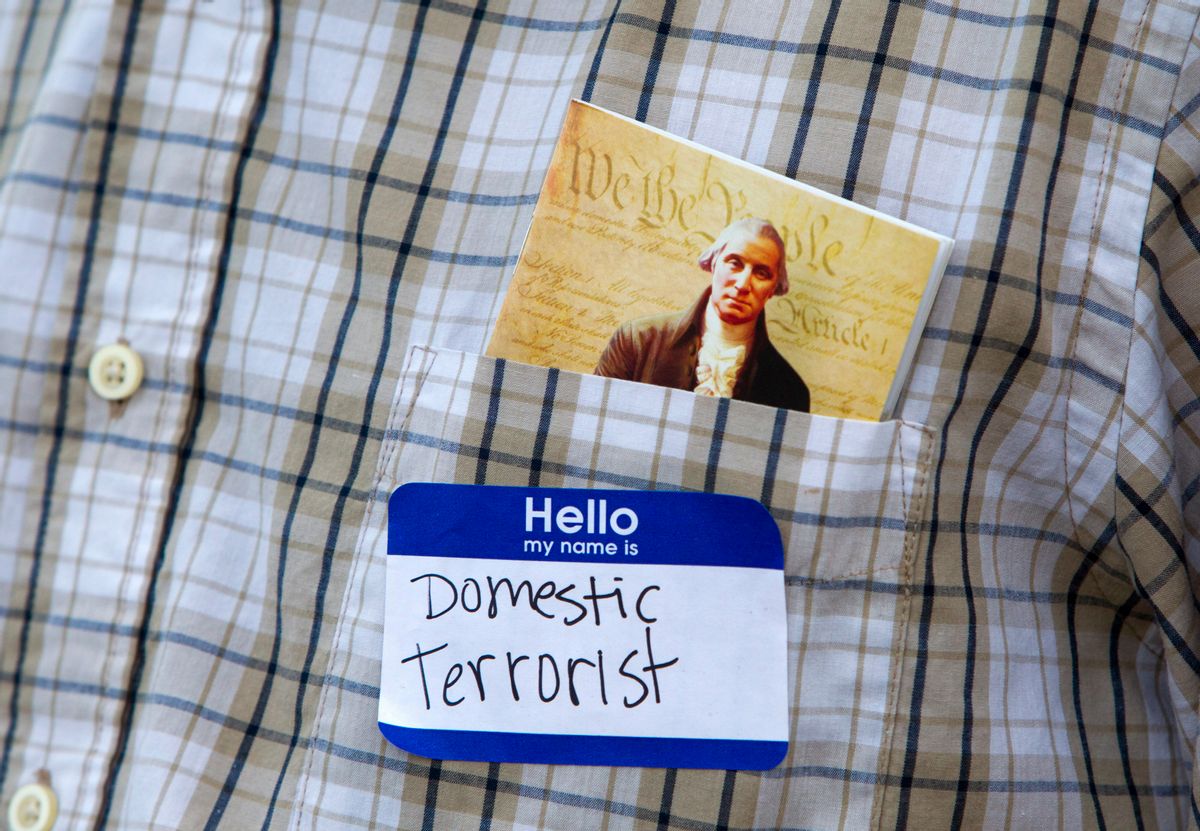 A supporter of rancher Cliven Bundy carries a copy of the U.S. Constitution in his shirt pocket during a Bundy family "Patriot Party" (Reuters)
--

When Cliven Bundy decided to share with America “one more thing I know about the Negro,” most people immediately assumed his 15 minutes of fame were up — particularly when Donald Sterling quickly overshadowed him — and they were probably right.

But that hardly means that nothing significant has happened around Bundy since. Quite the opposite.

The explosion of attention he garnered does not come out of nowhere; it comes out of decades of political organizing, theorizing and scheming. And what's been happening in and around the Bundy Ranch over the past month seems sure to shape the further evolution, not just of the hard-right fringes from which he and his close defenders hail, but of the much wider range of right-wing political culture that sympathetically supported him, and still feels “he had a point.”

In fact, the first violent fruits of that further evolution may be just around the corner, as the increased threats have already begun to fly — almost comically in internal battles between different factions at Bundy's ranch, but also with serious menace directed against Bureau of Land Management personnel in neighboring Utah.

But, most important of all, the outbreak of violence between Bundy supporters — including threats of shooting one another — dramatically illustrates the utter foolishness of the “good man with a gun” formulation.  It's not like this should be a stunning revelation. The American South — a classic “honor culture” — has always been bedeviled by high levels of violence in which both parties clearly saw themselves as good. Indeed they were fighting precisely to defend their good name, their reputation, their honor.  That legacy is alive and well in the militia movement of today ... and it threatens to overspill its banks and flood the rest of America, if we let it.

Here, then, is a quick rundown of what's happened since the spotlight shifted:

Bundy's land claims were revealed as bogus. Even though it's legally irrelevant to owing grazing fees, Cliven Bundy had claimed that he should be exempt, because of “"ancestral rights," claiming that his family had worked the land since the 1870s, well before the BLM came into existence. But a report from KLAS-TV in Las Vegas revealed that even this excuse was pure fabrication on Bundy's part. His family had actually purchased the land in 1948 from Raoul and Ruth Leavitt, according to Clark County property records.

Response to intimidation of the community: Late last month, Rep. Steven Horsford, D-Nev., sent a letter to Clark County Sheriff Doug Gillespie, Fox-5 Las Vegas reported, concerning the militia members who remained in Bunkerville at and around the Bundy ranch. Horsford cited claims that armed militia members had set up checkpoints where they required residents to prove they live in the area before being allowed to pass, and have also established a presence along highways and roads, as well as in community areas, including churches and schools. Later statements by Bundy and his supporters inadvertently buttressed these claims -- in part because Bundy has no grasp of the difference between public and private land -- though it's not clear how widespread such menacing activities were. In the letter, Horsford said, "I am greatly concerned about the safety and well-being of my constituents after meeting with local community members this past week. I urge Sheriff Gillespie to investigate these reports, as this sort of intimidation cannot be tolerated."

Horsford was careful to strike a balanced tone. "We must respect individual constitutional liberties, but residents of and visitors to Clark County should not be expected to live under the persistent watch of an armed militia," he wrote. "Residents have expressed their desire to see these groups leave their community. I urge you to investigate these reports and to work with local leaders to ensure that their concerns are addressed in a manner that allows the community [to] move forward without incident."

Negative impacts were felt in nearby Mesquite, accord to a report from KLAS-TV, where militiamen reportedly threatened people, and businesses claimed to have lost over $100,000 because of their presence, including a local hotel forced to evacuate all of its clients one evening due to a bomb threat. The hotel also received at least nine threatening calls after it allowed BLM rangers to stay there. If they weren't kicked out, the callers threatened, the hotel “would not be standing in the morning.”

Violent internal split, with threats of shooting among Bundy supporters: Around the same time, a wild, paranoid rumor spread throughout the camp that Attorney General Eric Holder was preparing a drone strike against them. On April 30, David Neiwert, at the Southern Poverty Law Center's Hatewatch blog, described what happened next:

Apparently, someone within one of the major factions at the camp, the Oath Keepers, relayed word of the imminent drone attack to his leaders. Oath Keepers founder Stewart Rhodes responded by pulling his people out of what they called “the kill zone” (the area the supposed drone would be striking). When the other militiamen learned that the Oath Keepers had pulled out, they were outraged.

As you can see in the video below, the angry militiamen – led by a Montana “Patriot” named Ryan Payne, who has been acting as the spokesman for the militiamen at the ranch – held an impromptu gathering at the camp to discuss the situation. They openly talk about shooting Rhodes and other Oath Keepers leaders – because in their view, the Oath Keepers’ actions constituted “desertion” and “cowardice” – and describe how “the whole thing is falling apart over there.” At the end, they vote unanimously to oust the Oath Keepers, or at least its leadership, from the Bundy Ranch camp.

And on May 2, Neiwert reported further on how the two factions nearly came to a shoot-out (“Militiamen and Oath Keepers Drew Weapons, Threatened to Kill Each Other”), and how some actual physical violence occurred, “when angry young men knocked two elderly veterans, including Steve Homan, to the ground.” Toward the end of his report, he noted:

We saw the same kind of macho radicalism during the April 12 confrontation with Bureau of Land Management and other law-enforcement officers – though it was somewhat obscured from public view.

A remarkable retrospective piece on the standoff from KLAS-TV laid this reality bare. It revealed that the situation came within a hair’s breadth of becoming an all-out gun battle, which the gathered “Patriots” defending Bundy seemed determined – indeed, outright eager – to have.

Investigation of illegal acts: On April 30, a KLAS-TV report, “Police say Bundy ranch protesters not off the hook,” gave the first clear public indication that multiple acts of lawlessness during the standoff would not go unpunished:

"They're armed, they have an agenda, and they're committed to whatever they believe in, no backing down. One or two of them would never have done what they did--point weapons at us--but when you have 300-400 and they can be anonymous in a crowd, you get caught up in that," Sgt. Jenkins said.

Lombardo confirms that Metro developed a lot of intelligence about militia members who were present. Those who aimed their guns at officers will be dealt with.

"Yes, there will be consequences, definitely. That is unacceptable behavior. If we let it go, it will continue into the future," Lombardo said.

Law enforcement sources told us that federal officials are preparing to move against Cliven Bundy, but they might wait months until things die down before making their move.

And, on May 8, the Las Vegas Review-Journal reported that the FBI had opened a criminal investigation as well, according to Clark County Sheriff Doug Gillespie.

Threatened spread of violent confrontations: On May 7, the Salt Lake Tribune reported,

“BLM workers on alert after wrangler threatened with gun on I-15.” During the incident:

The men, wearing hoods, held up a sign, apparently scrawled on a piece of paper, that read, "You need to die." One of the men pointed what appeared to be a Glock handgun at the wrangler.

The wrangler tried to make out a license plate number, but the plate had been covered with duct tape, Reid said.

The next weekend, Bundy supporters showed up elsewhere in Utah, once again challenging the BLM. The site was Utah's Recapture Canyon, an 11-mile stretch of federal land that is home to Native American archaeological sites the BLM has declared off-limits to ATVs since 2007, because ATVs were damaging the land and folks using them were vandalizing Native American sites. San Juan County commissioner Phil Lyman was organizing the protest, intended to include illegal riding in the prohibited area. Lyman doesn't think the BLM has the authority to protect cultural resources, and said the goal of the ride was to reassert county jurisdiction in the face of federal "overreach," according to the Salt Lake Tribune, a goal that echoes Cliven Bundy, who suddenly endorsed the ride just days before it was scheduled. Hence, Ryan and Aamon Bundy, two of Cliven Bundy’s sons, and several militiamen showed up in support. Lyman was involved in a delicate dance, trying to strike the exact same themes as Bundy, while presenting himself as more sober and restrained. Right. There was a time not so long ago when that was Bundy's game, too.

If we can summarize what's happened since the spotlight moved on, we see the ongoing spread of lies and violence on the one hand — which is completely unsurprising. The almost-shooting war that Bundy supporters got themselves into is precisely the reason that the Second Amendment doesn't mean what they think it means: As John Locke's social contract theory explained, civil society was created because individual force cannot guarantee peace and security — even among the supposedly like-minded. Hence, the turning of violence against one another was just as predictable as its threatened spread to Utah as well.

On the other hand, we see a deliberately restrained, but methodical law enforcement process underway. Let's hope it stays that way, because nothing damages the law as badly as those who abuse its authority, or use it recklessly. But let's also hope they don't take too long in beginning to bring folks to justice. Hatred, lies and violence already have too big a head start. We don't need to let them get any further ahead.