Those who fall into debt are shamed for spending irresponsibly. But the truth of the matter is much more alarming 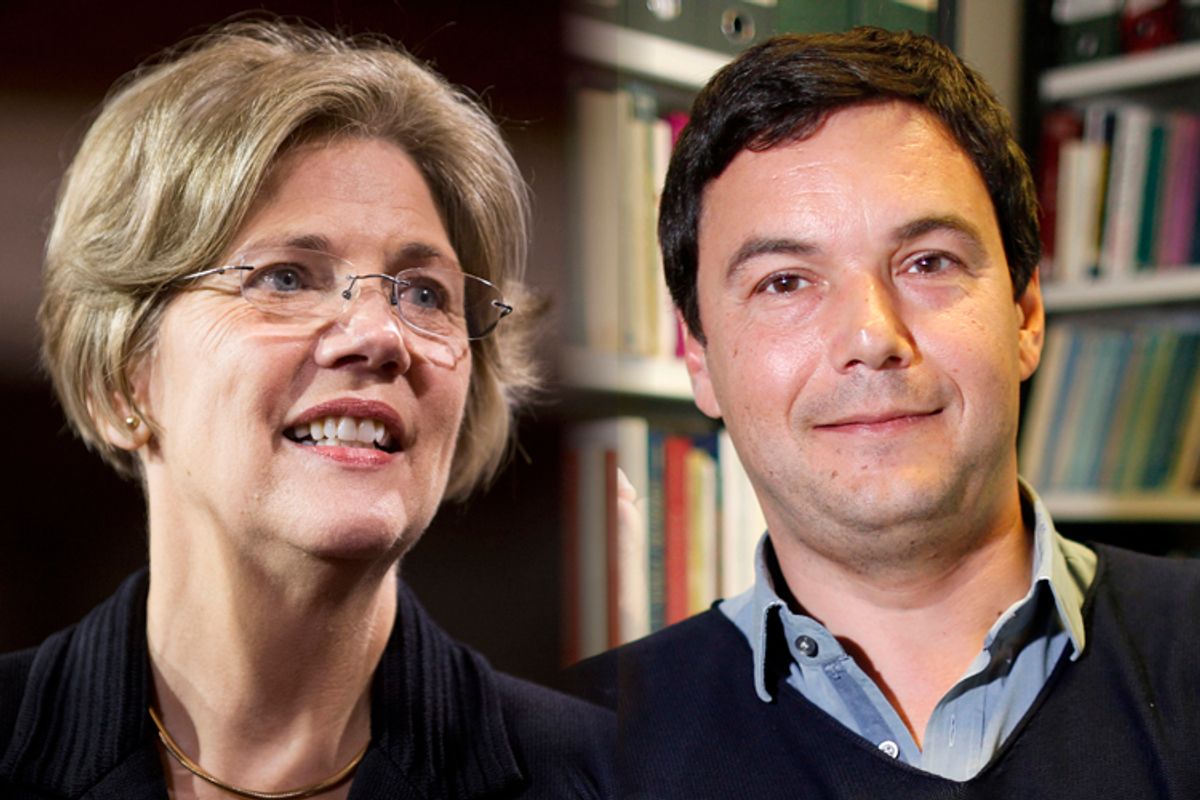 “Did you know millions of Americans live with debt they can not control? That’s why I’ve developed this unique new program for managing your debt. It’s called, Don’t Buy Stuff You Can’t Afford.”

According to the prevailing story, debt is caused by lavish and irresponsible spending by poor and middle-class families. But like much “conventional wisdom,” an increasing amount of evidence belies this point. In fact, the decline of saving and the rise of debt was an almost inevitable consequence of families trying to scrape by in the face of rising inequality. This is the corollary of French economist Thomas Piketty’s now-famous observation: While capital is increasingly concentrated at the top, it turns out that debt is becoming concentrated at the bottom.

In the same "SNL" bit, Amy Poehler says, “There’s a whole section in here about buying expensive things using money you save.” This supposedly common-sense observation is mirrored elsewhere. The American Institute of CPAs runs an advertising campaign urging people to "Feed the Pig." One such ad depicts a responsible couple studiously saving for a house, while another eats lobster, receives massages and then complains about “never having enough to put away.” Underlying both the real commercial and the satirical one is the idea that those who aren’t saving could do so, but are instead spending the money. But the evidence for this story is weak.

A more compelling story is that inequality has made it harder for households at the middle and bottom to save.  In fact, the decline in savings has coincide with a rise in income inequality (see chart). There is evidence that these trends are connected. American households falling in the bottom third of income growth from 1999 to 2007 accounted for a full half of the decline in the overall saving rate over the same period, according to the IMF. Meanwhile, a 2012 Demos study finds that “40 percent of households used credit cards to pay for basic living expenses such as rent or mortgage bills, groceries, utilities, or insurance, in the past year because they did not have enough money in their checking or savings account.” Another 2012 study finds that “regions or periods with higher inequality are characterized not only by a more unequal distribution of saving rates but also by lower saving rates for most of the income distribution.”

One of the myths of the right has been that if the rich have more money, they'll save and invest more as a result, thereby stimulating the economy. That is, more inequality will lead to more national saving. In fact, the data shows that inequality just concentrates wealth in the hands of the few. It also points to the important possibility that the increase in income inequality is what drove the savings rate down to begin with, by also increasing disparities in wealth.

Wealth serves as a buffer for an income shock, like losing a job or a medical emergency; it also constitutes a family’s retirement income and the means for funding children’s education. However, the rise in income inequality has been coupled with a rise in wealth inequality, meaning that wealth is increasingly concentrated in the hands of the few. Recently, Emmanuel Saez and Gabriel Zucman have shown the increase of wealth inequality in the United States (source). This rising wealth inequality means that American households don’t have anything to fall back on in the case of a bout of unemployment or a health crisis. (One study finds that 62 percent of bankruptcies are medical-related.)

In a recent study, Amy Traub, a senior policy analyst at Demos, sought to test whether those with credit card debt were the profligates portrayed by popular culture. She used a national survey of 1,997 households to create two groups indistinguishable in terms of income, race, age, marital status and rate of homeownership. The only difference? One group had credit card debt, the other group didn’t. Traub finds that the households without debt had more assets, and fell back on them when dealing with unexpected expenses. She finds “little evidence” that “households with credit card debt are less responsible in their spending habits than households that do not have accumulated debt.” Instead, she finds that unemployment, children, lack of education, lack of health insurance and negative home equity correlate strongly with high levels of debt.

In their famous book on the subject, "The Two-Income Trap," Elizabeth Warren and Amelia Warren Tyagi argue that slowing income growth, not overspending, is what's driving families into debt. In an essay on Boston Review they write that,

The Warrens point to the increasing cost of education and housing. A 2000 study performed in Fresno, California, found that the most important determinant of neighborhood housing prices was school quality. The strongest evidence that the Warrens cite is that between 1984 and 2001 housing prices for those with one or more children increased at three times the rate of those without children. As families have tried to provide for the education for their children, they have increasingly been squeezed by high housing costs.

The final factor driving debt is unscrupulous practices by banking institutions.The CARD Act is saving Americans $12.6 billion a year by cutting back dodgy fees and other shady practices. But payday lenders can still prey on the poor. Traub finds that households with higher levels of credit card debt were more likely to have received financing from payday lenders. We need policies to give poor and middle-class workers more income and wealth. Increasing the minimum wage is a simple start. Incentivizing worker ownership and profit-sharing would also benefit workers. The government could give citizens a small basic income each year and it could also institute a “baby bond” policy, which would foster wealth building. On the other side, it needs to bust up concentrated and idle wealth by taxing it.

As Piketty notes in his interview with Matthew Yglesias, “My point is to increase wealth mobility and to increase access to wealth.” He aims to “reduce taxation of wealth for most people, but to increase it for those who already have a lot of wealth.” By spreading wealth to the middle class and poor, we could decrease the reliance on the “plastic safety net,” and create a strong and sustainable middle class.