Bank pleads guilty to a felony, gets hit with a mild inconvenience. Compare that to how our drug war is executed 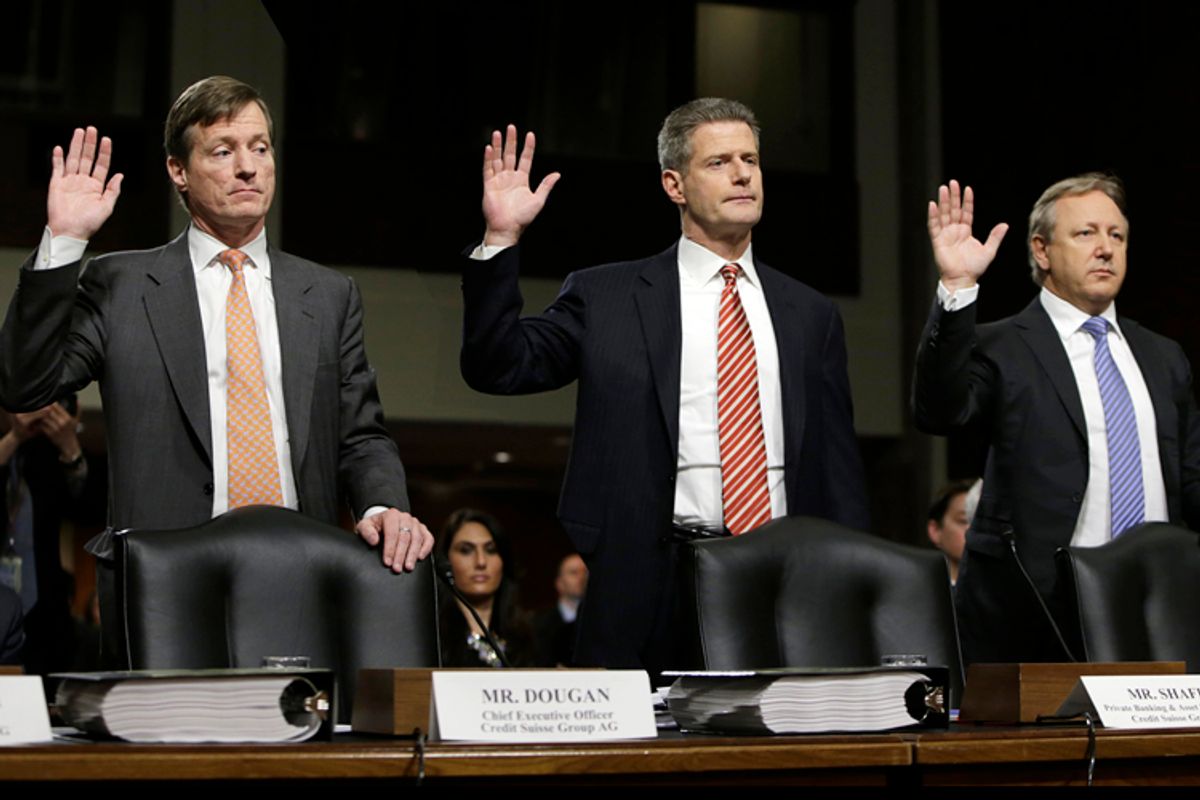 On Monday, Credit Suisse became the first major bank in 25 years to plead guilty to a felony in U.S. court. Unfortunately, they don’t yet make handcuffs that fit around a downtown New York City office building, and the executives who committed the felony, conspiring to assist in widespread tax evasion, either haven’t been charged or haven’t been extradited from Switzerland. And in addition, the other side of the tax evasion equation – the actual wealthy Americans who hid their money in private Credit Suisse accounts – aren’t that much closer to being exposed.

The action against Credit Suisse culminates a multiyear investigation that had stalled since a series of 2011 indictments against eight bankers at the firm. It took a stinging Senate Permanent Subcommittee on Investigations report to really kick-start the case, as it revealed how the bank would blatantly recruit wealthy customers for tax evasion, and go through major efforts to keep the accounts secret, like delivering monthly statements inside copies of magazines. Carl Levin, the author of the report, badgered Credit Suisse executives and the Justice Department for their failure to catch the lawbreakers and hold them accountable. Three months later we get this plea deal. It’s not a big surprise.

In the agreement, Credit Suisse pleaded guilty to one count of aiding tax evasion. The Justice Department made sure to check with New York’s banking regulator, the Securities and Exchange Commission and the Federal Reserve to eliminate any unwanted consequences from the guilty plea, like the revocation of Credit Suisse’s banking charter or investment-adviser license. (Incidentally, there are fewer of these collateral consequences with foreign banks, which gives away why Credit Suisse, and not JPMorgan Chase or Bank of America, was forced to plead guilty.) Instead of a corporate death penalty, Credit Suisse will pay $1.8 billion in fines to DOJ, $715 million to New York’s Department of Financial Services, and $100 million to the Fed. In addition, the bank will have an independent monitor overseeing its activities for two years.

This makes any fallout from the scandal mostly one of reputation, which means not much fallout at all. Credit Suisse stands to lose a couple of clients and perhaps will lose ground in its next quarterly earnings statement from the fine (in general terms, this means that corporate fines get paid by the company’s shareholders). But there will be no major consequences for a bank that assisted in tax evasion for decades. As for the bankers who authorized and carried out the scheme, chief executive Brady Dougan and chairman Urs Rohner will keep their jobs, with the board of directors having decided that they weren’t responsible for the practices. As I mentioned, in 2011, the Justice Department indicted eight Credit Suisse bankers in connection with the case, but none of them ever faced trial, instead living freely in Switzerland. In three years, the Justice Department never attempted extradition, stating plainly that Switzerland wouldn’t allow it. Under the New York Department of Financial Services order, three of the eight bankers, who incredibly were still on the payroll of Credit Suisse for three years after the Justice Department indictment, had to be fired by the company.

The fact that the Justice Department never even attempted extradition for Credit Suisse bankers or any other individuals they’ve indicted in connection with Swiss bank accounts and tax evasion schemes over the years reveals what has frustrated senators like Levin. Swiss laws are seen by the Justice Department as an impossible obstacle, regardless of what U.S. laws have been broken.

Along with the indictments, the Justice Department sent subpoenas to Credit Suisse in 2011, demanding the names of the bank’s customers whom they assisted with tax evasion. But three years later, Credit Suisse has only revealed 238 of its 22,000 account holders. Swiss law subjects any banker who reveals names on private accounts to fines and even imprisonment. They will only deliver names as part of bilateral treaty protocols, a slow process undermined by heavy evidentiary burdens implemented by the Swiss Parliament and its courts.

This is a dilemma for Swiss banks, but it’s unclear why the Justice Department should care about it, instead of putting its own pressure on Credit Suisse to deliver the names. Yet Monday’s plea deal did not lead to any more account holders being revealed. “It is a mystery to me why the U.S. government didn’t require as part of the agreement that the bank cough up some of the names of the U.S. clients with secret Swiss bank accounts,” said Sen. Levin in a statement. In 2009, Swiss bank UBS paid a $780 million fine over tax evasion and did reveal 4,700 account holder names. But in this case, Credit Suisse only had to agree to help with treaty requests and information on where accounts got transferred when the bank shut them down. So instead of getting the names, DOJ will have to scurry around and play the game of tracking them down with another bank, and so on.

Levin’s argument is that the government fails to use its most aggressive tools to force compliance on everyone associated with tax evasion, including those actually evading the taxes. Treaty requests lead to “this endless negotiation with the Swiss about their laws instead of implementing our laws,” Levin said at the hearing in February. And indeed, a recent action by the IRS shows that the administration has been less than maximally aggressive on fighting tax evasion. They delayed enforcement of a signature anti-tax evasion law for two years, as long as banks make a “good-faith effort” to comply. Under the law, foreign banks are required to turn over account names, but with the IRS implementing this hands-off strategy, we can expect little to come of it for a couple years.

To really see the disconnect here, consider that the National Security Agency has allegedly sucked up every phone call made in the Bahamas – a known tax haven – in cooperation with the Drug Enforcement Agency to interdict drug trafficking, but apparently with no cooperation with the Treasury Department or other agencies to fight money laundering or tax evasion. I don’t actually want the NSA to start tapping communications to find tax evaders, but the dichotomy does reveal government priorities. They will stop at nothing to fight the drug war, where the consequences fall mainly on minorities and the poor. But they pull their punches when it comes to criminal issues that affect giant corporations and the wealthy, like tax evasion.

Credit Suisse’s stock has increased since the announcement of the guilty plea. If this is what accountability looks like, I imagine other banks will want to sign up. Credit Suisse got to put its legal troubles over tax evasion behind it without any of its bankers put in jail, and without even having to break the confidence of its former clients by revealing their names. If Credit Suisse agreed to cooperate earlier, it could have avoided pleading guilty, and likely reduced its fine. But in the end, even with this supposedly damaging plea, Credit Suisse is merely inconvenienced with a cost of doing business. And until financial crimes result in something more than that, the crime wave will continue unabated.