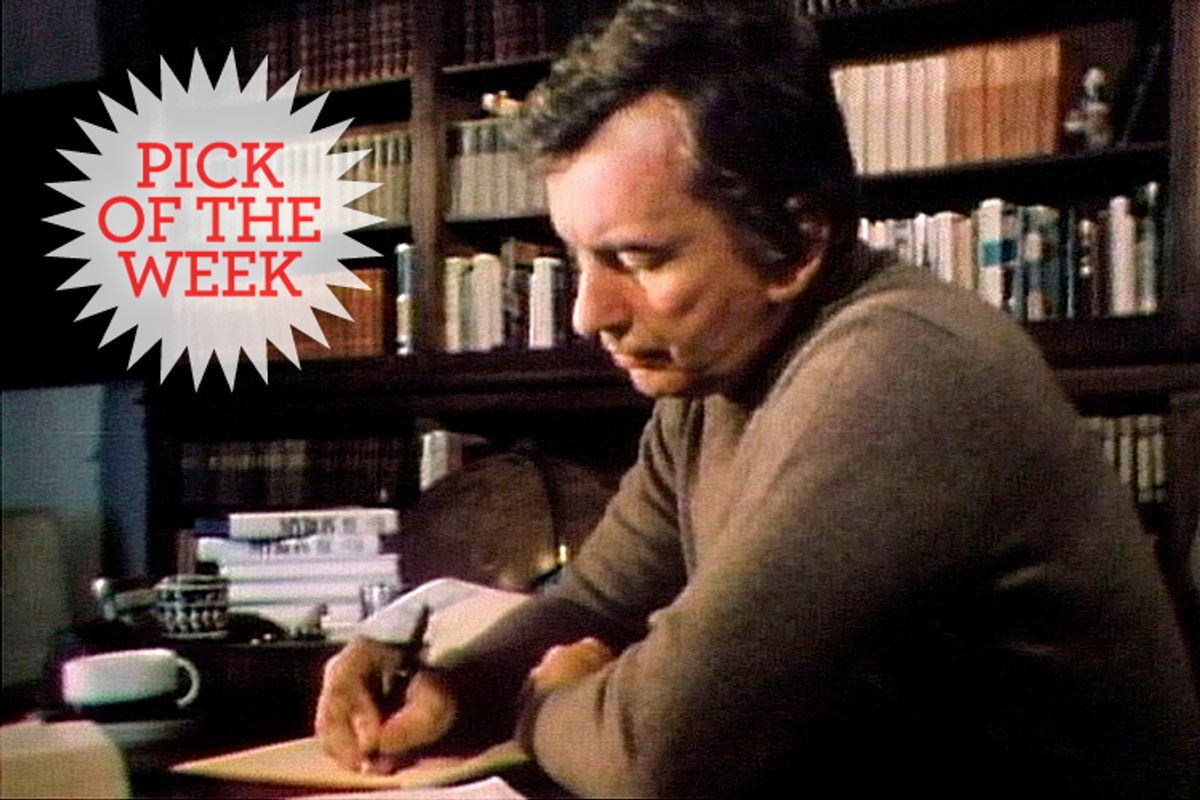 Every intellectual who tries to crack wise on television is emulating Gore Vidal, whether or not he or she knows it. Nicholas Wrathall’s documentary “Gore Vidal: The United States of Amnesia” is an unabashed love letter to its subject that captures how and why Vidal became one of the dominant public intellectuals of the 20th century, an heir to the tradition of Mark Twain and H.L. Mencken, and a fearless post-partisan scourge of American hypocrisy and corruption well into the Bush-Obama era. Perhaps without meaning to, the film also captures many of Vidal’s contradictions. Less than two years after his death, Vidal simultaneously looks like a creature from a bygone era, shaped by privilege, oppression and the refined self-hatred of pre-Stonewall gay identity, and like a bracing, cautionary example to all the certainty and sanctimony and stupidity of our time. Saying that we need a new Gore Vidal is both true and nonsensical; the precise combination of ingredients that made him who he was could only have come together when and where it did, and is not possible now.

At the height of his fame as a novelist, critic and bon vivant in the late 1960s, Vidal became the puckish left-wing sparring partner of William F. Buckley Jr., in a series of ABC News throwdowns that set the gold standard for all such future encounters. In one of the most famous moments in TV history – now a YouTube classic – the two nearly came to blows during a debate over the protests outside the 1968 Democratic convention in Chicago. After Vidal described Buckley as a “pro- or crypto-Nazi” (or possibly a “proto-crypto-Nazi”), the latter called Vidal a “queer” and threatened to “sock [him] in the goddamn face.” That was pretty hot language for network TV in those days – or any time, really – and there was the added comic attraction that both men were obvious Northeastern blue bloods with prep-school manners and patrician accents. It was as if the race for student body president at Phillips Exeter had boiled over into fisticuffs, and on the evening news. (Actually, only Vidal went to Exeter; Buckley attended the Millbrook School, a more modest and more progressive institution, believe it or not.)

Vidal won the exchange, in much the same way as his old friend Jack Kennedy had won the televised debate with Richard Nixon eight years earlier. Perhaps he had absorbed Marshall McLuhan’s nascent media theories and perhaps it was instinct, but Vidal retained a cool, amused demeanor while Buckley blew a gasket and descended to hate speech, for which he would later half-apologize. (He had been driven to the insult by his distaste for Vidal as “an evangelist for bisexuality,” Buckley wrote.) But there’s one more thing to notice about this legendary incident, which is that Vidal fought dirty even before Buckley did. God knows I don’t want to take William Buckley’s side against pretty much anyone ever, but Vidal surely understood that it was unfair to accuse his opponent of being a Nazi, even in jest. (An autocrat, an elitist or a monarchist, sure.) In fact, Vidal picked a vulnerable spot and stuck in the knife; he knew that Buckley had struggled to purge the reborn conservative movement of overt racism and anti-Semitism (as well as John Birchers and Ayn Rand libertarians) and would likely rise to the bait.

You can draw a variety of lessons from that episode and its ripple effect across many decades of pop culture. Most subsequent left-liberal or even radical critics (Vidal would have rejected any such label, by the way) strive to appear reasonable in pop-culture contexts, rather than just sticking the boot in for maximum effect. Vidal never cared about seeming reasonable, and relished entertaining positions or ideas that horrified mainstream commentators of all stripes. (He explored conspiracy theories about both the Oklahoma City bombing and the 9/11 attacks, for example, although he stopped short of endorsing them.) In that sense, his would-be heirs can be found all over the ideological map, from Steven Colbert to Bill Maher to Glenn Beck, who is like the numb-nuts right-wing lower-middle-class hetero version, with the 1940s liberal-education reading list replaced with 1990s political-religious gobbledygook. (I’m not entirely kidding about that; both Vidal and Beck were autodidacts and self-invented characters who never went to college.)

But the Buckley contretemps also suggests some of the ways Vidal was a dark and occluded personality, one of the most brilliant minds and sharpest cultural critics in our history and perhaps his own worst enemy. Wrathall’s most obvious audience for this film is children of the 1960s and ‘70s who can dimly recall the events in question, and will respond to this nostalgic voyage into the cultural realm of our parents’ generation, at once antiquated and avant-garde: There is the drunken Norman Mailer, being berated by Vidal and Dick Cavett on late-night TV. There are Federico Fellini, Mike Wallace and a Gabor sister, at a party at the Italian seaside villa where Vidal lived for several decades with Howard Austen, his longtime partner. But the film will have done its work best if it reaches at least some younger people of the Snowden-Occupy generation, who may need to know that ferocious resistance to American empire – and for that matter a refusal to conform to norms of gender and sexuality – were not invented yesterday.

Wrathall’s film has extensive interviews with Vidal during the last several years of his life, and includes an immense amount of vintage file footage from all phases of Vidal’s career. This goes all the way back to a 1936 newsreel of 10-year-old Eugene Vidal Jr. flying an airplane built by his father, an engineer and inventor who was then an aviation official in the Roosevelt administration (and apparently the lover of Amelia Earhart, a gender rebel on her own terms). Young Vidal ditched the "Eugene" for "Gore" a few years later, in tribute to his beloved grandfather Thomas Gore, who was probably the first blind person to serve in the U.S. Senate. (Vidal and Al Gore were distant cousins.) It strikes me that this upper-crust rebel decided, consciously or not, to deal with his sexuality as his grandfather had dealt with disability – an obvious deficit in the eyes of the world, but never as a factor that defined his identity, still less an excuse for lack of accomplishment. Vidal never described himself as gay, never spoke out about the HIV/AIDS epidemic and to the end of his life avoided any public association with the gay community or the LGBT political struggle. He reluctantly called himself bisexual on occasion, but only within the context of insisting that everyone else was too.

Both he and Buckley understood the epithet “queer” to be a scurrilous insult, of course, but if Vidal was partly a throwback to the old-fashioned shame of the closet, he was also a rebel trying out an early version of what might be called "queer" sexuality by today's radicals. According to Vidal, his relationship with Austen was not sexual, and they both slept with whomever they wanted to. Vidal had female lovers at least occasionally (reportedly including Anaïs Nin and Joanne Woodward!), and may have had an illegitimate child in Florida. Since Wrathall relies entirely on the testimony of Vidal and his closest friends, we don’t get all the juiciest gossip; according to biographer Tim Teeman, Vidal had sex with any number of Hollywood and literary figures, including Jack Kerouac, Fred Astaire, Dennis Hopper and Brad Davis, who later contracted HIV and died of a drug overdose. We also don’t hear anything about Vidal’s uglier attitudes about homosexuality. Vidal’s literary executor and close friend Jay Parini appears in the film, but does not repeat the things he told Teeman, including that Vidal frequently derided gay men as "fags" in private, and that Parini came to think of him as "self-hating." It's slightly reminiscent of Roy Cohn's character in "Angels in America," assuring his doctor that he was a heterosexual who had sex with guys.

This bitterness was probably connected to the fact that Vidal’s personal interest in sex with men (however he defined it) derailed his literary career and sent him into exile, first to Hollywood to write movies and TV shows and then to Europe. His debut novel, a taut tale of nautical adventure called “Williwaw,” published when he was 21, was a smash hit. Then came the explicit homoeroticism of “The City and the Pillar,” published in 1948 and received by the New York establishment as an outrage. Difficult as this is to imagine, Times critic Orville Prescott issued a fatwa against reviewing Vidal’s books that endured for 20 years. Although Vidal returned to fiction many times, writing the gender-bending farcical bestseller “Myra Breckinridge” and a series of laborious, agenda-driven historical novels, he was effectively barred from membership in the all-male Great Postwar Novelists club that included Mailer, Saul Bellow, Philip Roth, Kurt Vonnegut and so on.

Being pink-listed evidently did nothing to improve Vidal’s cantankerous personality or relieve his internalized homophobia. In his late interviews with Wrathall, Vidal still cherishes his ancient feuds with Buckley, Mailer, Truman Capote and numerous others. He never made up the split with his onetime acolyte Christopher Hitchens after the latter’s apostasy on the invasion of Iraq. In an interview conducted shortly before his own death, Hitchens comes to the edge of tears, which is something Vidal would never have let an outsider witness. But it’s also possible that Vidal’s exclusion from the inbred world of literature set him free to say outrageous things on television, to run unwinnable political campaigns, and to launch Wildean bons mots and brilliant broadsides against the greed, corruption and mendacity of America from his hillside above the Amalfi coast. Vidal's sarcastic, unforgiving and relentlessly eloquent essays, especially as collected in the volumes "United States" and "The Last Empire," hold up better than his novels. (In the film, Vidal’s commentary on election night in 2008, that high-water mark of recent political idealism, is worth the price of admission all by itself.)

There are other cultural critics who can write serious, long-form essays that fly in the face of orthodoxy and challenge the entrenched stupidity of conventional wisdom, but Vidal’s were better, deeper, funnier, more challenging and surprising than almost anyone’s. I recently reread his Vanity Fair article about Timothy McVeigh from September 2001 (the date alone will tell you why it was quickly forgotten), and even with its forays into conspiracy theory, it’s the most cogent summary of what we really know about that entire sordid episode (not nearly enough) and the multifarious lies we told ourselves about it. Liberals who are still aboard the Bill and Hillary Clinton love train – you guys seriously need to read that.

There are also plenty of people who are quick on the draw, who can puncture an adversary with a snappy comeback or a moment of drawling folksy parody. But they’re hardly ever the same people, and Vidal was funnier and sharper than almost all of them too. He was once on TV with the English novelist Richard Adams, who told him his work was “meretricious.” “Pardon?” asked Vidal. “Meretricious,” Adams repeated. Vidal laughed heartily. “Well, meretricious to you,” he said, “and a Happy New Year.”

"Gore Vidal: The United States of Amnesia" opens this week in New York and June 6 in Los Angeles, with other cities and home video to follow.