The WaPo critic's argument was swallowed by kneejerk anti-feminism and Hollywood egotism. But it merits considering 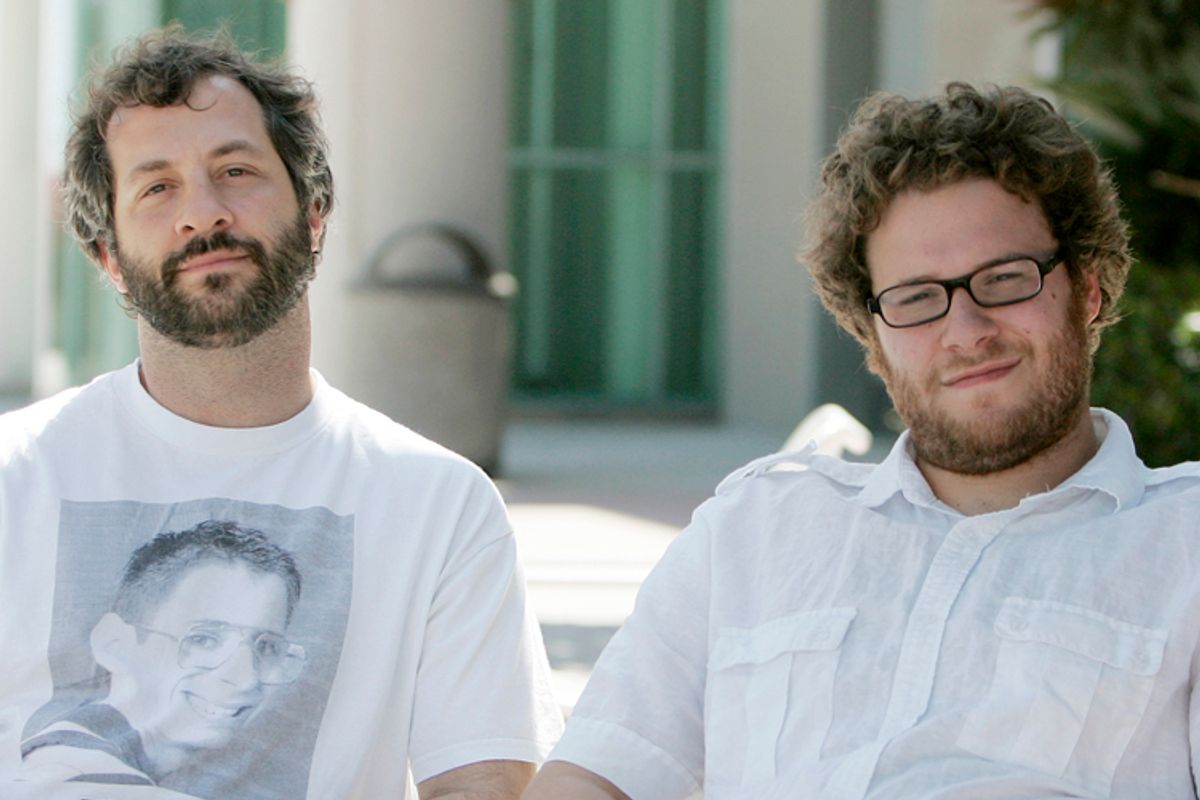 Did a prominent film critic blame Seth Rogen and Judd Apatow for the deranged fantasies of Elliot Rodger, the young man who apparently perpetrated a killing spree last Friday in Isla Vista, California? If you encountered Rogen and Apatow’s Twitter responses to a provocative essay published on Sunday by Washington Post critic Ann Hornaday, along with the forest of social-media commentary and meta-news coverage that followed, it might seem that way. The “Twitter war” itself – two famous and beloved entertainers vs. an intellectual critic with feminist inclinations who writes for a pillar of establishment journalism – became the story, and that’s a conflict that by definition has no winners.

Before long we had all the highlights of social-media debate: Patton Oswalt cracking wise about how the media trolls for clicks, feminists calling out Rogen and Apatow for white male privilege, and random dudes poisoning the water, random-dude style, by blaming gays and liberals and hurling misogynistic insults at Hornaday. I’m often inclined to believe that we get the public discourse we deserve, and in this case it stemmed from a collective unwillingness to consider the complicated argument Hornaday was trying to launch about the power of cinema and the way it shapes our self-image, our emotional life and our understanding of human relationships. That argument completely disappeared beneath oversimplification, knee-jerk anti-feminism and Hollywood egotism, but it’s worth serious consideration.

I should be clear that I know and like Ann Hornaday. But this isn’t about having a friend’s back; Ann can definitely take care of herself. This is about the idea that the images and stories we consume matter, that they affect us profoundly, although not always in ways we can see and rarely or never in some clear cause-and-effect fashion. That idea is what Hornaday is struggling with here, and it’s an idea we confront over and over again, in slightly different forms, after every one of these mass shootings that seems to have been deliberately designed by its perpetrator as a media spectacle. For Seth Rogen to boil all that down, for his 2 million-plus Twitter followers, to “@AnnHornaday how dare you imply that me getting girls in movies caused a lunatic to go on a rampage” is a black-comic example of movie-star narcissism. (I originally wrote that Rogen's phrase about "getting girls" sent an unfortunate signal, and it rubbed a lot of other people the wrong way too. Various commenters have correctly observed that Hornaday put it exactly the same way, so let's chalk that one up to the endless game of Telephone that is the Internet.)

In fact, Rogen pretty much made Hornaday’s point for her, which is that men in the movie world (or the regular world, for that matter) don’t care to listen to feminist criticism, and treat the intensely gendered nature of mainstream entertainment as a neutral or natural fact with no significant consequences. Here’s a fact many people haven’t noticed: Hornaday never mentions Rogen by name, and never blames him or his movies for anything. She brings up his recent hit “Neighbors” as an example of the “outsized frat-boy fantasies” from which Rodger apparently felt excluded, and no doubt Rogen is Exhibit A when it comes to “Judd Apatow comedies in which the shlubby arrested adolescent always gets the girl.” But in any fair-minded reading of her piece, those are instances of a troubling cultural pattern that supplies a context for Rodger’s crimes, not any sort of explanation.

Hornaday begins with the inescapable fact that the final YouTube video made by this troubled child of Hollywood, in which Rodger vowed to take his revenge on the women and men who had rejected or humiliated him, looks like a movie. It was “remarkably well-made,” she notes, “with palm trees in the background and [Rodger’s] face bathed in magic-hour key light.” Not only that, Rodger was clearly performing for the camera, in a way that simultaneously suggests a grave personality disorder and a consciousness shaped and defined by media consumption. “With his florid rhetoric of self-pity, aggression and awkwardly forced ‘evil laugh,’” Hornaday goes on, “Rodger resembled a noxious cross between Christian Bale’s slick sociopath in ‘American Psycho,’ the thwarted womanizer in James Toback’s ‘The Pick-Up Artist’ and every Bond villain in the canon.”

There’s an unspoken question here: What is the relationship between the disordered or disturbing elements of media spectacle and the pathological, murderous play-acting of someone like Elliot Rodger, an evidently ill person who may have had difficulty distinguishing reality from fantasy? It’s an intriguing question in an era when murder rates overall have trended sharply downward to near-historic lows, but one in which spectacular mass shootings on the Aurora-Newtown-Isla Vista model occur with distressing frequency. If we buy Freud’s famous maxim that insanity is just an exaggerated version of normalcy, perhaps Elliot Rodger was acting out, on the real streets of a real town, the kinds of murderous fantasies many “normal” people are content to consume in private. But Hornaday never claims to know the answer to this question, and neither argues nor implies that the movies she mentions “caused” Elliot Rodger to act as he did.

Hornaday’s real point – and the one that really got under people’s skin, I suspect – has to do with the peculiar and unhealthy gender dynamics of mainstream American cinema, a decade and a half into the 21st century. While the demographics of movie audiences have shifted along with the general population, San Diego State researcher Martha Lauzen reports that 84 percent of the directors, writers, producers, cinematographers and editors behind the 250 top-grossing films of 2013 were men. (Although we don’t have numbers on this, we can safely assume that those guys were disproportionately white men over 50.) Lauzen’s numbers have budged only slightly over the last 20 years, and the usual response from Hollywood defenders is to shrug them off: The business is a meritocracy, or at least a money-ocracy. If and when movies made by and about women start being massively profitable, we’ll see a lot more of them.

Many people in Hollywood accept that logic, men and women alike, which leads to female-centric hits like "Bridesmaids" and "The Heat" being embraced as signs of progress. But that framing overlooks the extent to which American movies have become a self-reinforcing system driven by white male executives and producers convinced that they know what the audience wants, and also the extent to which they are, in a sense, correct: The audience has been conditioned, over the decades, to expect a certain kind of male-oriented stimulus and spectacle, a cinematic grammar of "violence, sexual conquest and macho swagger," in Hornaday's phrase. One could go so far as to say that mainstream cinema is a gendered cultural form, something that Oscar-winning pioneer Kathryn Bigelow, director of the controversial action films "Zero Dark Thirty" and "The Hurt Locker," understands and has turned to her advantage.

One or two or five movies in which a Seth Rogen or Jon Favreau type wins the devotion of a young woman who resembles a Victoria’s Secret model might be winsome romances, but any regular moviegoer recognizes the pattern, which we see repeated by the dozen. Rodger’s disturbing final video expressed what Hornaday calls “the toxic double helix of insecurity and entitlement that comprises Hollywood’s DNA,” a symbolic universe “whose escapist fantasies so often revolve around vigilantism and sexual wish-fulfillment.” Rodger felt himself barred from the latter fantasy, so he indulged in the former.

Did Seth Rogen make him do it? Of course not! Hornaday could perhaps have chosen better examples, but by getting all butt-hurt by an article that did not blame him for anything and in which he was never mentioned, Rogen became an inadvertent illustration of Hornaday’s argument about clueless masculine self-involvement. As for Elliot Rodger, he was no doubt battling demons the movies did not cause and could not heal, but I feel the same way about him as I did about Aurora shooter James Holmes, whose choice of a “Dark Knight Rises” screening was no more accidental than was Rodger’s slick, Hollywood-flavored video. Their spectacular crimes were not caused by movies, but both men imagined their spectacular crimes as movies, and we haven't figured out what that means.