Gwyneth Paltrow: Tone-deaf, even about trolls 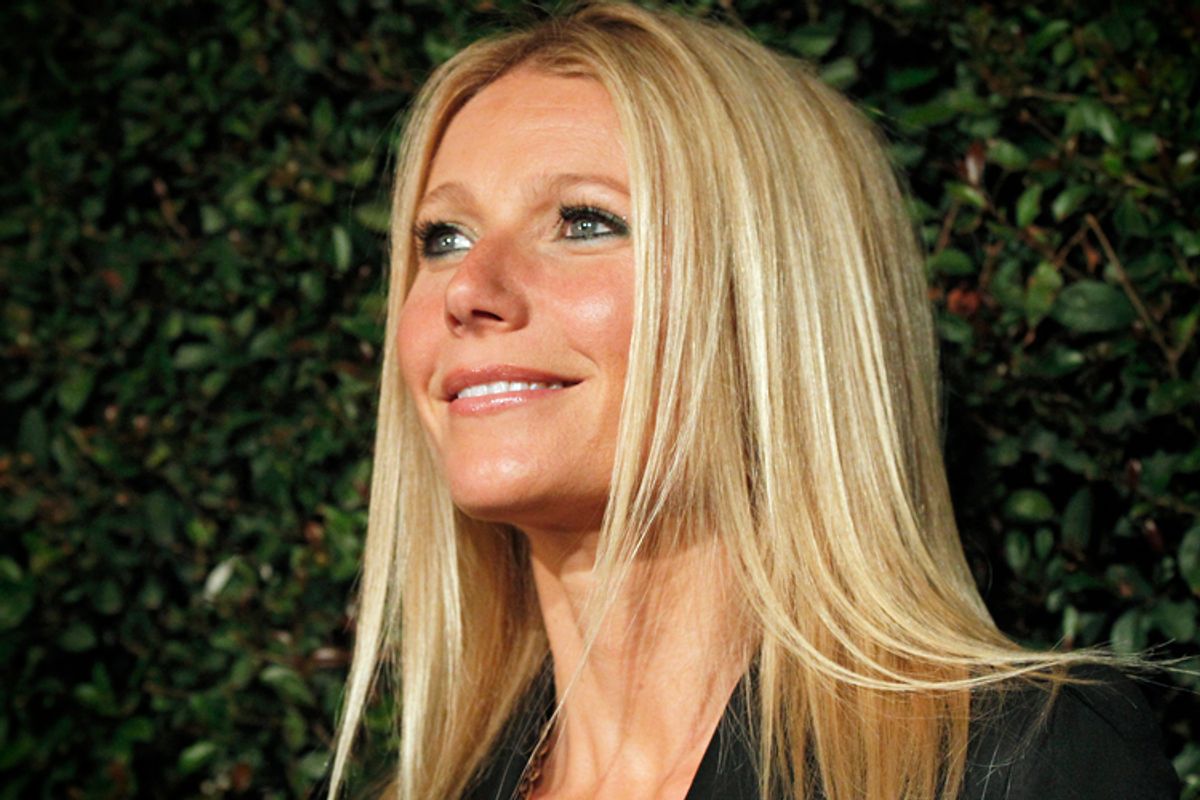 The Internet has never been especially kind to Gwyneth Paltrow, the easily mocked aspirational guru of overpriced cleanses and $1,200 napkin sets. But no matter how many Marie Antoinette comparisons she's endured (perhaps because she knows where you can get your heraldry?), no matter how often her name has been linked to the words "tone deaf," she's always seemed to sail serenely beyond it all, a woman too busy ordering organic wine in flawless Spanish or shopping for the "essential" $400 parka or I don't know, something something detox, to care what the little people think. But lately it seems the trolls have been getting her down.

Earlier this month, the recently uncoupled mother of two hit back at critics who'd taken umbrage with her comments that "It's much harder for me" to parent as an actress because office work is "routine and, you know, you can do all the stuff in the morning and then you come home in the evening." On a post for Goop, she wrote that her remarks were "somehow [...] taken to mean I had said a 9-5 job is easier, and a lot of heat was thrown my way, especially by other working mothers who somehow used my out-of-context quote as an opportunity to express feelings (perhaps projected) on the subject." Now, at an unannounced appearance at the Re/Code's Code Conference this week, she's gone even further.

"At a certain point when you've been made fun of and excoriated and dragged through the mud ... for 20 years ... you realize it's not really about you," said Paltrow -- who earlier this year was the subject of an anonymous claim on Whisper that she was cheating on her now soon to be ex-husband Chris Martin.

Paltrow went on to say that "The Internet is an amazing opportunity, socially. We have this opportunity to mature and learn, which is the essence of being on earth — to being the closest person we can be to our actual, real, truest self. But the Internet also allows us the opportunity to project outward our hatred, our jealousy. It's culturally acceptable to be an anonymous commenter. It’s culturally acceptable to say, ‘I’m just going to take all of my internal pain and externalize it anonymously….' It's taken me a long time to get to the point where I can see these things and not take it as a personal affront and a hurt. I see myself as a chalkboard or a whiteboard or a screen, and someone is just putting up their own projection on it… You come across [online comments] about yourself and about your friends, and it's a very dehumanizing thing. It's almost like how, in war, you go through this bloody, dehumanizing thing, and then something is defined out of it."

You will never have to sell me on the idea that the Internet is chock-full of horrible people who say terrible things. You will never have to convince me that, as Caitlin Moran says, the comments section is where all of the world's unhappiness dwells. And it makes me demoralized but unsurprised that Paltrow says that when a celebrity friend posted a photo on Instagram, an anonymous person responded with the wish to "rape and disembowel" her. But it's still amazing how Paltrow, whose title for the Code Conference was "actor/author/lifestyle activist" consistently manages to be off-putting even when she's talking about things many of us would strongly agree with.

There's not a word in what's been quoted of Paltrow's speech that includes any mention about the people whose lives have been genuinely ruined and sometimes outright lost because of online bullying and harassment. There's not an inkling that she has a sense of how terrifying and toxic the worst aspects of online culture can be for people who aren't patrician millionaires. It's instead just another opportunity to explain away her critics with words like "jealousy" and "projection." She says she's been "made fun of," but she's doing it in the same speech in which she uses words like "unhealed" and "the next level of conscience" and "newish paradigm" and "emotional evolution," a talk in which she compares getting trolled to living through a war, and talks about what qualifies as the "essence of being on earth." I mean, Christ, that's just insufferable.

No one deserves to be abused, whether they're a shy middle schooler or a blond Oscar-winner. But when you put yourself out there as a "lifestyle activist," you should be able to acknowledge the difference between bullying behavior and legitimate criticism. And you should be able to do better than give a speech about the ugliness of online commentary that isn't quite so arrogantly haughty or self-absorbed. Because that's unevolved too.