It's John Green's world now -- and that's a good thing

How "The Fault in Our Stars" author conquered YA and beyond 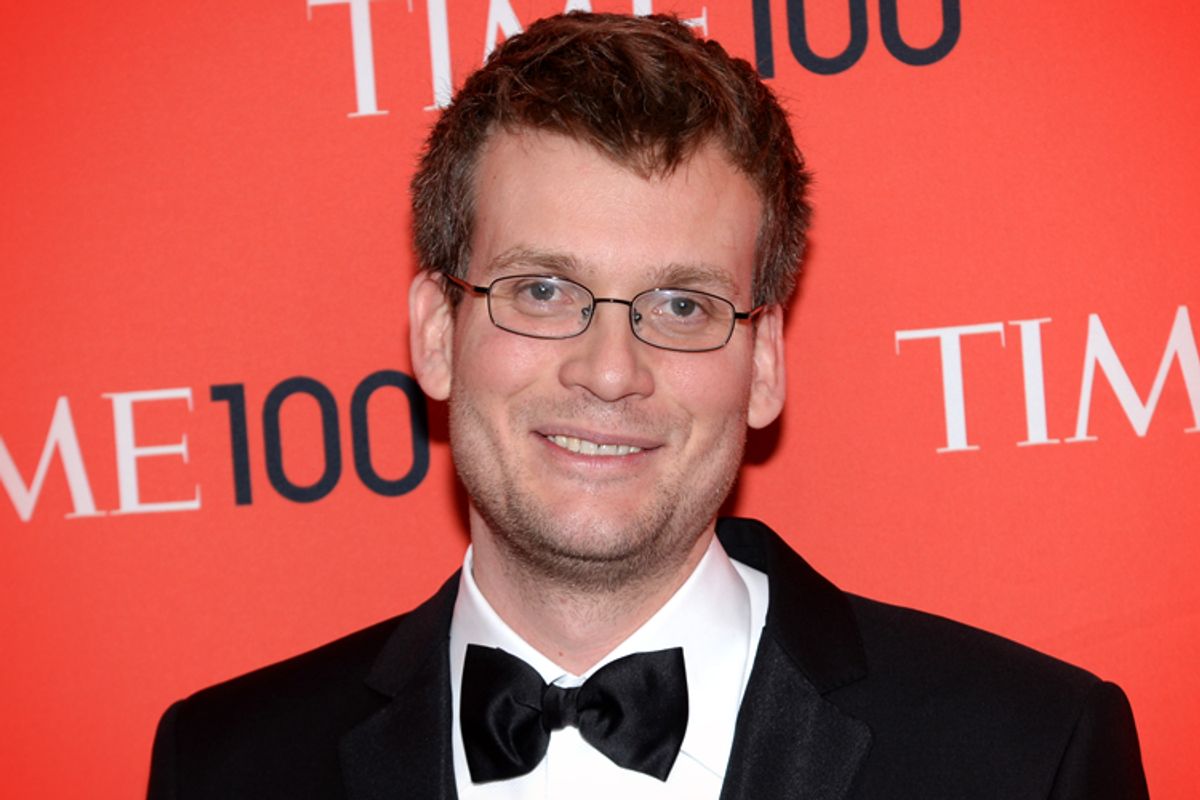 "That's 39," my 14-year-old daughter, Lucy, said; "40. 41. 42." She was counting the shirts -- and it was steady work. If you, like my daughter and me, happened to be among the 10,000 BookCon ticket buyers at the Jacob Javits Center on Saturday or the several more who were guests and vendors there for BEA, you could not have ignored the dominant color theme among the crowd. A bright shade of blue across the T-shirts bobbing everywhere in the sea of humanity, just the shade of a particular book jacket. It was "Fault in Our Stars" cerulean. Because at BookCon – as everywhere else now – it's John Green's world.

Green, the author whose smash YA novel about two teens who meet in a cancer support group hits the big screen this week, is not perhaps at first glance the sort of person who could inspire more slavish fandom than an entire army of Harry Styleses -- as well as a lengthy, glowing profile by Margaret Talbot in the new issue of the New Yorker and a place on Time's list of 100 most influential people. He is a bespectacled 36-year-old who worked as an apprentice chaplain at a children’s hospital and briefly enrolled in divinity school before turning to novel writing. He talks very quickly and ruffles his hair on a near constant basis. Each week, he and his brother Hank make videos in which they talk sort of to each other and very much to everybody about whatever subjects appeal to the brainy minds at the time. (Green's explanation of healthcare costs – not a subject generally among the obsessions of teenage girls – is a YouTube legend, with close to 6 million views.) Together they have created an entire community known as Nerdfighters, who in addition to being self-identified nerds, collaborate on numerous endeavors to "decrease world suck" -- including small loans to entrepreneurs in the developing world, making art and posting educational videos on a wide variety of topics. Last week, for instance, Green vowed to auction off his World Cup support to fight sarcoma, describing it as not just the disease that Augustus Waters has in his bestseller but something that "real people have and it sucks and I hate it." In short, Green seems like a very nice person, an author beloved by the very devoted community of YA fans. But what he is, in fact, is a titan, a man who on Saturday inspired waves of mass sobbing among the overflowing crowds of girls in "Okay. Okay." shirts who didn't get into his BookCon panel, who were left to despairingly trudge over to try to catch the dystopia panel instead.

What is it about Green that's made him such a phenomenon? Much of it is, of course, that bestselling book. That beautiful, ugly-cry-inducing book. No wonder the entertainment community, sensing a cancer-is-the-new-vampires trend, is hot to cash in on the "youth with disease" thing. Next week, ABC Family is premiering "Chasing Life," a series about a young woman suddenly facing a serious cancer diagnosis, and next fall, Fox will debut "Red Band Society," a drama about teens in the pediatric ward of a hospital.

But just because you put some young people in a hospital, it doesn't mean you know what to do with them. I confess that when Lucy brought "TFIOS" home two years ago, I wasn't sure I wanted her reading it. Our family had plenty of personal experience with cancer and cancer support groups; I didn't know if my then 12-year-old was ready for a novel that touched so deeply on those themes. But she devoured it, hungrily, gratefully, sharing it among her friends with a passion I'd only seen once before – for Harry Potter. I read it too, and let it wreck me in the good way, with its startling, unsentimental humor and its gut-punching understanding of what a merciless bastard cancer truly is. It was a book for people who love books, a book about two kids who fall for each other over not just their common experience of disease but their intense fixation on a novel and its author. It was a book that straightforwardly acknowledged, in a manner that grown-ups often stumble over, that young people experience sickness and grief, and made those experiences open and real. It had, as Lucy would put it, all the feels.

If John Green were nothing but the person who wrote that book, he'd undoubtedly have a devoted following. But though Green, who in the New Yorker calls himself a former "genuinely poor student," may be a man who knows how to rouse a crowd by telling them that his next novel will be a "Sherlock" fanfic with a "Doctor Who" angle, he is also a skilled master of connection. With his exhausting number of online projects, he's a writer who also knows intuitively how to be a leader, happy to use his platform to educate and to motivate. His fandom is its own unique community, full of members who've come to encourage and support each other as much as the man at their center. And let me tell you, that is goddamn priceless.

There's an easy and prevailing notion that teens – and teen girls in particular – are shallow narcissists, too busy Instagramming their selfies and engaging in mean girl power plays to see the world beyond the tips of their manicures. They are underestimated and oversexualized and diminished and demeaned. But you know what girls want? What we all do. To be seen and heard and understood. Green looks at them and sees an audience that's smart and questioning and creative and weird and bubbling with the desire to do good in the world. He respects them. That's why they love him and they love the community he's helped build for them. That's why I'd happily let my daughter wait for hours in a basement of the Javits Center to hear him speak. The legions may have to accept that he's a star now. But he's our star.

John Green The Fault In Our Stars Ya Young Adult