I'm not pimping your hate read

How do we talk about toxic media without encouraging it? 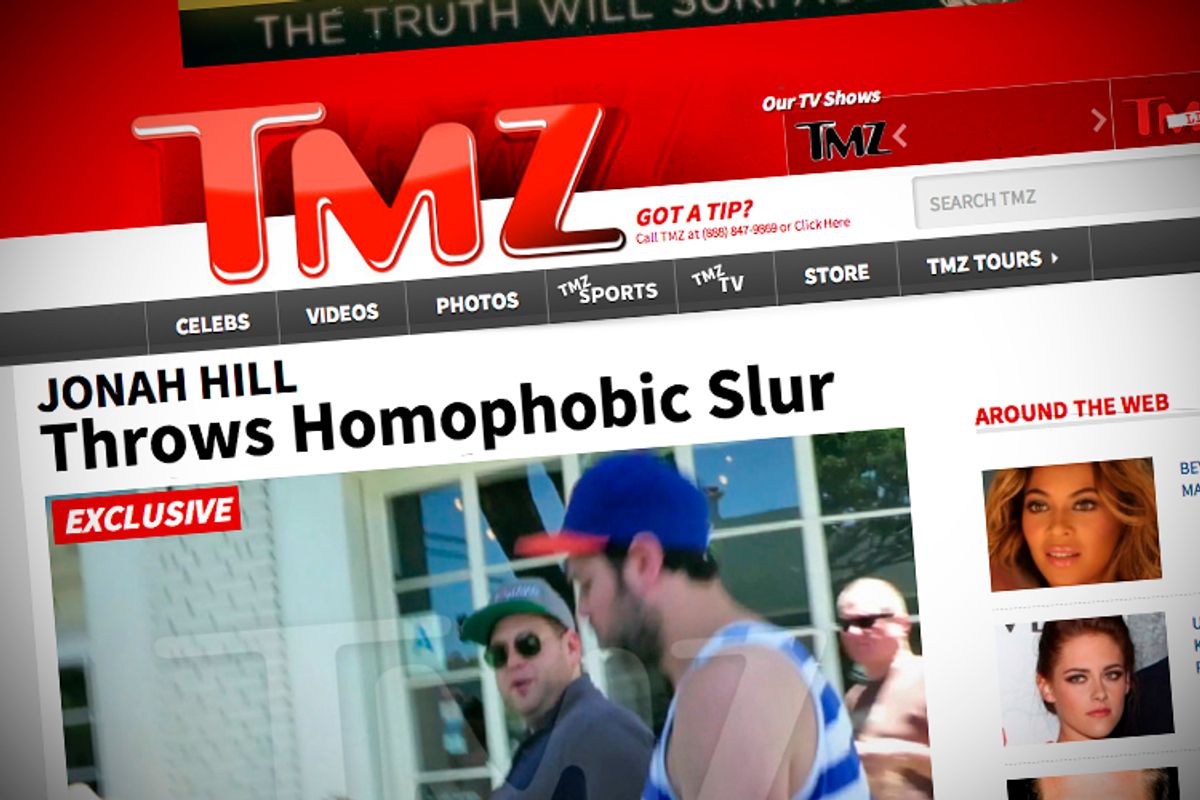 I'm not going to link to that TMZ story. I'd like to talk about what happened with  Jonah Hill on Tuesday, and how while I absolutely believe there is no reason ever to use that kind of language on anyone, I also think it's clear the paparazzo who tailed him and got in his face for several blocks was hoping to provoke just that sort of outburst. I'd like to talk about how laughable it is that the man pursued Hill, got in front of him while he was walking, and then immediately called Hill "a real bully" when the actor angrily told him to "Suck my dick, you faggot." I'd like to talk about an incident in which Hill was an ignorant dope but is not the only wrongdoer. But what I'd like to do even more right now is not drive traffic to the site that actually helped create this whole entire stupid episode, and is now sitting back and enjoying the page view fruits of its own whipped-up drama.

I've been thinking about these things a lot lately. I consume an ungodly amount of media every day, quite of lot of which is strategically infuriating. And I often write about these things, because I truly want them to be better. I especially want pundits and writers and news reporters to do better when it comes to how they speak about women, minorities and LGBT persons. And I struggle with how to responsibly talk and write about the more toxic aspects of the media without aiding and abetting them.

I've thought of these ethical questions throughout my career. When people who have the power of a platform misuse it, we should hold them accountable. The old "Why don't you ignore them?" argument doesn't do much to change the crap that passes for public discourse, in ostensibly respectable publications like the Wall Street Journal as well as bottom-feeding tabloids like TMZ. When anybody at any level tries to pass off garbage as journalism, we should make a lot of noise. The challenge is how to do it in a non-hate read-feeding manner.

I reached a turning point a few weeks ago, when I wrote a story that heavily referenced a recent magazine piece as an example of an area of the media that could use improvement. That afternoon I received an email from the magazine's publicist, tersely stating that she'd appreciate if we linked directly to the story I'd mentioned. Aside from the fact that, as a matter of fact, I had (note to publicists: it's called hypertext), the request struck me as pretty brazenly entitled. How dare I, the subtext seemed to be, mention their obvious attempt at trolling for attention without then making it easier for our own readers to give it to them? How dare I not drive traffic to their site? I deleted the email unanswered. Two days later, she sent another, more forcefully worded one. I deleted that one too. Because I don't work for her.

That episode had come not too long after another site, when I'd mentioned a truly offensive article it had run, shot back with what appeared to be an attempt to drum up a public feud. And it all got me thinking, as I often do, about what Anil Dash described earlier this year as "being mindful of whose voices I choose to amplify." So when I wrote last week about the news sites that rushed to scapegoat UCSB shooter Elliot Rodger's childhood crush, I mentioned them by name but I didn't link to them. It wasn't hard, and it felt remarkably satisfying. In the days that followed, when I quoted ridiculous HuffPo or Daily News headlines on Twitter, I freed myself from the obligation of linking to them. Also surprisingly enjoyable.

I have always liked the footnotes and the citations and links. I love the off roads of news and information. But I'm going to try, moving forward, to be more selective about how I cite the more obvious click baiters. And I'm going to think twice before I post a "Would you look at what this clown at the National Review said?" message on Twitter or Facebook that provides an easy gateway to said clown's story. I want to be part not just of Anil Dash's culture of amplification but simultaneously of turning down the volume as well. I will press on imperfectly, and continue to question what legitimately merits attention and what does not. But if you want to drum up hate traffic to your site, go troll somebody else.