The "Fault in Our Stars" star "fully stands by" her quote 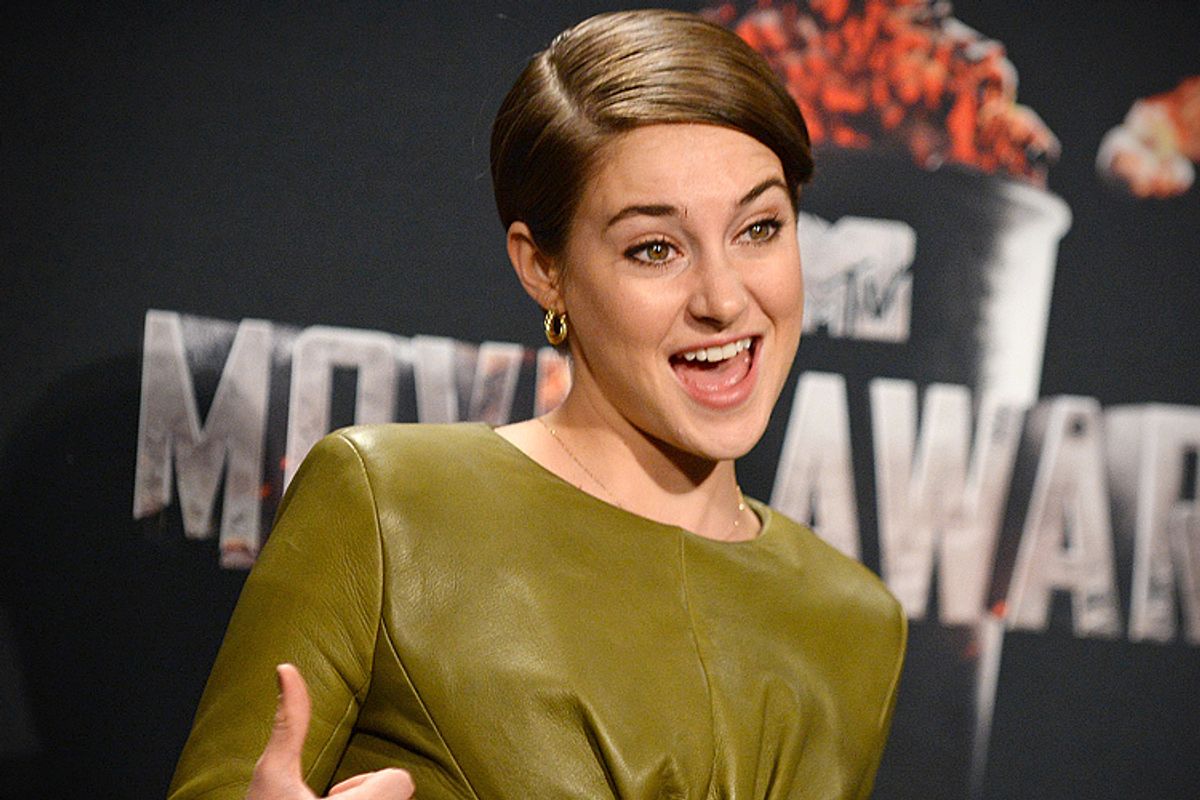 Celebrities: If you don't want to identify as a feminist, that's your business. But is too much to ask that you understand what a feminist is first?

Last month, in an interview with Time, "Fault in Our Stars" star Shailene Woodley faced the inevitable question that anyone who's successful and female – or mysteriously enough, Pharrell -- is confronted with at one time or another: "Do you consider yourself a feminist?" Woodley raised all kinds of hackles by replying, "No, because I love men, and I think the idea of ‘raise women to power, take the men away from the power’ is never going to work out because you need balance ... And also I think that if men went down and women rose to power, that wouldn’t work either. We have to have a fine balance. My biggest thing is really sisterhood more than feminism. I don’t know how we as women expect men to respect us because we don’t even seem to respect each other." Woodley has since said that the quote about men was "not actually the way I said it," although she also "fully stands by it."

Though numerous feminist writers swiftly stepped in to note that the definition of feminism is not "man-hating. Power-taking, lady-disrespecting ogre" but more like, "equal pay and reproductive autonomy liking and sexual abuse not having person," a new interview with Woodley in the Daily Beast shows the actress still stands firm.

Writer Marlow Stern sympathetically tells Woodley that "If you say you’re not a feminist these days, the pitchforks come out — and that you were being set up by someone who came into it trying to burn you on that," because, yes, we feminists love our pitchforks and torches – or what regular people like to call reasonable arguments. And Woodley responds, "The word 'feminist' is a word that discriminates, and I’m not into that. I don’t think there has to be a separation in life in anything. For me, bringing up the whole 'sisterhood' thing was about embracing each other’s differences. Embrace my point of view even if it’s different from your point of view, but see that our end goal is the same ... Labels are for other people to understand us, so for me, I know how I feel and I don’t need to call myself a 'feminist' or 'not a feminist' because I know what my truth is. If you need in your own mind to say that I’m a feminist so you better understand where I’m coming from and what my ideals mean, then that’s for you. Labels are for people to understand one another, not for us to understand ourselves. I know where my cayenne sits in my spice cabinet. You can go and label each distinct spice, but I know what my flavors are." She further tells Entertainment Weekly Radio's "Women on Pop" this week that "Any sort of label segregates. There's a line between between people ... and I don't abide by any of that."

Feminism is not the same thing to all people, which is why, by the way, we've been having vigorous debates for the past several decades of what does and does not constitute feminism. And many of us find the celebrity gotcha "Do you consider yourself a feminist?" question a lazy form of controversy drumming up, because either way the response is bound to tick off a portion of your audience.

But if on a fundamental level you philosophically disagree with the basic ideals of moving toward a gender equitable culture, then, as Woodley herself advises, I can embrace your point of view even as I disagree with it. But honest to God, if you're saying no to feminism because you think liking men excludes you from the club, you need to educate yourself. If you think feminism "discriminates," you're incorrect on a fundamental level. It's kind of like saying you're not a vegetarian because you wouldn't want to give up gluten. It's nonsense.

Ironically, Woodley's argument that she doesn't want to embrace feminism because she doesn't like labels is a tidy explanation of why labels are great. She says that she doesn't need them because she knows where her spices are. But trust me, one day you're reaching for the cinnamon and without one of those handy label things on the jar, you grab the cayenne instead, and you've just made the world's worst apple pie. Or, if you're Shailene Woodley, just a really bad argument.

Feminism Shailene Woodley The Fault In Our Stars