An Irish Catholic orphanage hid the bodies of 800 children

What happened to the children of "The Home"? 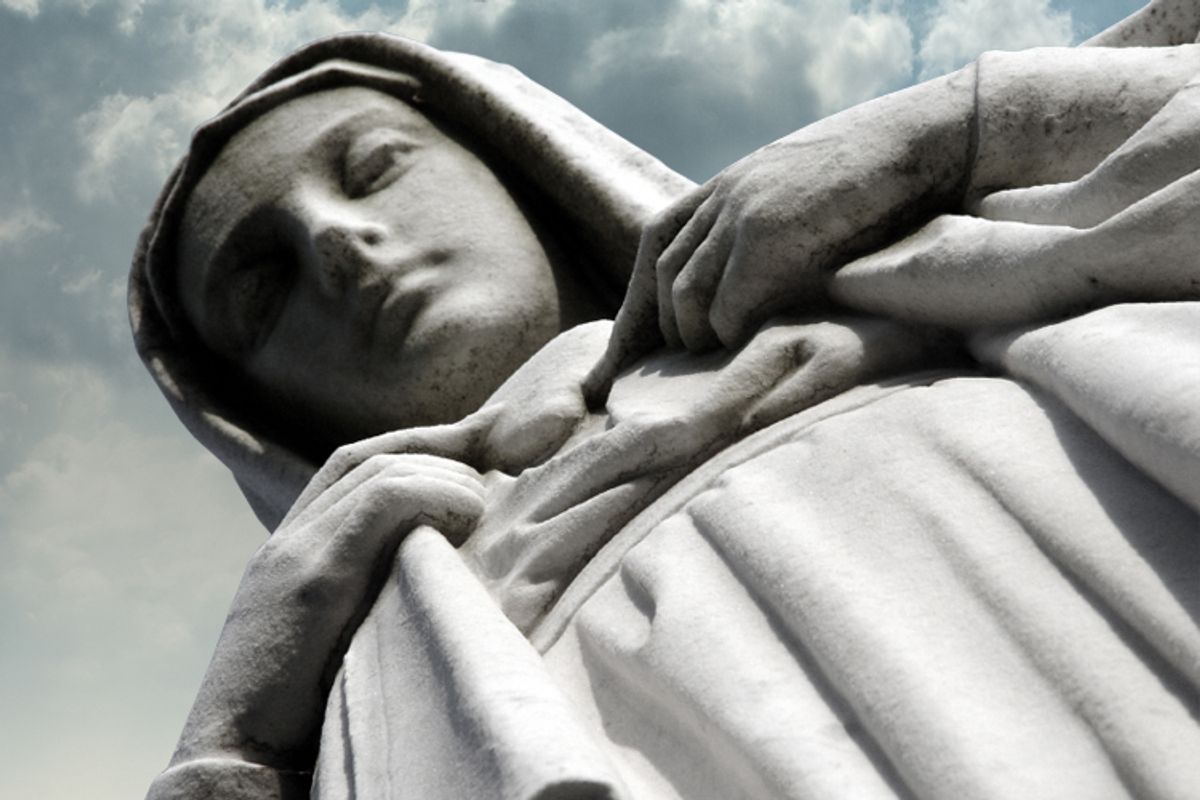 They have no headstones, no coffins. No memory boxes of toys and photographs. There are nearly eight hundred of them – and counting. They are the 796 babies and young children aged between two days and nine years whose grave, "filled to the brim with tiny bones and skulls," was found last week in an unmarked site that once housed a septic tank near a County Galway home for unwed mothers.

Local death records show that the children, mostly babies and toddlers, died during the years The Home, run by the Bon Secours Sisters, was in operation -- between 1925 and 1961. The causes of death listed include "sicknesses, diseases, deformities and premature births." A full tally of the bodies has not yet been made, and it's unknown yet if investigators will find more bodies than the ones whose deaths were recorded.

The grave was first discovered nearly forty years ago. In 1975, two boys playing in the area first uncovered a broken slab that revealed small skeletons underneath. As the Guardian reports, "a parish priest said prayers at the site, and it was sealed once more, the number of bodies below unknown, their names forgotten." But more recently, local historian Catherine Corless spearheaded a long overdue investigation into  what happened to the bodies of those children. She was inspired in part by her own memories of the children from The Home that she grew up with. "They were always segregated to the side of regular classrooms," she recently told Irish Central. "By doing this the nuns telegraphed the message that they were different and that we should keep away from them. They didn’t suggest we be nice to them. In fact if you acted up in class some nuns would threaten to seat you next to the Home Babies. That was the message we got in our young years." When Corless contacted the Galway registry to find out how many children had died there, she said the person at the office asked her, "Do you really want all of these deaths?" It was only then she learned the magnitude of her task. She is now fundraising to create a memorial for the mothers and children who passed through The Home. (You can contact her directly about donating: catherinecorless@hotmail.com)

The decades-long abuses of women and their children at the hands of the Catholic run institutions have been well established. They have served as the inspirations for films like "The Magdalene Sisters" and the recent Oscar nominated "Philomena." A 1944 health inspection report of The Home revealed an overcrowded facility full of children described as "poor, emaciated and not thriving," "pot-bellied" and "fragile," with "flesh hanging loosely on limbs." Though the full details of what happened to those children may never fully be explained, the strong implication of severe abuse and neglect cannot be ignored. But horrific as the record of deaths is -- a rate of at least one every two weeks, for decades -- and the cavalier way in which these tiny human beings were disposed of, it would be almost easy to consider these atrocities a thing of the distant past. Speaking on RTE last week, secretary of the Tuam archdiocese Father Fintan Monaghan said, "I suppose we can't really judge the past from our point of view, from our lens. All we can do is mark it appropriately and make sure there is a suitable place here where people can come and remember the babies that died."

First of all, oh hell yes we can judge. Judge away, everybody. Scream and yell to the rooftops about this one. This was systematic abuse that went on for 35 years at the hands of a religious order. This was a contempt for the children who lived within the walls of that institution that ran so deep it extended even into the way they were thrown away after they'd died there. You think your friend Jesus wouldn't judge you on that one, Father Fintan? I think he'd rip you a new one.

Second, don't think for one moment that what happened in that corner of Ireland isn't part of a continuing nightmare for women and children all over the world. Don't think it isn't exactly what you get when you let religion run roughshod over human rights. Don't think this isn't what happens when women are punished for being pregnant. This is your so-called culture of life. Look at it. Understand it. Do not forget it and do think it is in the past. Instead remember Savita Halappanavar, who just two years ago and just a few miles away from that Tuam location died "in agony" in a Galway hospital because she was denied a lifesaving abortion while she was miscarrying. Remember Dr. Walter Hern, who in the film "After Tiller" explained that his advocacy for abortion rights began during his time in the Peace Corps in Brazil, when he saw the pain and abuse and neglect inflicted on unwanted children, while women were dying nearby of botched abortions. Remember that nearly half of all abortions worldwide, right now, are unsafe.

Remember all of this the next time someone uses the words "dead babies" to talk about reproductive choice. Tell them there's a place in Ireland full of dead babies. Babies who were born to women who were exiled from their homes, even if they were pregnant as the result of rape. Babies who were not loved, not cared for, not treated with dignity even when they died. Say that they'll have a hard time finding that place now, but someday, Catherine Corless hopes, it'll be easier. She has the names of the children who died at The Home, children whose bodies were cast into the grounds near a septic tank. "I have the full list," she says, "and it’s going up on a plaque for the site, which we’re fundraising for at the moment. We want it to be bronze so that it weathers better. We want to do it in honor of the children who were left there forgotten for all those years. It’s a scandal."