"Citizen Koch": The movie about our sick democracy PBS tried to kill

Dumped by public TV, this long-brewing documentary explores the Koch brothers, Wisconsin and the death of the GOP 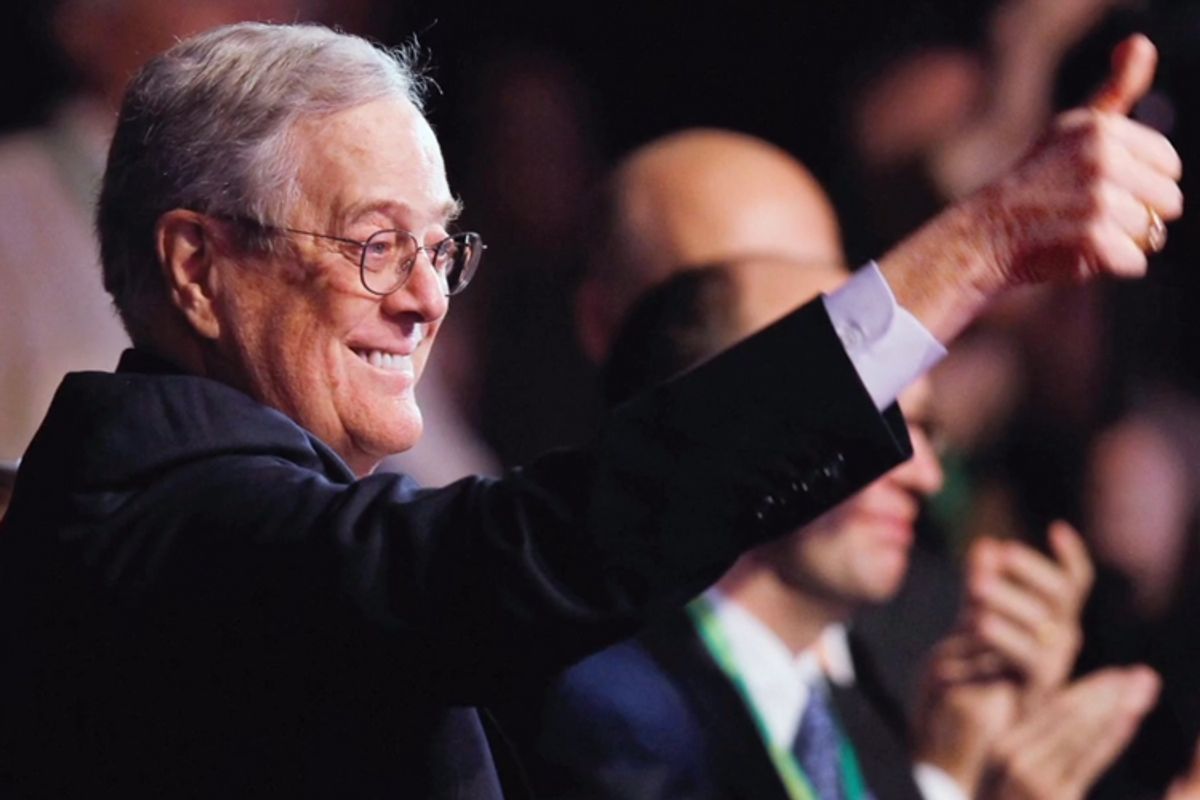 David Koch in a still from "Citizen Koch"
--

“Citizen Koch” is kind of a mess. But it's a mess well worth discovering for yourself -- and consider the history of its production and the situation it tries to capture. Filmmakers Tia Lessin and Carl Deal, co-directors of the Oscar-nominated Hurricane Katrina film “Trouble the Water,” premiered an early cut of the film at Sundance in January 2013. Largely filmed in 2011 and 2012 during the Wisconsin showdown between organized labor and Gov. Scott Walker, a Tea Party darling and Republican golden boy, which ended with the failed effort to recall Walker, “Citizen Koch” conveys the feeling of trying to glean meaning from yesterday’s headlines, with mixed success. Since then, Walker’s star has been considerably tarnished, as has that of his East Coast cognate, Chris Christie, while the Koch brothers failed in their quest to elect a Republican president and the Tea Party wave has ebbed (or been absorbed into the Republican mainstream, if you prefer).

Then there’s the reason why we’re seeing “Citizen Koch” in theaters more than a year after its debut. Originally to be titled “Citizen Corp” and focused on the aftermath of the Supreme Court’s Citizens United ruling, which allowed virtually unlimited corporate spending on issue campaigns, Deal and Lessin’s movie was intended for PBS broadcast. But the independent production company ITVS, which is funded by public broadcasting money and supplies films for PBS’ “Independent Lens” series, pulled the plug on this project last year for reasons that remain murky. Or at least for reasons that those involved want to remain murky; as Jane Mayer’s New Yorker story about the whole affair suggested, if you follow the money it doesn’t look all that mysterious.

At some point, “Citizen Koch” acquired a new title to go along with its focus on the activities of right-wing energy billionaires Charles and David Koch, who bankrolled Walker and a host of other extremist anti-labor Republicans during the 2010 and 2012 election cycles. David Koch, interestingly enough, is a major donor to public television, and has given an estimated $23 million to PBS and its affiliates over the years. He’s a trustee of WGBH in Boston, and at the time of the “Citizen Koch” brouhaha also sat on the board of WNET in New York. (In fairness, Koch’s philanthropy is visible all over the place. On the day I wrote this story I walked past a New York subway ad for a performance at the David H. Koch Theater in Lincoln Center, home to the New York City Ballet.) WNET president Neal Shapiro had already gone to extraordinary lengths to placate David Koch after he was unfavorably portrayed in “Park Avenue: Money, Power and the American Dream,” a film by Oscar-winning documentarian Alex Gibney that was broadcast in 2012.

Officials at ITVS have insisted that they pulled the funding for “Citizen Koch” essentially because they didn’t like the film, and not because they got leaned on by Shapiro or the Koch brothers or anybody else. Lessin and Deal saw it differently: “This wasn’t a failed negotiation or a divergence of visions; it was censorship, pure and simple. It’s the very thing our film is about – public servants bowing to pressures, direct or indirect, from high-dollar donors.” PBS ombudsman Michael Getler looked into the whole thing and threw up his hands: Who can know anything for certain amid the informational wilderness of our society? He did admit that “what we may be dealing with here may be a form of self-censorship in which officials at ITVS, and maybe at WNET and PBS itself, become wary of the impact of another PBS-distributed film critical of a hugely wealthy and politically active trustee,” one who was reportedly contemplating “a new, very large gift” to public broadcasting. (Emphasis in the original.) He did not pause to inquire what the term “public broadcasting” means when it depends on the generosity of wealthy private individuals. Reading between the lines, it sounds as if PBS and/or WNET lost a whole bunch of money after the Gibney film, and were anxious to stop the bleeding. (But that’s really just a guess.)

Armed with all that publicity, Lessin and Deal raised more than $170,000 on Kickstarter – slightly more than their initial PBS completion budget – and here’s their movie. After all that, it’s somewhat disappointing to report that “Citizen Koch” largely consists of stuff political junkies already know or will remember clearly, and that it sometimes feels like a mosaic of incompatible fragments. There are more than a few eye-opening moments: I had forgotten the improbable-but-true prank call in which a journalist posing as David Koch phones Scott Walker and discusses the possibility of planting “troublemakers” amid the pro-labor protesters at the Wisconsin Capitol building. It’s not exactly a revelation at this point that Teflon populists like Walker function in political terms as wholly owned subsidiaries of corporations and the ultra-rich, but it’s still disheartening to observe in action. To me, the most interesting subject of “Citizen Koch” – one the movie never quite articulates – is the perversion of the Republican Party into a thoroughly duplicitous instrument of wealth.

Lessin and Deal spend considerable time in the homes of working-class white Wisconsinites who identify as Republican but felt bewildered and betrayed by Walker’s extreme union-busting tactics, which arguably had much less to do with budget-cutting than with breaking the political power of organized labor. They also devote a seemingly inordinate amount of attention to Buddy Roemer, the former Louisiana governor who ran a brief and quixotic 2012 Republican presidential campaign that went nowhere. But there’s method to the madness: Roemer’s an appealingly crusty character who refused to take PAC money and ran as what might be called a Teddy Roosevelt Republican, opposed to corporate power and in favor of campaign-finance reform. (This isn't in the movie, but he did a memorable walk-through of Zuccotti Park during the Occupy Wall Street heyday.) Many of those Wisconsin small-town Republicans might have loved Roemer, if they’d ever gotten to hear about him. But his version of small-business libertarianism and individualism, once the philosophical bedrock of the GOP, is not permissible within that party today.

One could make the same criticism of the Democratic Party, albeit in a less exaggerated form. It’s increasingly a party of lifestyle liberalism and metropolitan cool: We’ll give you gay marriage if that’s what the brand requires, but Wall Street power and privilege is off limits. That points toward the real issue behind the “Citizen Koch” saga as well as the movie itself. Whether you feel any sympathy for Buddy Roemer’s Republicanism is not the point. At least it possesses a certain ideological coherence, and is not rooted in a toxic combination of racial panic at the bottom and cancerous piles of money at the top. For all the overheated partisan rhetoric of Washington, we only have the simulacrum of political debate in America, and hardly ever the real thing. Political debate only happens behind closed doors, where you and I aren’t invited, and anyone who brings up this obvious fact must be exiled or marginalized.