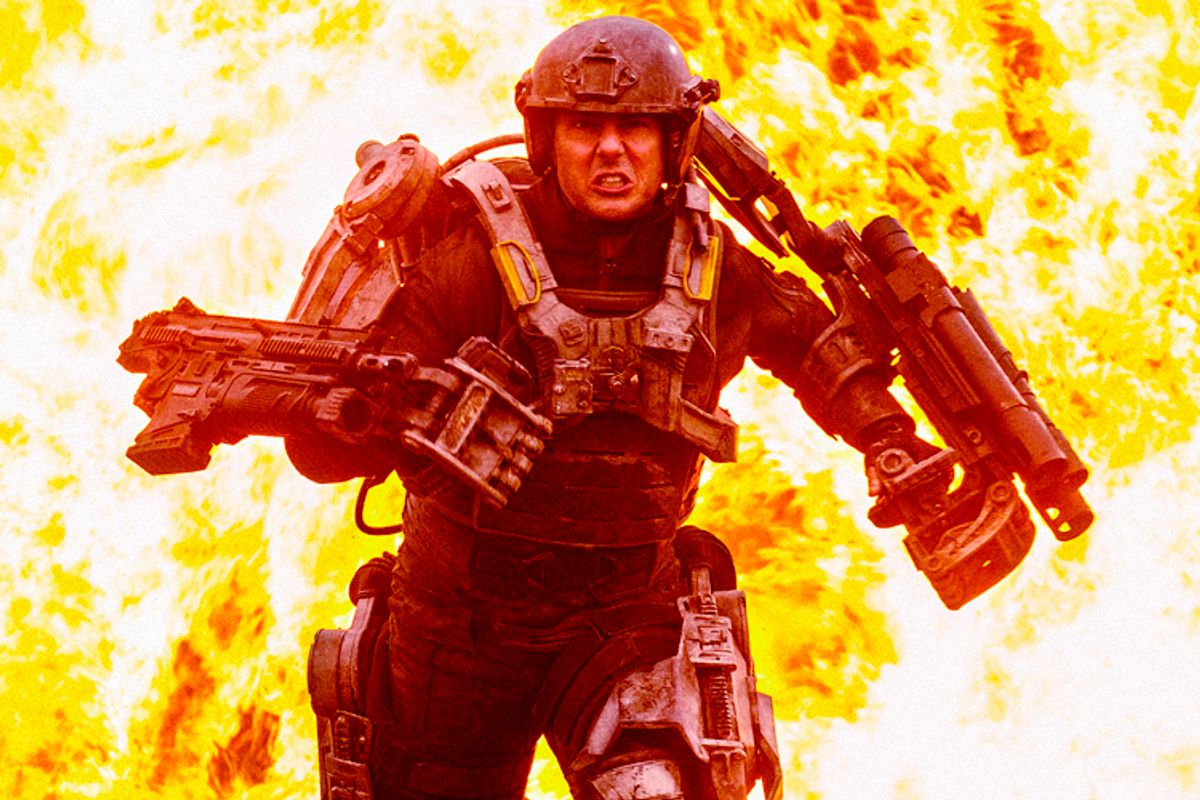 Tom Cruise in "Edge of Tomorrow"
--

Lots of people I like and respect are already jumping out of their seats for “Edge of Tomorrow,” a high-octane Tom Cruise action thriller that – as approximately everybody has observed – combines “Groundhog Day” with “Independence Day.” I would actually throw in a different comparison: It’s an effort to blend the DNA of “Source Code” with that of “Starship Troopers,” but one that strips away exactly the things that made those movies awesome: the subversive, sardonic humor in one case, the romantic fatalism in the other.

There’s unquestionably a high degree of cleverness and craft at work in “Edge of Tomorrow,” a high-concept near-future war flick that plays out an elaborate plot conceit as long as it possibly can before devolving into routine suck-on-this alien-vs.-human CGI battle sequences. It’s almost certainly a huge summer hit that will solidify Cruise’s post-Oprah comeback as a box-office champ, just in time for his 52nd birthday. “Edge” was directed by veteran Hollywood style maven Doug Liman (of “Go” and “The Bourne Identity”), whose biggest contribution to cultural history may have been making the film that got Angelina Jolie and Brad Pitt together, and it was shot on actual 35mm film by cinematographer Dion Beebe. (One intriguing subtext of the last year or so in movies is that the film medium isn’t dead after all.)

In that Groundhoggy high concept I’ve mentioned, Cruise’s character, a scaredy-pants P.R. officer named Major William Cage, must relive the worst day of his life over and over again until he can find his way out of the maze. Having refused a direct order to cover the Normandy invasion of this particular alien war from the front lines – and that’s not a metaphor, by the way; it actually is an invasion of Normandy, a fact whose historical significance appears lost on everyone in the movie – Cage finds himself doped, stripped of his rank and dumped into the infantry as an accused deserter. This time around, the D-Day invasion goes a whole lot worse than the one everybody has forgotten about from 1944. (I know: Maybe that never happened in this timeframe! I’m so far ahead of you.) The squidlike robot-fungus-“Matrix”-“Predator” thingies from outer space who have conquered continental Europe are waiting, and the days of human dominion over planet Earth are, like, way numbered. Oh well!

Here’s the thing: The first time through, the loud, ultra-violent and bewildering carnage and chaos of the disastrous battle was tremendously exciting, even though I was aware at the time that I was overdosing. It’s like watching the opening sequence of “Saving Private Ryan” at three times normal speed, while mainlining a blend of methamphetamine, testosterone and death metal. I felt unable to decide between this movie is the most badass thing ever and OMG turn it off. Then Cage wakes up at the beginning of the day, with some drill sergeant yelling at him, and we get to watch it all over again. No, it’s never exactly the same; stuff gets left out and other stuff added, and Cage gradually groks that the key to escaping the bad acid trip is that he needs to make contact with Special Forces hotshot Rita Vrataski (Emily Blunt), heroine of the great human victory at Verdun. (Which is a World War I reference, and not a felicitous one: The 10-month Battle of Verdun in 1916 may hold the title of most pointless slaughter in human history.)

But a lot of it’s the same, and much of the situational humor in “Edge of Tomorrow” rests on the question of how Cage will react to these endlessly recycled crises: Does he supply the punch lines to his comrades’ gallows-humor jokes, or warn them that they’re about to get shot out of the sky and slaughtered by giant whirligig beetles? Is it worth trying to save the cheerful dude who went into battle wearing only a jockstrap under his futuristic body armor, and who gets squished every time around? How many iterations will it take for Cage and Rita to get off the beach alive and launched on their greater quest? One useful consequence of this endlessly rebooting video game, of course, is that Cruise’s character gets hardened and manned up from all that battlefield experience. He is transformed from a smug and callow coward into, well, Tom Cruise, a detail-oriented stone-cold killer with a sleek veneer, a clipped wit and absolutely no fear of death, since death just means looping back to the morning and trying again.

There’s a whole lot of superficial or mechanical cleverness to this construction, whose screenplay has evidently been much reworked but is credited in final form to Christopher McQuarrie (a Cruise ally) and the team of Jez and John-Henry Butterworth (Liman allies). Hey, that’s not something to sneeze at: Mechanical cleverness is pretty much what thrillers are about. But your reaction to “Edge of Tomorrow” is all about whether you can surrender to its hyper-macho action-movie fugue state and find benumbed pleasure therein. The fact that this movie is about a guy with PTSD and is also a movie that deliberately induces PTSD in the viewer may establish that Liman and his writers are more intelligent and self-aware than, say, Michael Bay, who never requires elaborate narrative excuses to make his spectacles more and bigger. It does not, however, establish that their movie is better than a Michael Bay movie.

If you want me to grade on a curve, from inside the Hollywood paradigm, then fine: Of all possible movies in which Tom Cruise and a female star much younger than he charge around in silly G.I. Joe costumes from the future, killing monsters while things go boom, how is “Edge of Tomorrow”? Pretty good! It has enough plot density to hold your attention for a while, along with a few feints at character development. You might not much notice its fundamental dishonesty and mendacity, except as that odd sick feeling you have later. If, on the other hand, you find the combination of jittery, assaultive editing and relentless, all-purpose adolescent war fever disturbing and not at all pleasurable, then you have already woken up from the dream and don’t need to experience this overamped spectacle even once.