Melissa McCarthy can dress herself

After being spurned by designers, the actress sets out to create a clothing line 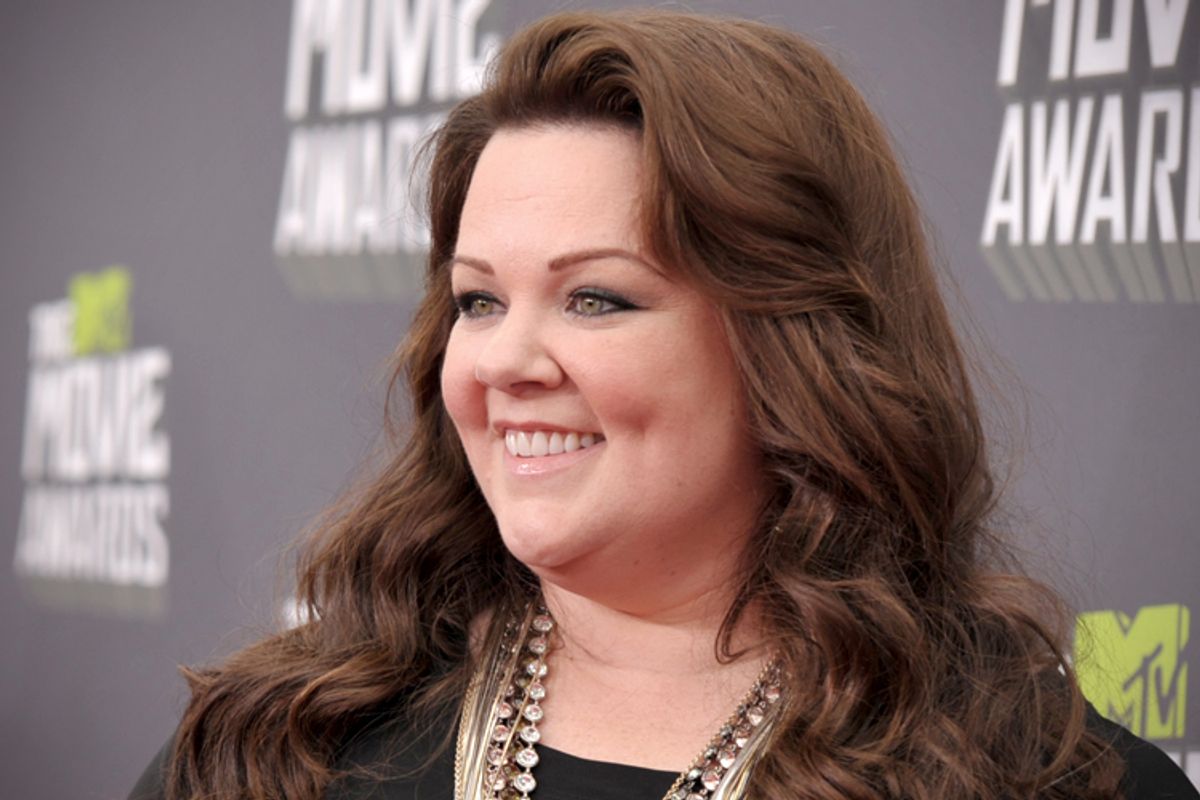 She's an Emmy winner, an Oscar nominee, a fashion magazine cover star and a bona fide Hollywood A-lister. Sounds like the kind of woman designers would be lining up to dress. But Melissa McCarthy is not a willowy former model or a woman who wins prizes for starving herself. Which means, as she bluntly explains in the new issue of Redbook, "When I go shopping, most of the time I'm disappointed." The actress goes on to say that "Two Oscars ago, I couldn't find anybody to do a dress for me. I asked five or six designers — very high-level ones who make lots of dresses for people — and they all said no."

McCarthy eventually went to the Oscars in a gown from plus-sized ready-to-wear brand Marina Rinaldi – a move that put her on the "worst" list for an ensemble critics said "failed to flatter the Supporting Actress nominee." Similarly, when Oscar nominee Gabourey Sidibe appeared at the Golden Globes this winter in an elegant white gown, she faced a storm of nasty commentary -- which she deftly shut down, by the way -- for daring to show up in public large and unapologetic.

The business of dressing women – even women at the upper echelons of the entertainment business – can be an unforgiving game. Earlier this year, Vanity Fair profiled several prominent Hollywood stylists, in a feature that revealed how even successful, smaller-size women can find themselves shut out. The designers can put a woman – like a less than beloved reality star -- on its "Do not shoot" list if she doesn't fit its aspirational image, and powerful actresses can dictate to designers that they don't "want a certain type of person in the brand." But McCarthy's openness with her struggle for decent, fashionable clothing to wear while she's walking the red carpet only throws into the spotlight how narrow in every sense of the word the industry really is. Four years ago, Christina Hendricks revealed a similar frustration, telling Glamour, "It is difficult come awards season, and I need to find a gown to walk down the red carpet in, and there are only size zeros and size twos available. Then it becomes downright annoying because all these designers are saying, 'We love "Mad Men," we love Christina, but we won’t make her a dress.'"

Unlike most women who find themselves "disappointed" by the options from clothing makers who forget that humans come in varying sizes, McCarthy has a background in design. Back in 2011, she told Us, "I went to school for clothes and textiles, so I always thought I was going to do women's clothing anyway. [Then I went] from FIT to doing standup, so I feel like I am going back to it." Now McCarthy is moving forward with designer Daniella Pearl – with whom she collaborated on her "wildly comfortable" 2011 Emmys gown after she "just didn't see anything that I liked out there" -- to create Pearl, a line of clothing to help women "feel good about themselves."

It seems pretty obvious, but in a world in which the phrase "flaunts post baby body" is a near-daily headline and Jennifer Lawrence is considered "fat," it's no bikini-clad day at the beach to be an overweight female -- even one who's as genuinely beautiful as McCarthy. "Trying to find stuff that's still fashion-forward in my size is damn near impossible," she told the Hollywood Reporter in 2011. "It's either for like a 98-year-old woman or a 14-year-old hooker, and there is nothing in the middle." Yet McCarthy has not only managed to carve out a hugely successful career, she's done it stylishly. And she's done it while allowing herself to be a voice for other frustrated women who'd maybe like to wear nice things designed by people who don't seem to have an obvious hatred of female bodies. By speaking out and thinking entrepreneurially, she's telling the world that all women deserve the basic respect that comes from being able to find wearable clothing. You don't want to make dresses for Melissa McCarthy? Fine, cowards. She and her collaborators will make her own. And then ladies, they'll make you one too.