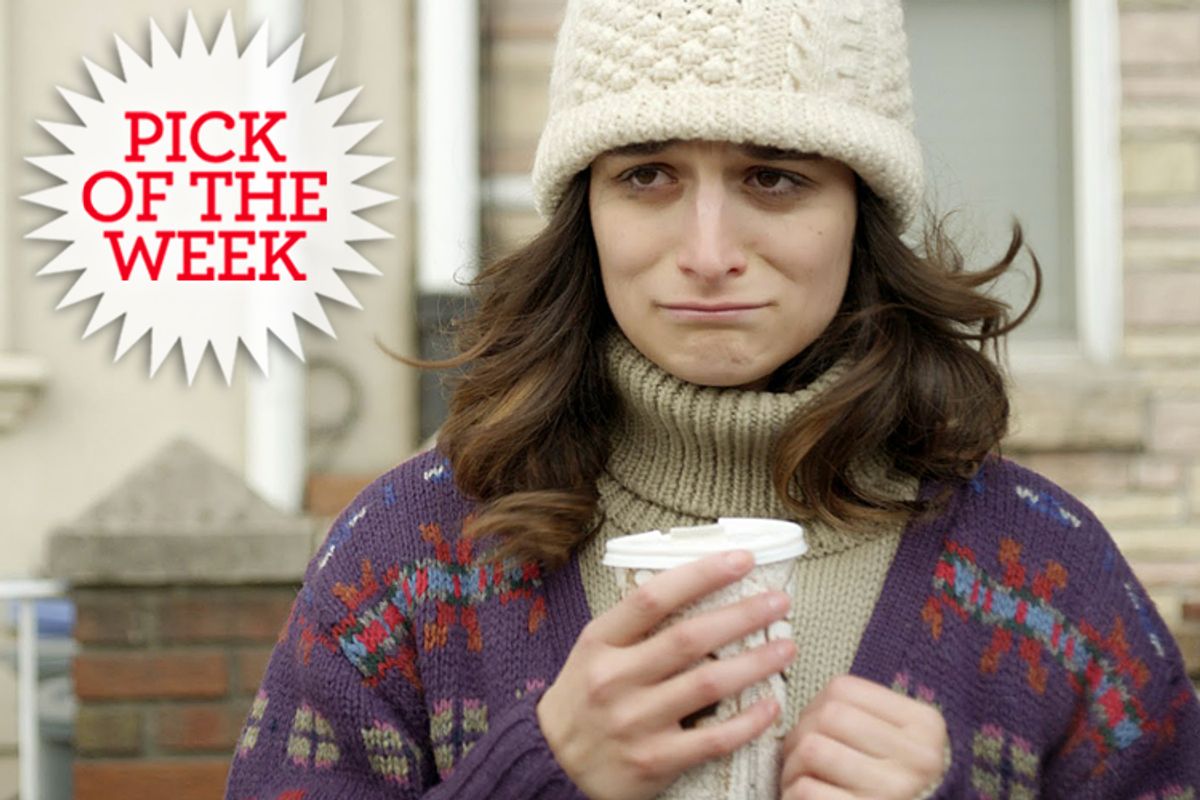 What makes a movie, or any other cultural work, “important”? Of course craft and artistry matter, but those are difficult qualities to measure in the moment, and any number of masterpieces went unnoticed upon their creation. “The Great Gatsby” and “Vertigo” were flops; Franz Kafka and Herman Melville died as unknowns. Sometimes, being important is about hitting at the right moment. Nobody’s going to confuse Gillian Robespierre’s likable rom-com “Obvious Child” with the best of Howard Hawks and Ernst Lubitsch, but for many women who see it – and quite a few men too – it will instantly become a landmark moment in cultural history.

“Obvious Child” is often scabrously funny in a post-Lena Dunham, post-Woody Allen New York comedy vein, and finds a star performance in the thoroughly unlikely personage of Jenny Slate, a standup comic and actress best known for her TV roles on “Parks and Recreation” and “House of Lies.” (She was briefly a “Saturday Night Live” cast member, several seasons ago.) Slate is not conventionally beautiful; during a comedy routine in the movie, she makes fun of her own appearance by suggesting that she resulted from a sexual union between Natalie Imbruglia and a menorah. (Except that she doesn’t say it quite that way.) But she’s a veritable dark star of crazy-sexy screen energy as foulmouthed, acerbic and frequently intoxicated comic Donna Stern, a character pretty close to Slate’s own life experience.

This full-length version of “Obvious Child” is based on a 23-minute short that Robespierre made with Slate in 2009, and it has much of that authenticity people responded to in the first season of “Girls,” and perhaps grittier than that. It’s a movie made by people who understand the grind of the New York comedy scene from the inside, and who have done their time in crappy shared apartments in the less hip, fringier neighborhoods of Brooklyn. David Cross of “Arrested Development” plays a brief but significant role, and Gabe Liedman, a writer on “Brooklyn Nine-Nine,” plays Donna’s comic mentor and self-aware gay best friend. Her slightly overamped, righteous-feminist female best friend is the terrific Gaby Hoffmann, an occasional cast member of “Girls” and the frequently naked star of the weird and underappreciated indie “Crystal Fairy & the Magical Cactus.”

But if all those things help explain that “Obvious Child” is a romantic comedy with a hangover and dirt under its nails, one that steers away from easy stereotypes and gives us a screwed-up heroine who’s easy to root for, they don’t explain the strong reaction the film provoked at its Sundance premiere, and ever since. There’s no point wussying around with spoiler alerts here, since virtually the entire potential audience for this movie knows the deal. Donna gets abruptly dumped by her boyfriend in the unisex bathroom of a comedy dive-bar (to be fair, she has just used the decline of their sex life as fodder for a routine), and a few nights later she goes home with a total stranger, an ultra-square, ultra-goy business-school type. It’s just sex: He’s a good-looking guy, but one who wears loafers and an Oxford shirt. She doesn’t really know him, and has no plans to change that.

So the radical premise of “Obvious Child” – at least, it’s radical in the world of rom-coms, and there are still numerous people in the real world who profess to disbelieve it – is that sometimes women use men just to get laid, without thinking much about emotions or the wedding registry or even “Will he call me tomorrow?” Donna sneaks out of bed in the morning, panties in hand, and doesn’t particularly want Max (Jake Lacy) to call her. When he stops by the dying Greenwich Village bookstore where she works – by the way, out-of-towners, Unoppressive Non-Imperialist Bargain Books really exists – she totally blows him off. Oh, she’s really busy at the store and a friend has been sick and maybe she’ll have to go to L.A. for a TV thing and so on. Max gets the message and moves on. Donna does not plan to tell him that she got pregnant from their one night together, and is having an abortion.

Yeah, that’s the thing here. Donna’s pregnancy and her decision, and the event itself, are certainly major plot points in “Obvious Child.” But abortion is not presented as a major moral dilemma or a particularly painful decision or a trauma that’s likely to change Donna’s life. She’s single and broke and she drinks too much; she did something stupid and is now taking responsibility for it. If she goes through the thought-experiment of whether she should have a baby, the answer comes back to her in roughly 0.8 seconds: No way, with another word between the “no” and the “way.” As every woman who sees this movie will reflect, Donna is relatively privileged (even though she has no medical insurance in this pre-Obamacare world): She lives in New York City, where no one questions her right to make her own decisions about her body. The procedure is safe, uncomplicated and undramatic, more like a visit to the DMV or the dentist than like major surgery.

If people who sincerely believe that abortion is equivalent to murder are outraged by the way Donna’s decision and its effects are presented in this movie, they probably should be. From that point of view, “Obvious Child” can only be a testament to the total depravity of our society. As for the more complicated but presumably more common perspective that abortion should be legal but is a morally fraught matter always to be treated with immense seriousness – well, people who feel that way won’t be delighted either. On one hand, Robespierre is simply capturing the reality of lived experience: For thousands of women in metropolitan areas and the coastal states, abortion is the result of a personal error in judgment and no doubt something they would rather have avoided. But it’s just not that big a deal. Does an abortion become part of a woman’s life experience, and probably not the best part? Of course. But so do lots of other things, big and small, and to speak of it as intense or unique trauma is, for most women, simply not accurate.

Not only does “Obvious Child” violate the near-total pop-culture taboo on depicting abortion as a normal life event experienced by many young women, it goes a great deal further than that. The abortion itself becomes a pivot point in the slow-developing relationship between Donna and Max, and in a surprising fashion. It isn’t the obstacle they have to overcome, or the force that threatens to tear them apart; ultimately, it’s the thing that brings them together. Max has worn down Donna’s resistance a little, and forced her to consider the possibility that he’s not just the cute frat boy she screwed that one time but also a person worthy of her respect and attention. Her theatrical method of telling him the truth, and his response, is what gets us to the obligatory rom-com ending, with overtones of possibly-maybe-happy-ever-after. The historic moment of “Obvious Child” is not about saying that abortion is safe and legal and that’s a good thing. It’s about saying that abortion gave these two people a shot at true love.

”Obvious Child” is now playing at the Angelika Film Center in New York and the ArcLight Hollywood and the Landmark in Los Angeles. It opens June 13 in Boston, Chicago, Minneapolis, Phoenix, San Francisco and Washington; and June 20 in Atlanta, Dallas, Denver, Portland, Ore., San Diego, Seattle and Stamford, Conn., with wider release to follow.